Holden has committed to keeping both the Commodore bodyshape and the V8 engine in Supercars until at least the end of the 2021 season.

While it's expected the category will introduce revised technical regulations ahead of the 2021 season, Holden says it won't make an immediate jump to a new package when the new rules kick in.

Instead the brand will stay true to its four-door Commodore bodyshape for at least the life of its recently-announced new two-year factory Supercars deal.

It's also set to stick with the current five-litre V8 engine for the foreseeable future, with no plans to revive the twin-turbo V6 programme that was shelved early last year.

"Commodore is our contract car and the V8 that has been developed for it will continue on."

There has been speculation that a second GM product could join Supercars, with Walkinshaw Andretti United having genuinely investigated bringing the Camaro in to take on Ford's Mustang.

That plan has been put on ice as WAU continues to lobby for a change to the control chassis, which is highly unlikely until at least 2021.

When pressed on Holden's take on the Camaro, Aquilina reiterated his support of the Commodore.

"[Talking] about the sphere of influence, we’re only interested in the Commodore with the V8," he said.

"That’s really what we’re here racing for and with. That’s our hardware, it’s what we’ve built our plans around.

"We talk to GM all the time and the only conversation we have is about Commodore." 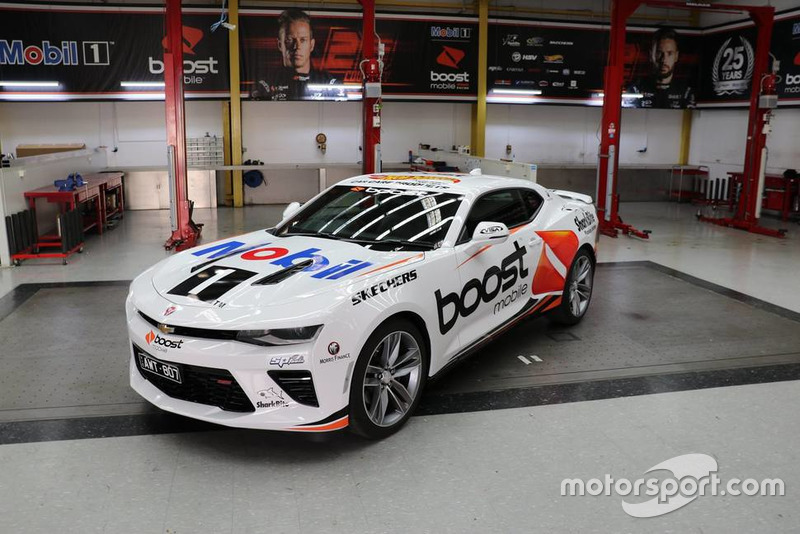 Camaro on the road trip

As for the ongoing use of the pushrod V8 engine, Aquilina said he's not concerned about a lack of an eight-cylinder powerplant in the current Commodore road car range.

"From a marketing standpoint, that’s less important, [with] the connection between the powertrain on the track and what’s happening on the road being detached quite some time ago," he said.

"I think it’s in our collective interest that the sport is the most appealing and attracts an audience and still has the noise and excitement level.

"That should be the primary concern of the sport.

"Then, from a marketing standpoint, how can we then utilise our long-term association now and into the future to associate some of our brand with that excitement?

"As much as it’s a showcase of Commodore and the powertrains that come from General Motors, it’s also not a bad place to communicate other products we sell in the showroom, that happen to be a full range of SUVs and a Colorado truck.

"That’s what people are buying, that’s the sort of cars people are interested in buying.

"It does tick the box from that perspective. It’s just a very different way to what it did in the past with touring cars and production car racing.

The 2022 Supercars season continues this weekend with the Sandown SuperSprint.

The famous Sandown circuit will host the ninth round of the 2022 Supercars season this weekend.

Thomas Randle will run a tweaked livery for the Sandown SuperSprint weekend as part of a fundraising effort for a cause close to his heart.

Grove Racing has confirmed that Matt Campbell will partner David Reynolds for the Bathurst 1000 while Matt Payne will be paired with Lee Holdsworth.