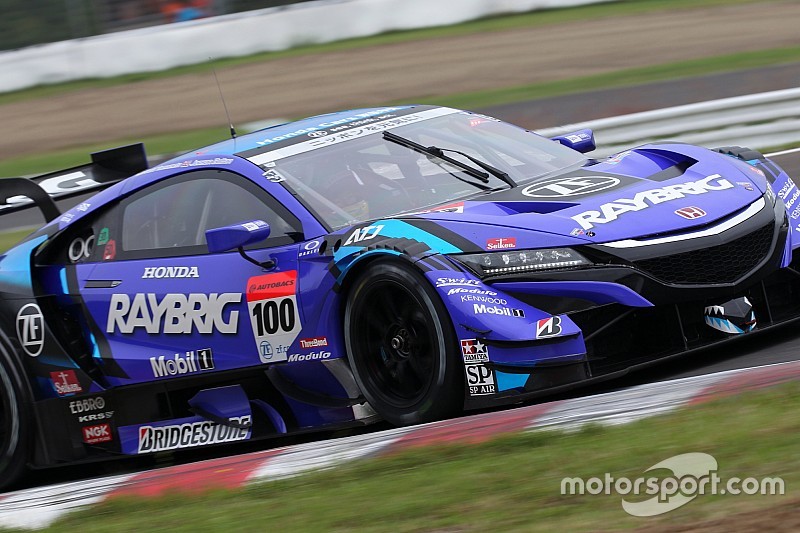 Jenson Button and Naoki Yamamoto retook the Super GT championship lead with victory in the sixth round of the season at Sugo.

Yamamoto started the race from pole position and immediately began to pull away, building a seven-second lead by lap 16.

However, traffic from GT300 cars nullified his lead in a matter of laps, bringing the Impul Nissan of Jann Mardenborough into contention.

With Yamamoto unable to pick up the pace after returning to clean air, Mardenborough dived down the inside of the Japanese driver at Turn 1 to move into the lead.

Yamamoto, however, still managed to hold on to the back of the Nissan GT Academy graduate and on lap 35 Team Kunimitsu pulled the trigger, calling him into the pits.

Mardenborough stayed out for another three laps and lost time in the pitlane, with the result that teammate Daiki Sasaki barely came out a few seconds ahead of Button - and on cold tyres.

Button spent no time sitting behind Sasaki, slipping past him at Hi-Point to snatch back the lead.

He managed to build a one-second buffer immediately and when Sasaki ran wide at the final corner a few laps later, the path was cleared for Button to take his first victory in the series.

However, Button suffered a brief scare when he missed the apex at the last turn in similar fashion to Sasaki - depositing grass on the car’s inlet - and then a safety car had to be called in for a crash between two GT300 cars.

That left a six-lap dash for victory between Button and the ARTA Honda then driven by Tomoki Nojiri, who had passed the struggling Sasaki before the safety car.

Button and Nojiri ran within a second each of the other in the sprint to the finish, but the former managed to hold on to score his first victory in any category since the 2012 Brazilian GP.

Nojiri and Takuya Izawa had to settle for second, but the result ensured another 1-2 finish for Honda, just weeks after they were slapped with a 10kg weight increase to ensure equivalency of performance with its conventional front-engined cars from Nissan and Lexus.

Behind the leading Hondas, Sasaki managed to fend off the Mugen Honda of Daisuke Nakajima and Hideki Mutoh despite overheating issues to secure the final spot on the podium.

Zent Cerumo duo Hiroaki Ishiura and Yuji Tachikawa ended up fifth in the leading Lexus, ahead of the Kondo Nissan of Joao Paulo de Oliveira and Mitsunori Takaboshi.

The in-house Nismo car of Ronnie Quintarelli and Tsugio Matsuda recovered from a poor qualifying to finish seventh, just ahead of the B-Max Nissan of Satoshi Motoyama and Katsumasa Chiyo.

Felix Rosenqvist and Kazuya Oshima finished ninth in the Team LeMans Lexus despite slipping to the rear of the field in the early part of the race, while the top 10 was completed by the Real Racing Honda of Koudai Tsukakoshi and Takashi Kogure.

Ryo Hirakawa, who headed the championship coming into Sugo alongside Nick Cassidy, crashed his #1 TOM’S Lexus a few laps from the finish, while Bertrand Baguette likewise shunted his Nakajima Honda that he shares with Kosuke Matsuura.

Update: Rosenqvist and Oshima were handed a post race penalty, dropping them to 11th and promoting the Sard Lexus of Kamui Kobayashi and Heikki Kovalainen onto the final points-scoring position.

Takuto Iguchi and Hideki Yamauchi crossed the chequered flag six seconds clear of the #10 Gainer Nissan of Kazuki Hoshino and Hiroki Yoshida, which hadn’t scored a podium so far in 2018.

The next three cars finished within 0.065s of each other, with the #00 GoodSmile/Team Ukyo Mercedes pair of Nobuteru Taniguchi and Tatsuya Kataoka claiming the final spot on the rostrum by the smallest of margins.