Kondo Racing driver Fenestraz came out on top of an intriguing strategic battle, as the race was turned on its head by the second safety car period that coincided with the start of the pit window.

The Franco-Argentine driver, who led the early laps after out-dragging poleman and championship leader Tomoki Nojiri at the start, was the among the majority to clear his mandatory stop on lap 10 of 53, leaving him down in eighth place behind seven cars that opted to stay out on track.

But Fenestraz was able to maintain his pace despite being stuck behind slower cars until the closing laps, and as those ahead pitted he took a relatively comfortable victory on his first visit to Sugo in two years.

That was because he missed most of the 2021 season due to visa trouble, only arriving for the final two races of the year - and that followed a bruising rookie season in which he finished only three times out of seven.

"It's my third year in Super Formula but last year I just did a few races, and in 2020 unfortunately in nearly every race I had a DNF because of problems," said Fenestraz. "It’s been a long time coming.

"I'm also very happy for Kondo Racing. Last year was very difficult for Kondo Racing, now we’re back on the top spot. Unfortunately, Kenta [Yamashita, teammate] had a little contact [at Turn 1], but generally the team was very strong. Hopefully we can stay like that for most of the season." 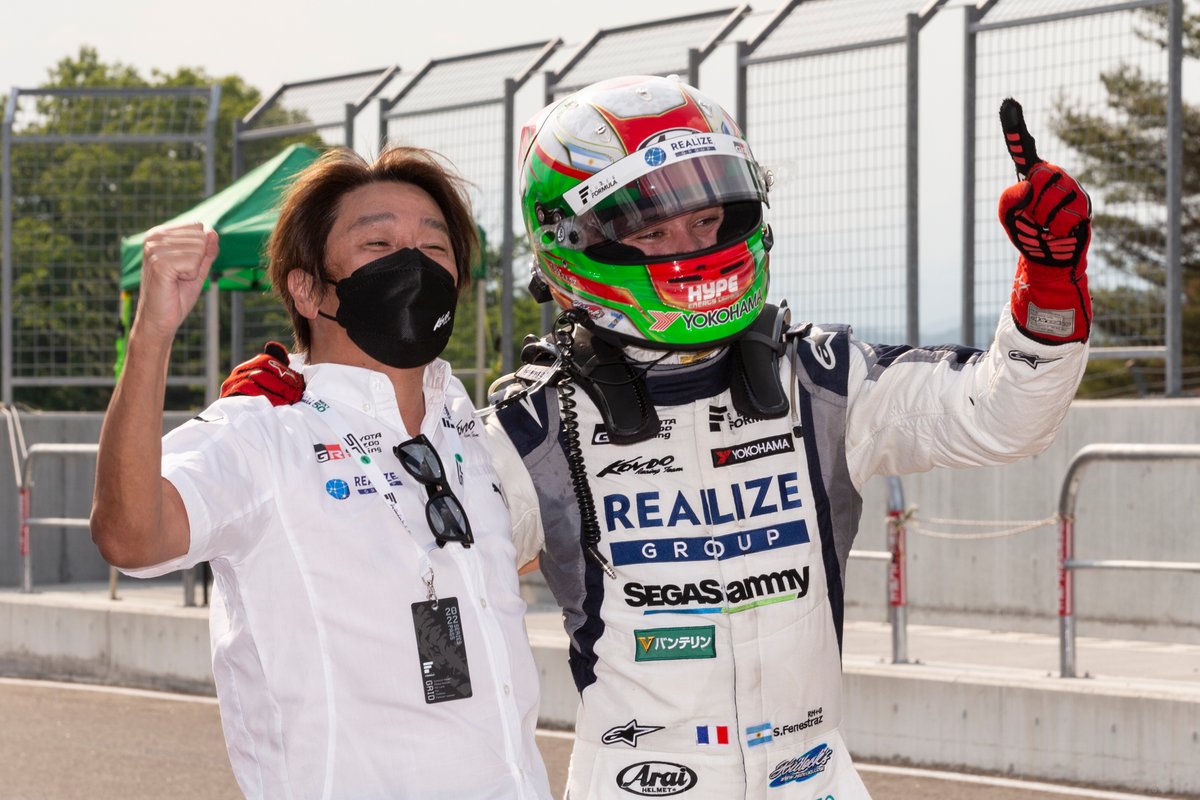 Fenestraz's win also marked a first for Kondo Racing since 2019

Describing the crucial phase of the race where he was stuck behind rookie Atsushi Miyake, the last of the group of seven to stay out on track during the safety car period, Fenestraz said tyre management was key.

"I knew it was going to be very difficult to overtake here at Sugo, so I just stayed behind," he recalled. "I was really trying to be careful with the tyres. I knew I had to do about 40 laps on the same tyres, so I left a space to Miyake to have some clean air. We were quite a lot faster so it was really difficult.

"I had to be patient and calm and just wait, and just trying to be careful with the tyres. Once they pitted in front, I had some clean air, the car felt ok, I had some good grip left, so I think we did a good job."

TOM'S driver Ritomo Miyata inherited the lead by staying out on track behind the safety car, at one point enjoying a 27-second buffer over Fenestraz before his tyres dropped off in the closing stages prior to his pitstop.

Asked if he felt worried at any stage about potentially losing out on the win, Fenestraz replied: "A little bit in the last 15 laps. Not because of the cars behind, but because of the gap to first place.

"I could see there was a big gap in front [of Miyake] to [Kamui] Kobayashi. I was just scared that the first-place car [Miyata] would overcut us. I was a little bit concerned at that point, and also I asked the team to not talk to me [over the radio] because I wanted to do my own race.

"I didn’t have that information as I just couldn’t overtake Miyake. Let’s say the last 10, 15 laps I was a bit worried because I didn’t know where the first-place car would come out after he pitted."

Fenestraz's first Super Formula win keeps him third in the drivers' standings, now just seven points behind second-placed Ryo Hirakawa - who finished seventh - and 24 behind leader Nojiri, who was third behind Toshiki Oyu.