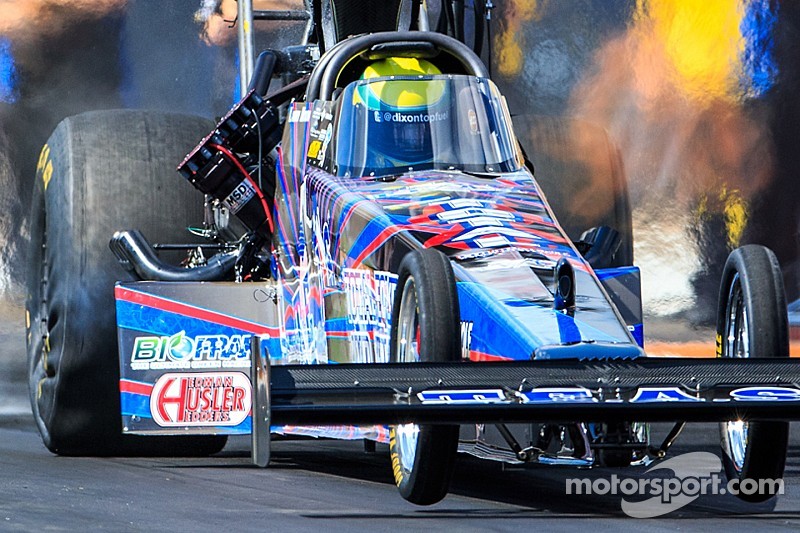 Suffering a structural failure nearing the finish line at 300 miles per hour in a top fuel car is scary, but the extremely rigid safety systems surrounding the driver allowed Larry Dixon to walk away from a terrifying crash.

During a race at Memphis 15 years ago, Larry Dixon took a similar ride to the one he experienced during the third round of qualifying for the NHRA Gatornationals at Gainesville, FL today. The results weren’t nearly as good: he blacked out, broke his leg, got a concussion and had various other maladies that sent him for a trip by helicopter to hospital. And kept him out of action for a long time.

That was such a good car.

Today’s impact, when the front end of Dixon’s  Bob Vandergriff Racing (BVR) 2010 PMI Top Fuel dragster broke off, Dixon had the benefit of a HANS device, his dragster has NHRA mandated safety devices including seven-point hardnesses and, while he flew through the air and landed hard, Dixon wasn’t injured more than some pain in his upper back and stretching of his knee ligaments, he said.

Safety devices did their job

Larry Dixon purchased a HANS device shortly after his Memphis incident and credits that, along with NHRA’s ongoing safety measures for allowing him to walk away from an incident that, years ago might have killed the three-time Mello Yello Drag Racing Series champion. Instead, he may check in with doctors later in the day to make sure his initial feelings of wellness are accurate.

“That was such a good car,” Dixon, 48, said to media members less than three hours after his accident. “I don’t know if you can explain it unless you do it but I feel invincible in that race car.” His PMI chassis, he said has 60-70 passes on it and “it shouldn’t have done that.”

During his 2010 championship season, Dixon used the same car for the entire campaign and they didn’t replace the front half of the car until it had 150 or so runs on it, Dixon said. “This car was way under those numbers where you need a front-half so we’ll take a long look at it once we get it back to find out what caused it.” Dixon has 62 victories in the prestigious Top Fuel class along with his three titles.

Walked away without serious injury

While “everything did its job” the landing was very hard on the asphalt, he confirmed. “The last time I went through one of those (types of landings) my eyes literally came out of my sockets. The fact that I’m here and talking to you with no broken bones, still have both eyes, that tells you about the improvements in the car in these 15 years since my last time. You learn from all these incidents and try to make things safer.

“Whether we race tomorrow is one thing but the fact that I”m here talking to you says a lot,” Dixon reminded. He was still despondent over the condition of the car: “It drove so nice; it was such a nice car… “

The dragster remains in NHRA impound this afternoon. Dixon’s BVR team will, when they are able to retrieve the dragster, download information from their data recorder so that they can get a better idea of what actually happened during Mr Dixon’s wild ride.