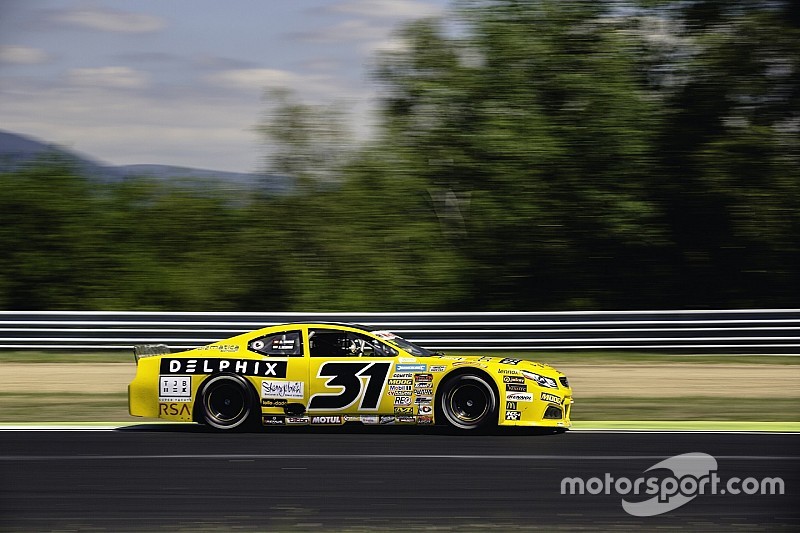 Advait Deodhar put on a masterful recovery drive in the Czech Republic round of NASCAR Euro Series after he was spun around by a rival driver at the start of the race.

Having secured last-minute funding to continue his first season in the Elite 2 category, Deodhar started the second race of the weekend from sixth on the grid.

Heading into the first chicane, Martik Doubek touched the Chevrolet SS of Deodhar, pitching the Indian driver into a spin and facing the wrong direction.

Despite being left stranded in the gravel trap, Deodhar managed to return to the track and initiate arguably the most impressive performance in the entire field.

By half race distance he was running in 13th position and on lap 11 he broke inside the top 10.

On the penultimate lap, Deodhar took advantage of a crash between Michael Bleekemolen and Bean Creanor, taking the inside line to pass both of them in one move.

Moments earlier, he had also managed to navigate his way past Pierluigi Veronesi, who was left directly into the path of the crashing duo and had to take evasive action.

After the triple overtake, Deodhar went on to finish seventh, culminating a last-to-points charge.

Earlier in the weekend Deodhar finished fourth in Race 1, just a few seconds off the podium trio.

Deodhar lined up fifth on the grid and lost a place to Vittorio Ghirelli at the start, looking set to finish a disappointing sixth.

However, a mid-race safety car brought him back to contention, and he made some braves to take full advantage of the opportunity bestowed upon him.

The Indian driver overtook both Ghirelli and Doubek in the opening sequence of corners, although Doubek managed to repass him later to push him back to fifth.

Deodhar then made a second attempt at getting past Doubek, diving down the inside of the Mustang driver on the penultimate corner.

Doubek cut back and tried to retake the position heading into the final corner, but Deodhar held the outside line to seal the move.

Loris Hezemans rebounds from problems to win at Autodrom Most

Roundtable: Who will be the next first-time winner?