Loris Hezemans rebounds from problems to win at Autodrom Most 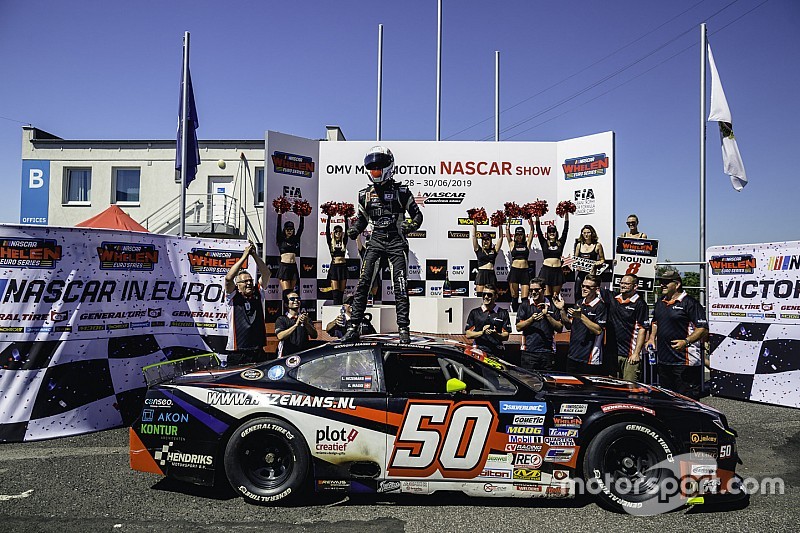 After suffering an engine failure late in the race on Saturday, Loris Hezemans bounced back the best way possible on Sunday.

Hezemans passed Nicolas Rocca in Turn 1 of the first lap and went on to keep Rocca from sweeping the weekend winning the inaugural NASCAR GP Czechia at the Autodrom Most.

Hezemans went on to lead all 17 laps of the race in his first win of the 2019 NASCAR Whelen Euro Series season.

“It’s the best way to come back from the disaster we suffered yesterday,” said Hezemans, who grabbed his second NWES career win 288 days after his maiden win at Hockenheim. “We had a tough first part of the season but we were also there at the front of the pack.

“Sometimes I made mistakes on my own and sometimes we were just in the wrong place at the wrong time. It feels so good to be back in Victory Lane.”

Stienes Longin expanded his championship lead by securing his sixth second place finish the year. The PK Carsport driver once again impressed for his consistency and also took advantage of the setback his teammate Rocca suffered.

While running less than one second behind Hezemans, the Italian went in the gravel on Lap 14 and reported damages to slow his PK Carsport Chevrolet. Rocca salvaged an 11th-place finish under the checkered flag.

Romain Iannetta finished third for his best finish of the season with Thomas Ferrando and Ulysse Delsaux rounding out the top five.

After the two drivers got together on Saturday resulting in a penalty for Alon Day the defending champion and Jacques Villeneuve had another incident in Sunday’s race at Autodrom. Both drivers got tangled in a crash at the start and had to retire from ELITE 1 Round 8.

A nice crowd of 20,750 fans visited the track over the weekend for the first edition of the NASCAR GP Czechia.

Lasse Soerensen started from second and took over the lead from Giorgio Maggi in the first corner of the race. With Sunday’s win, Soerensen climbed up to third in the overall standings and reduced his gap from Maggi to 33 points.

“It was a really tough race, but I had a good start and I was able to overtake Giorgio on the outside of turn 1,” said Soerensen. “It seemed that I was faster in the first one and a half sectors and he was better on the rest of the track. We had an almost identical pace. I think I had him under control, I’m happy for the whole team and my sponsors back home.”

Maggi, who started from the pole, spent the entire race on Soerensen’s rear bumper. After winning the inaugural ELITE 2 race at the Autodrom Most, Maggi ended up second in Round 8 to increase his championship lead to 16 points on Vittorio Ghirelli, who got a one championship point penalty for not giving back one position after a turn 1 shortcut.

“It’s great to expand the championship lead,” said Maggi. “The start was okay, but Lasse was able to overtake me. I tried a few times to make a move in turn 1. He blocked very well, so there was nothing I could do. I tried to force him into a mistake but he was very consistent. In the end I’m happy with the second place. I’m looking forward to Venray as I have some experience there. It’s something new for me and I’m very excited.”

Ghirelli ended up third with Nicholas Risitano fourth. After finishing fourth last weekend in the NASCAR Gander Outdoors Truck Series, Myatt Snider gained six positions on track to close the top-five for the second time since debuting in Euro NASCAR.

The NASCAR Whelen Euro Series will be back in action at Raceway Venray on July 13-14 for the only oval weekend of the 2019 season.