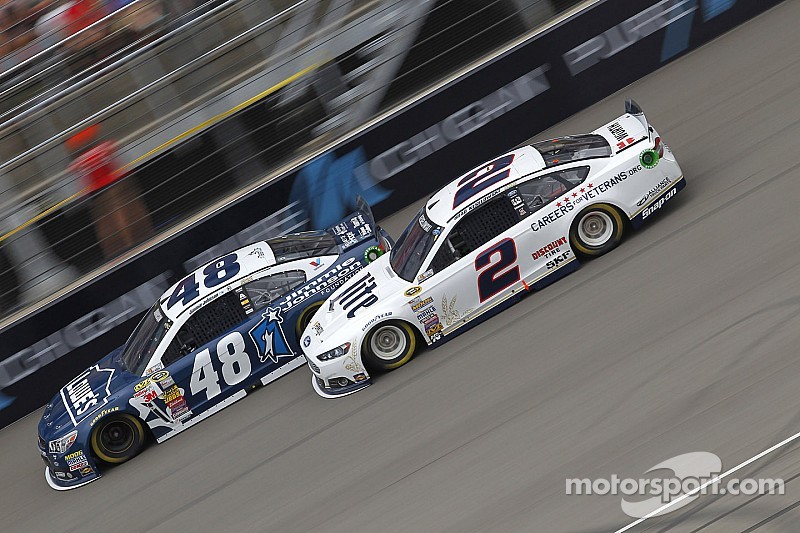 It’s a good thing that Jimmie Johnson receives support from Kobalt Tools. There was no shortage of pliers, vise grips and wire cutters when his shift lever broke at Michigan International Speedway on Sunday.

The team devised a plan, allowed Johnson to take the race lead for eight laps to build a buffer and then chose an opportune time to pit. Although it took multiple stops to correct the issue, over the next 110 laps the cautions fell in his favor and Johnson battled his way back to a top 10 finish.

That’s what it takes to win championships.

The top teams in NASCAR always persevere. Over the course of Johnson’s tenure with the No. 48 Hendrick Motorsports team, it’s happened time and again. Just when it appears that Johnson is kaput, he comes back.

Given NASCAR’s new point structure where a driver in the top 30 in the point standings with a win leapfrogs over a driver sans victory but higher in the points, there have been times when the 48 team has nothing to gain by making laps in a damaged car.

But if Johnson has the opportunity to remain in the game and post a top five or top 10 finish, he’s going to soldier on even if the results are far from satisfactory.

“Yeah, we still had these obstacles,” Johnson said. “That’s the thing we’ve got to figure out within the next few weeks. The clock is ticking and we’re running out of time on that front.

"But we have fast race cars and they keep saying we show it during the race, but the results haven’t been there. This was a good recovery for today, but it’s certainly not we want to be.”

Brad Keselowski started fifth and was running in the top 10 when he slapped the wall in Turn 1 on Lap 168. With his spotter Joey Meier carefully monitoring the competition, the team skillfully repaired the No. 2 Ford under the direction of Paul Wolfe. Although Keselowski restarted 17th with 29 laps remaining in the race, he was able to regain his top 10 position at the finish.

“That was a good finish to come home eighth after hitting the wall,” Keselowski said. “We had some pretty good adversity there with the blown tire. I am not sure why that happened. We didn’t have any indication of it and there was no real reason to. I was about the least aggressive you could be and did a run before that where I was more aggressive and didn’t even come close to showing signs of an issue. I don’t know. I think we just got a bad tire.

“It is hard to say but the team did a hell of a job to overcome that and get an eighth place finish out of what should have been probably a 25th or 30th place finish.”

The team did a hell of a job to overcome that and get an eighth place finish out of what should have been probably a 25th or 30th place finish.

Certainly, the Hendrick Motorsports-powered cars have an advantage over the field. Just ask Denny Hamlin and Ryan Newman, both who protested loudly after the race. Hamlin claims that Hendrick has a 50 horsepower advantage over the Toyota engines. Newman told Johnson is he had his motor, he wouldn't have been in the No. 48 car's way.

And while Team Penske’s power plants might not be nearly as stout as HMS, the front end geometry of the Nos. 2 and 22 enable Keselowski and Joey Logano’s Fords to breeze around the tracks where other crews have struggled.

Yes, both organizations have exceptional equipment. That was clear particularly on a high speed flat track such as Michigan. The Hendrick engines, whether it was winner Jeff Gordon or second-place finisher Kevin Harvick, blew by the Richard Childress Racing Chevys. The Team Penske Fords put Roush Fenway Racing Fusions to shame.

If all things are equal and the same resources are available from the manufacturers to these top teams, the defining distinction is the caliber of personnel.

And once the Chase to the Sprint Cup begins, sure the best cars will be out front but at the finish people will make the difference.

Tough weekend on and off the track for Martin Truex, Jr.