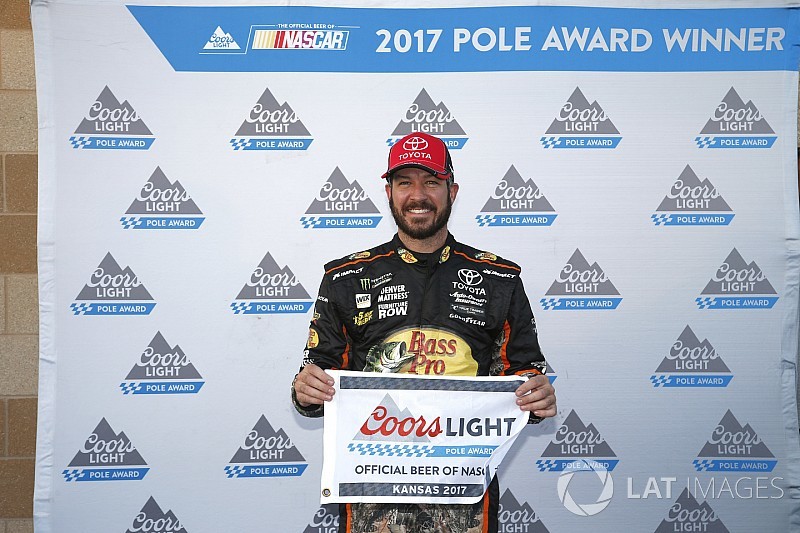 For Martin Truex Jr., it was a win-win on Friday at Kansas Speedway.

Not only did Truex collect his 15th career Cup pole, his second at the track and his third pole of 2017, but he also earned the first pit stall selection for next weekend’s race at Martinsville Speedway for finishing first in qualifying.

“We knew this was a big one tonight with next week’s pit selection,” Truex said. “Cole (Pearn, crew chief) made the right adjustments and we were able to go after it.

“This stuff is so difficult These teams work so hard. If you’re not going forward, you’re going backwards. Great job by my team.”

Blaney left his stall first but moved aside and allowed Denny Hamlin and Matt Kenseth to attempt qualifying runs. Kenseth topped Hamlin (187.461mph) with a lap of 187.604mph. Kevin Harvick (187.682mph) and Kyle Busch (186.329mph) were next with just over two minutes to go.

With a minute remaining, Blaney was second behind Harvick, but Truex’s lap of 188.029mph earned the top spot.

NASCAR called time had expired as Keselowski and Dillon completed their laps.

Larson, who had dropped to 13th, made a second attempt with 90-seconds on the board but did not advance. Kurt Busch ran a second lap but didn’t improve. On Jimmie Johnson’s first attempt, he could only muster the 13th-fastest lap — 185.957mph. He knocked Larson to 14th.

“We dodged a bullet,” said McMurray, who was the last driver to transfer.

Elliott qualified 15th — the fourth driver bumped from the final round.

The Stewart-Haas Racing Fords of Kurt Busch and Danica Patrick claimed the top two positions in the first round of time trials of Sunday’s Hollywood Casino 400.

At the six-minute mark, Kurt Busch shot to the top of the speed chart with a lap of 186.335mph. Suarez completed his first lap with five minutes to go. He was 10th-quick (185.242mph). Ryan Newman dropped to 11th followed by Bowyer, Johnson, Elliott, McDowell, Larson, Kahne, Buescher, Kyle Busch, Paul Menard, Austin Dillon, Aric Almirola and Ricky Stenhouse Jr., rounded out the top 24.

Danica Patrick vaulted to second (186.303mph) on the board with four minutes remaining on the clock.  With one minute to go, Logano, Kahne, Kyle Busch, Ty Dillon, Austin Dillon, Stenhouse and Keselowski made second attempts.

“That’s all she’s got in it,” Stenhouse said after moving from 26th to 25th but failing to advance to Round 2. Stenhouse was the only playoff driver not in the top 24.

Watch Truex talk about winning the pole at Kansas: