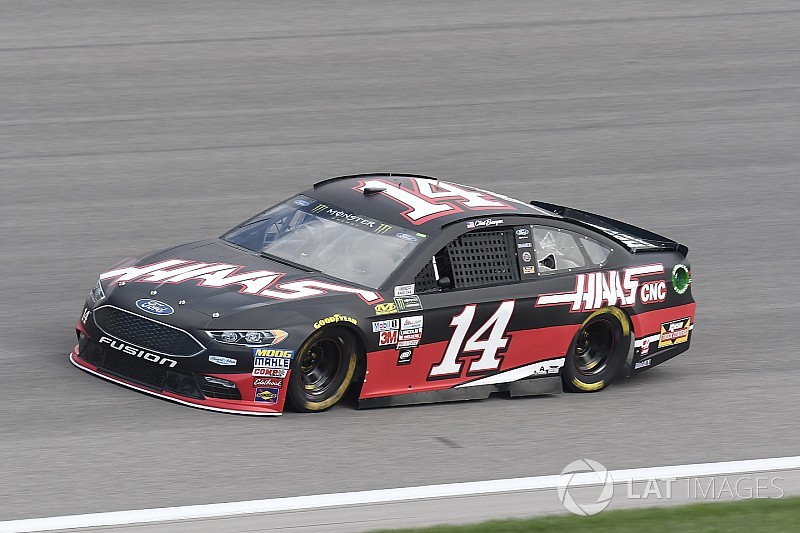 Joining Stewart-Haas Racing and taking over for team co-owner Tony Stewart in the No. 14 car should have been the opportunity of a lifetime.

That’s the thing about Stewart-Haas; there’s no quit

But Bowyer — unlike his SHR teammates Kevin Harvick and Kurt Busch — has yet to win in the first 31 races of the season. He failed to qualify for the playoffs and hasn’t posted a top-five finish since Watkins Glen on August 6.

Certainly, it was understandable when frustration got the best of Bowyer at Talladega Superspeedway last weekend. After all, Bowyer had a wicked-fast car. He qualified seventh, finished fifth in the first stage and third in the second stage. Although Talladega ranks at the top of death-defying tracks for Bowyer, he’s also won there twice.

“The one common denominator is I knew and I felt strongly that a Ford was going to win that race. In the back of my mind, there’s a handful of tracks that I feel we can be competitive, win at and beat these Toyotas right now. That was one of them. Just a lot of things going on and confusion was one of them, that’s for damn sure.”

Bowyer was prophetic. Brad Keselowski’s Ford won. Following a less than stellar pit stop in the final stage, Bowyer fell to the rear of the field. He was collected in a wreck involving Cole Whitt and AJ Allmendinger and finished 35th.

Drama within the No. 14 team

“How did we end up in the back,” Bowyer asked his crew chief Mike Bugarewicz over the radio.

Bugarewicz replied, “We’ve tore up a lot of other (stuff) throughout the year, too, bud.”

“Well, these guys don’t want to hear it either,” Bugarewicz replied.

Bowyer wasn’t finished. He parked his car in the pit box, had words with Bugarewicz and walked out without knowing whether his was drivable — or not.

On Friday at Kansas Speedway, Bowyer insisted his car was not viable.

“That’s why we came to the pits and took a look at it,” Bowyer said. “Somebody drove around the track at the beginning of the race and oiled the track down and I think NASCAR made them wait until the race was over four hours later, or whenever the hell he got done with it. I was in Kansas unloading my family. That sucked.

“Unfortunately, the rules that you’re in, it sucks. It didn’t seem like anybody could continue at Talladega last week. It’s just a frustrating race. It’s extremely nerve wracking. To be dead honest with you, when I’m at home there are only two tracks that I’m scared of. There is only track in the back of my mind that I could lose my life and those are the only two. When things get out of control you have to remember that. Were still out there risking our lives. There’s a lot at stake.”

With Bowyer returning to his home track — Kansas Speedway — this weekend, he’d hoped to put Talladega in his rearview mirror. On Tuesday and Wednesday, his SHR teammate Kurt Busch filled in at Charlotte Motor Speedway for the tire test on the Roval while Bowyer fulfilled a sponsor commitment in New Mexico. He’s taking Busch’s place for the Homestead-Miami test next week. Bowyer made a point of shifting the focus from the No. 14 crew's issues to the SHR team effort for Kevin Harvick’s title run.

“That’s the thing about Stewart-Haas; there’s no quit,” Bowyer said. “It’s a collaborative effort with everybody and all the race teams until we don’t have a car in the hunt that effort is not going to stop.”

Bowyer certainly didn’t “quit” on Friday. After posting the eighth-quick single-lap speed in practice, he advanced to the final round of time trials and qualified 10th.

Still, after running 18th in the standings, leading 22 laps, scoring five top fives and 12 top 10s, might it be time to consider a new crew chief for Bowyer? With Danica Patrick parting ways with SHR at the end of the year, Billy Scott will be available. Scott was Bowyer's crew chief at the end of 2015 prior to Michael Waltrip Racing imploding.

“I don’t know,” he said. “It’s not time...it’s time to start thinking about that. At the end of the day, it’s about depth in our organization and building and organization. We just talked about teammates and things.

"Who knows? There could be a lot of different things that happen in the off-season for Stewart-Haas. You don’t know that. I don’t know that or anybody else. Time will tell and paint a lot clearer picture.”

If Johnson is feeling the playoff pressure, it doesn't show