NASCAR Roundtable: With Talladega ahead, who is in playoff danger? 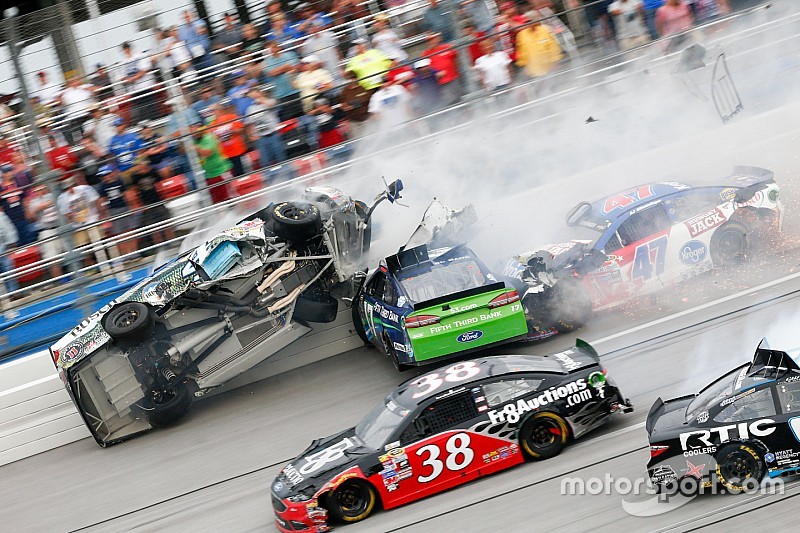 On this week's edition of the NASCAR Roundtable, we take on the recent rules changes announced by the series, as well as Chase Elliott's return to the prominence and how Talladega will affect the playoffs.

1. The 2019 rules adjustments for the NASCAR Cup Series were announced last week. Although it's too early to examine every rule change and what it means for the on-track product, how big is this decision, which includes the elimination of restrictor plates?

Jim Utter: There have been restrictor-plates used at Daytona and Talladega since before I started covering racing - over 20 years. I've known nothing else on superspeedways and I would gather many of today's fans haven't either. I think in terms of relevance to what manufacturers produce on car lots, getting rid of the plates are a good thing. They are much like a holdover from the carburetor days. Hopefully, the use of tapered spacers may allow some better throttle response in the Cup series races and give individual drivers a little more control over their destiny at those races.

Nick DeGroot: I think moving from restrictor plates to tapered spacers is a good move. As for the the package in general, I do believe we will see an improved show, I just hope it doesn't take away from the racing. Maybe it's just the racing purist in me, but I am concerned about the idea of pseudo-pack races where it's likely to be mostly full throttle and a pack of cars. It will be exciting, but I'd be lying if I said I didn't have any apprehension about it.

Tim Southers: I think this is a step in the right direction as far as technology is concerned as the restrictor plate was used with carburetors. The tapered spacer could be the fix that hopefully makes fans and competitors happy.

2. Talladega Superspeedway always provides excitement and drama and this weekend's race will probably be no different. Who do you feel has the most pressure on them this weekend to win or get a strong finish?

Jim: Anybody in the bottom four of the current Cup playoff standings could use a really good performance this weekend, but I think Kyle Larson may be in the biggest trouble. After being fast in both pre-race practices at Dover, Larson was completely out to lunch in Sunday's race to just about everyone's surprise. If he is going to have a shot to keep racing for a title, he is definitely going to need a top-five finish - and perhaps a win - to remain in the championship picture.

Nick: Look at the bottom of the playoff standings for your answer -- Alex Bowman, Kyle Larson, Clint Bowyer and Aric Almirola. They definitely have the most pressure to perform while those ahead of them are likely taking the safer, just survive route.

Tim: I think Kyle Larson and Alex Bowman will need to have a great run - if not a win - this weekend at Talladega. I’m honestly surprised that Larson has yet to win a race and if he can find a way to finish the weekend strong he could still win multiple races this year but he needs to get it done soon. Bowman could also continue a tradition of Talladega Superspeedway providing a Cup driver their first series win.

3. The NASCAR Trucks return to action this weekend and it's a cutoff race for the series. Who are the two drivers you predict will not advance at Saturday's race?

Jim: I'm going to go with Stewart Friesen - who is currently 12th in the standings - and Matt Crafton. Even though Crafton is above the cutoff line at the moment, he does not have a good track record at either Daytona or Talladega. In 12 Talladega starts, he has just four top-10 finishes, including just one in the last four races.

Nick: Talladega is always a wildcard, but I think the two drivers on the hot seat (Stewart Friesen and Ben Rhodes) will ultimately be the two drivers eliminated. Both could win the race, but if they don't, I think they'll be out.

Tim: Although he has the experience to pull out a win, based on their performance this season, I feel Matt Crafton will probably not advance and I think his teammate Ben Rhodes might join him falling out of the playoff race. I just don’t think they will have the speed to contend for the win - which both of them really need to secure a playoff berth into the next round.

4. After winning his second race of the season and now earning a pass to the Round of 8 in the Cup playoffs, do you think Chase Elliott has a chance to make the Championship 4?

Jim: Elliott's second win of the season couldn't have come at a better time for him. Getting a pass into the Round of 8 allows him to spend two races trying to improve his points total (including playoff points) and the Round of 8 begins at Martinsville, where Elliott ran extremely well one year ago and came just laps short of getting into the Championship 4. Outside of the Big 3 of Kevin Harvick, Kyle Busch and Martin Truex Jr., I can't think of anyone in the Cup series in a more enviable position that Elliott right now.

Nick: With Martinsville and Phoenix in the next round, definitely. It's going to be a tough group to break into with the 'Big 3' drivers all vying for spots, as well as the likes of Brad Keselowski and possibly Kyle Larson (if he can't escape elimination this round).

Tim: The second win of the season for Elliott couldn’t have come at a better time for Elliott. His timely win at Dover allows him to focus on improving his car and preparing for the next round and the three tracks that will be competed on before the final four is determined. Elliott could also keep his momentum going at Martinsville where he’s ran extremely well before.