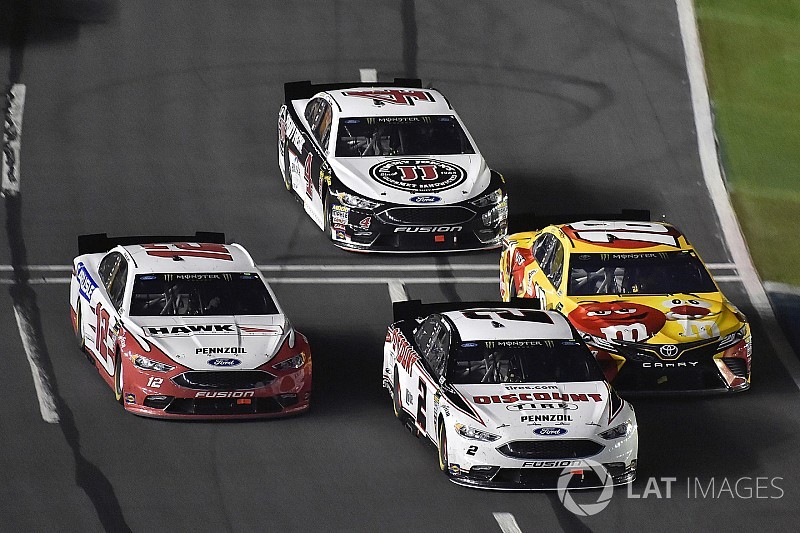 The All-Star Race aero package resulted in 38 green-flag passes for the lead, compared to zero during the 2017 event.

The package, which consisted of front air ducts, larger rear spoilers and restrictor-plates, was well-received. The leader was never able to get too far away and the majority of the field was bunched together which created non-stop action throughout the field.

"I hate to admit it but the package was kind of fun, at times anyways," said Kyle Larson. "I'd hate to go this slow every week, but I think for select tracks, it was pretty good. Here at Charlotte it was fun. Not sure what other tracks it would be good at right now, but from my seat it was a good time."

Denny Hamlin described the racing produced as a sort of hybrid between your usual speedway racing and the pack racing one would expect to see at a superspeedway such as Daytona and Talladega.

“I thought it was more similar to a normal open race – mile-and-a-half, but you had to be smart like you would at a superspeedway," explained Hamlin. "It was a mix of the both and obviously I thought it was a great show and I thought the racing was fun to watch and be a part of. We’ll see where it takes us in the future.”

But like Larson, Hamlin says the package isn't a panacea to improve the racing everywhere. It won't work at all tracks.

“I think every track has a different characteristics and different things that can work for it. Obviously you don’t want to put restrictor plates on anything that we already – a mile or less – that would just really kill the racing. I think there could be a fight there with the car owners wanting to have simpler rules for all the race tracks. It’s tough to say, obviously we want the best race for the fans and that’s the most important thing. Whatever they want us to do, we’ll do.”

The package was used during the 2017 NASCAR Xfinity Series race at the Brickyard where it was considered a success. It will again be utilized later this year in June at Pocono Raceway and Michigan International Speedway.

Race-winner Kevin Harvick said of the package: “A lot of pushing and shoving. It reminded me a lot of IROC (International Race of Champions) racing back in the day. We will see what everybody thinks and go from there.”

Chase Elliott took a more measured approach to the package, highlighting both the pros and cons. “Yeah, I actually had some fun really. It was different for sure, but it wasn’t all bad, I don’t guess. Obviously, there was way more potential to crash and what not, which is I guess good and bad depending upon who you are. If you are sitting at home and watching it was probably fun because we are all close.

"If we see this package more, I’m sure you will see some more torn up cars too. And I’m sure the teams will get better at building and preparing for it too, but proud of our night. To be able to come from last to fifth and I get the fan vote and end up coming home with a top five wasn’t all bad.”

The race featured five cautions for incidents, including an eight-car pileup towards the end of the third stage.

Bowman "frustrated" by other drivers taking advantage of him