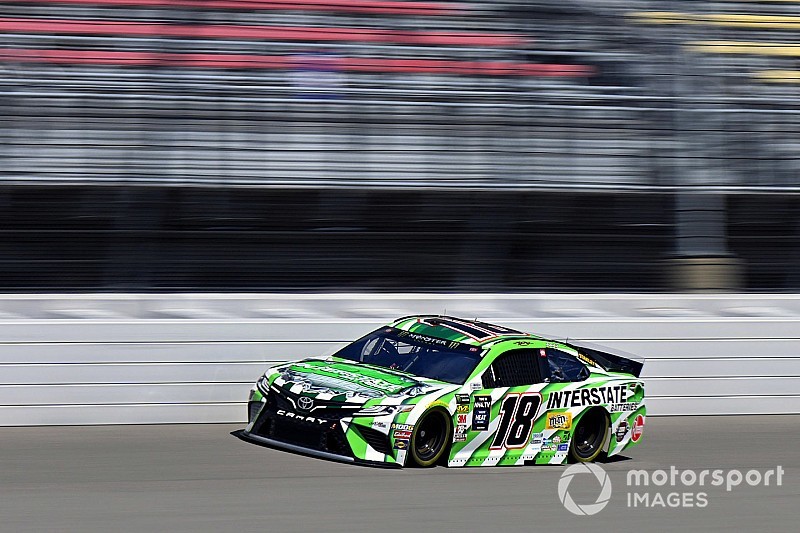 Kyle Busch passed teammate Martin Truex Jr. for the lead in a one-lap shootout and held on for the Stage 2 win.

Truex led on a restart with one of 60 laps remaining in the second stage at Michigan International Speedway but Kyle Busch powered past him off Turn 2 to grab the lead.

Busch held off Truex for the stage win as the cars of Aric Almirola, Austin Dillon and Daniel Hemric got caught up in a wreck behind them.

Following the break between Stages 1 and 2, all of the lead-lap cars elected to pit with Brad Keselowski the first off pit road with a two-tire pit stop.

When the race returned to green on Lap 67, Keselowski was followed by Denny Hamlin, Alex Bowman, William Byron and Kyle Busch.

After 70 laps, Keselowski remained in the lead but Hamlin was closing as Truex moved into the third position after getting around Bowman.

With 40 laps remaining in the second stage, Keselowski continued to try to fend off a challenge for the lead from Truex. Hamlin ran third, Kurt Busch fourth and Bowman fifth.

At one point, Truex got up alongside Keselowski for the lead only to get held up by a lapped car, which allowed Hamlin to go to the outside of Truex and claim the second spot.

With 34 to go in the stage, Truex worked his way back around Hamlin into the second spot as Kurt Busch ran fourth.

Truex caught Keselowski again on Lap 91 and was able to clear him for the lead racing the bottom groove.

Hamlin powered into the second position on Lap 92, as Keselowski dropped to third. One later lap later, Kurt Busch passed Keselowski, dropping to him to fourth.

A round of green-flag pit stops began with about 15 laps to go as teams need fuel to make it to the finish of Stage 2.

Once the cycle of stops was completed on Lap 113, Truex cycled back into the lead thank to a fuel-only pit stop. Kyle Busch ran second, Hamlin third, Jones fourth and Bowman fifth.

On Lap 116, Keselowski appeared to suffer a flat tire and spun off Turn 4 and into the infield grass to bring out a caution. “Lost the right-rear entering (Turn) 3,” he said over his team radio.

Several team elected to pit under the caution but Truex elected to remain on the track and still held the lead when the race restarted with one lap remaining in the stage.

Truex takes Stage 1 win at Michigan after duel with Hamlin