Chad Johnston will guide Kyle Larson and the No. 42 Target Chevrolet at Chip Ganassi Racing, sources have told Motorsport.com. 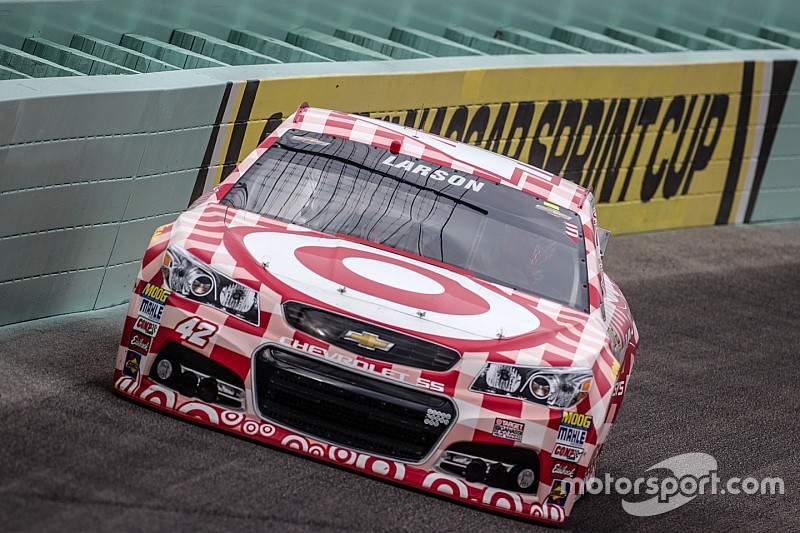 Johnston, who replaces Chris Heroy, led Tony Stewart and the No. 14 Stewart-Haas Racing team for the past two seasons. Motorsport.com has also learned the name of his replacement atop the No. 14 pit box (Read Here).

Prior to SHR, Johnston, 35, guided Martin Truex Jr. at Michael Waltrip Racing. He was displaced when MWR lost the NAPA sponsorship following the 2013 season.

“I am very excited for the opportunity to be joining Chip Ganassi Racing with Felix Sabates, and the opportunity to work with Kyle Larson," Johnston said. "The organization has a great reputation in numerous forms of racing, and I’m looking forward to adding to that reputation in NASCAR. Kyle is certainly a unique talent, and I’m eager to get to work with him and the team as we look to build a foundation of success.”

The second-generation racer graduated from Indiana State with a degree in mechanical engineering. Johnston started his career in the aerospace industry before his passion for racing carried him to the Camping World Truck Series in 2004. After a short stint at Evernham Motorsports he joined MWR in 2009 and became Pat Tryson’s engineer the following season.

Johnston was promoted to crew chief for the 2011 June Pocono race. In his first full season with Truex and the No. 56 team qualified for the Chase. The following year, Johnston guided the team back to Victory Lane with the win at Sonoma — Truex’s second career victory.

Johnston replaced Steve Addington at SHR. But the last two seasons Stewart has struggled to get up to speed — and has graciously exonerated Johnston during his tenure. The three-time champion, who was 28th in the point standings entering the weekend, said during the Sprint Cup contender’s Media Day last Thursday change would be coming.

“The hard part is when you get back where we're at right now, it's hard to sit there and say exactly what you need, because if it was that easy, you'd have fixed it by now, which makes it even more difficult to sit here and to be honest and tell you what we know needs to be changed.  That's the hard part is trying to find those variables that we need to work through to get better next year.”

Larson finished 19th in the 2015 Sprint Cup point standings. He earned his second top-five finish of the season Sunday night at Homestead-Miami Speedway. In his first season on the tour, Larson finished 17th in the standings with eight top fives and 17 top-10 finishes.

We fully expect the combination of Chad and Kyle to be the foundation of the No. 42 team for years to come.

“We are very much looking forward to having Chad join the No. 42 team, and excited for the fresh perspective that he brings," team owner Chip Ganassi said. "We fully expect the combination of Chad and Kyle to be the foundation of the No. 42 team for years to come.

"Chad is a race-winning crew chief and has helped steer a team into The Chase, two goals we have each season for our teams. I think his background and experience with veteran drivers will help as we look to continue to build on Kyle and the team’s success in the Sprint Cup Series."

Green-flag passes, crazy restarts, the No. 5 back in Victory Lane at Las Vegas

The No. 5 is back in Victory Lane: Kyle Larson wins at Las Vegas

Larson after winning at Vegas: ‘That was some fun racing’