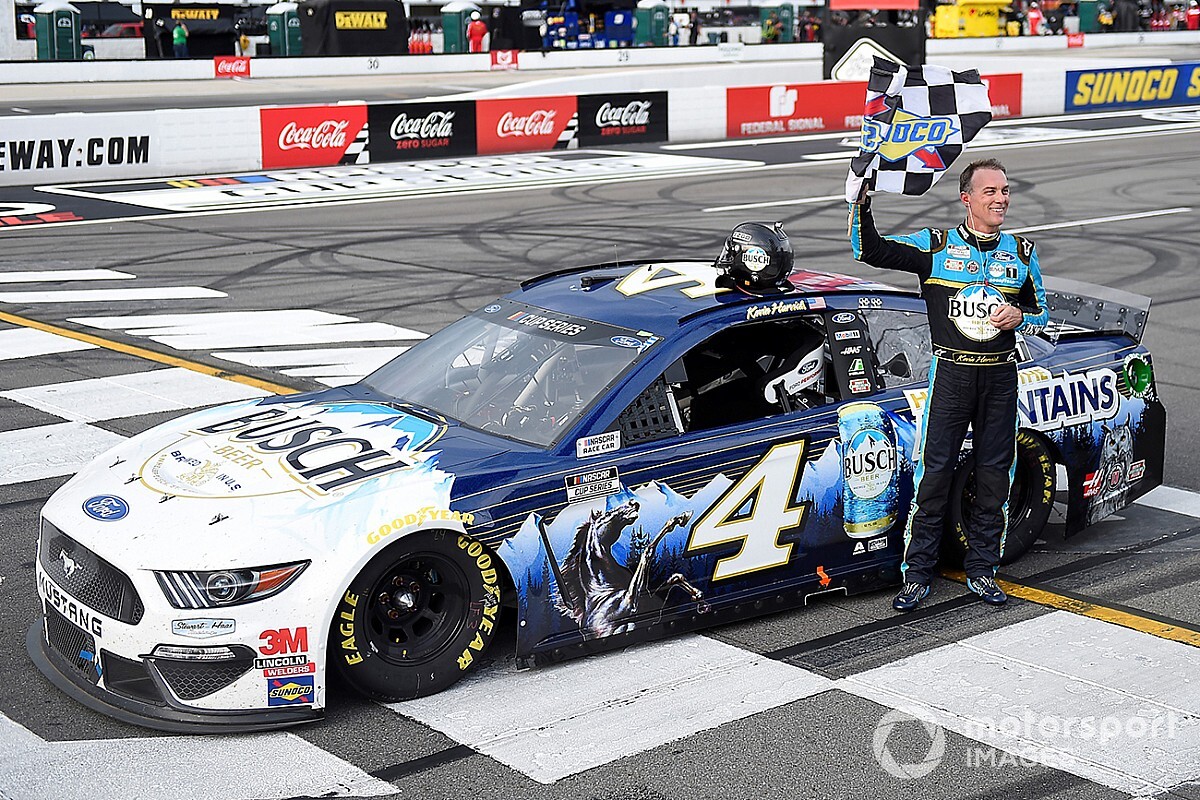 Kevin Harvick snapped a 0-for-38 winless streak at Pocono Raceway and picked up his third NASCAR Cup Series victory since the sport returned to competition on May 17.

Harvick cycled through a late-race run of green flag pit stops to emerge the leader and then held off a determined challenge from Denny Hamlin to win Saturday’s 325-mile race at Pocono – part of the track’s unique doubleheader weekend.

The victory is Harvick’s third this season – all coming in the last 10 races – and 52nd of his career.

"I got to thank everybody on our team. We weren't where we needed to be to start the race and lost a bunch of track position," Harvick said. "We came back and made some great strategy calls and were able to get out front and make some good laps. It's great to finally check Pocono off the list.

"Stewart-Haas Racing has done such a great job with all of our cars every time we've come here over the last seven years. I wanted to say to my family - I know Keelan (his son) raced all day; DeLana and Piper. Just glad it didn't rain all day."

Asked about the opportunity to earn back-to-back wins with Sunday's doubleheader, Harvick said, "We'll we were back as far as 20th today so in the end I think it will come down to strategy and what you need to do. I wish I could explain how hard everybody is working at the shop with this schedule and everybody broken up. Thank you to all the fans - I wish you were here. This isn't near as exciting. I feel like my 7-year-old - I've got all this pent up energy and I'll just share it with nobody."

Because of an invert, he will start Sunday’s 350-mile race at Pocono from the 20th position. Ryan Preece, who finished 20th, will start on the pole.

Following the break between Stages 2 and 3, only a handful of lead-lap cars elected to pit and Almirola led the way on the restart on Lap 83.

Chase Elliott had an uncontrolled tire penalty assessed during his pit stop and had to restart from the rear of the field. He restarted in the 27th position.

On Lap 90, the first round of drivers hit pit road to make their final green-flag stop for enough fuel to make it to the finish.

The strategies were varied on pit road with several drivers taking fuel-only (about 4 to 5 seconds worth) and some with two new tires. Very few appeared willing to make a 4-tire stop.

With 25 laps remaining, seven cars had still to make a final pit stop, including the race leader, Newman. With 20 laps to go, McDowell got around Ryan Newman to take the lead as the top six drivers still had yet to pit.

Once the cycle of stops was completed on Lap 114, Harvick emerged as the leader ahead of Almirola and Truex.

With 15 laps to go in the race, Harvick had a more than 2-second lead over Hamlin. Almirola was third, Truex fourth and Bell rounded out the top-five.

After 315 laps, Harvick’s lead over Hamlin had dipped below one second as Almirola ran third.

With seven laps remaining, Joey Logano was forced to pit under green with a flat tire.

Almirola held off a fast-approaching Logano on a two-lap restart to take the Stage 2 win.

Truex was third, Ryan Blaney fourth and DiBenedetto rounded out the top-five.

Following the break between Stages 1 and 2, many drivers pit but Logano stayed out and remained in the lead.

Tyler Reddick was penalized for speeding on pit road and had to restart the race from the rear of the field.

On the restart on Lap 31, Logano was followed by Almirola, Blaney and Elliott.

Almirola got around Logano through the inside of Turn 1 to reclaim the lead shortly after the restart.

On Lap 38, Blaney made his first pit stop of the race under green. Kurt Busch followed on Lap 40. Logano, Bowman, DiBenedetto, Elliott and Almirola all followed in the next several laps.

That opened the door for Truex to move into the lead on Lap 46.

With 25 laps remaining in the second stage, Truex and teammates Hamlin and Kyle Busch claimed the top three positions while Byron moved up to fourth.

After working him over several laps, Hamlin finally got around Truex on Lap 60 as several drivers, who had stayed out during the Stage 1 break began pitting under green for fuel to make it to the finish of the second stage.

With 15 laps remaining in the stage, Hamlin was followed by Kyle Busch and Erik Jones.

On Lap 65, NASCAR threw the caution for a large piece of debris on the frontstretch. It appeared to be the remains of a tire from the car of J.J. Yeley.

Most of the lead-lap cars elected to pit with Almirola the first off pit road. The race returned to green on Lap 70 and Almirola was followed by Logano and Blaney.

Reddick and Jones got together off Turn 3 on the restart lap and both slammed into the inside retaining wall to bring the caution back out.

During the caution, Ricky Stenhouse Jr. drove down pit road the wrong way as he attempted to reach his pit stall just as several cars entering pit road to pit. Stenhouse quickly pulled into a garage opening.

On the restart on Lap 76, Almirola was followed by Logano, Blaney and Truex.

Logano held off a pair of Ford drivers to pick up the Stage 1 win, his fourth stage victory of the 2020 season.

Almirola, who started on the pole thanks to a random draw, led the first 12 laps until NASCAR displayed a competition caution to allow teams to check tire wear.

Several cars elected to pit under the caution but Almirola remained on the track and in the lead when the race returned to green on Lap 17. He was followed by Logano, Blaney and Kyle Busch.

Shortly after the restart, Quin Houff spun off Turn 2 to bring the caution back out. Almirola remained in the lead when the race returned to green on Lap 21.

Logano got around Almirola off Turn 1 and grabbed the lead for the first time in the race.

On Lap 22, Harvick, Stenhouse, Bell and Hamlin all pit under green.

Josh Bilicki (unapproved adjustments) and Brennan Poole (failing inspection twice) both had to start the race from the rear of the field.

What time and channel is Saturday's Pocono NASCAR race?

Hamlin: "We have a race-winning-car" despite runner-up finish