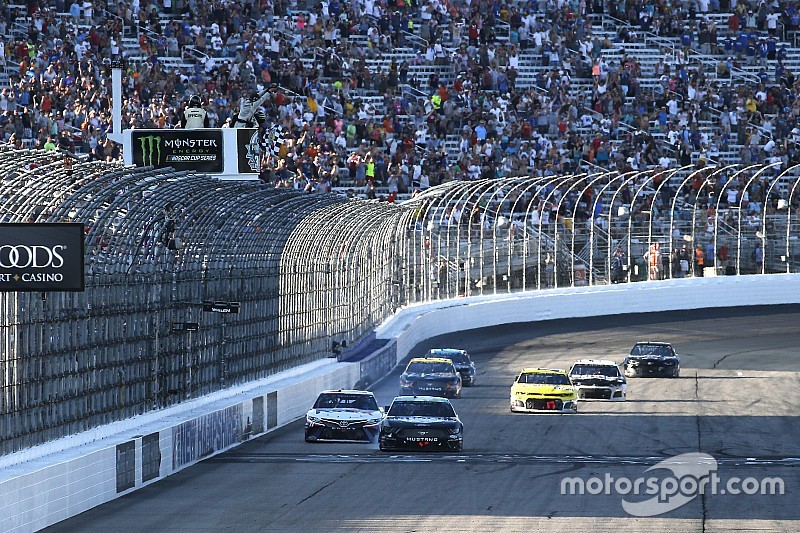 Denny Hamlin did everything short of wrecking Kevin Harvick on the final lap of the Foxwoods Casino 301 Sunday in the Monster Energy NASCAR Cup Series race but came up short in a hard-fought battle for the win.

Hamlin appeared to have a strong car, fully in control of the race when Kyle Larson brought out the final caution of the race to set up a sprint to the finish.

Harvick’s crew chief Rodney Childers made the call to stay out while Hamlin and many others decided to pit for fresh rubber. Harvick was able to hold back a charging Hamlin until the white flag.

“I kind of shoved him up a little higher and got him out of the groove,” said Hamlin of the last-lap duel. “I wanted to just tap him there I didn’t want to completely screw him and wanted to give him a fair shot.

After Hamlin bumped Harvick, the 2014 NASCAR Cup Series champion was able to hold position down the backstretch.

“I at least wanted to give him a fair shot there. Down the backstretch, I kind of let off, and I'm like, all right, well, I'll just pass him on the outside and kind of do this thing the right way, and once I had that big run, he just turned right.  But I would do the same thing.”

Despite the loss, it was an impressive rebound for the Joe Gibbs Racing driver after a practice crash on Friday.

“(The race) was fun,” Hamlin said. “We had a fast FedEx Express Camry today. Really happy about our performance and how we've been for the last few months, and (Crew Chief) Chris (Gabehart) has done a great job with this backup car. This is nowhere near the car that I wrecked on Friday.