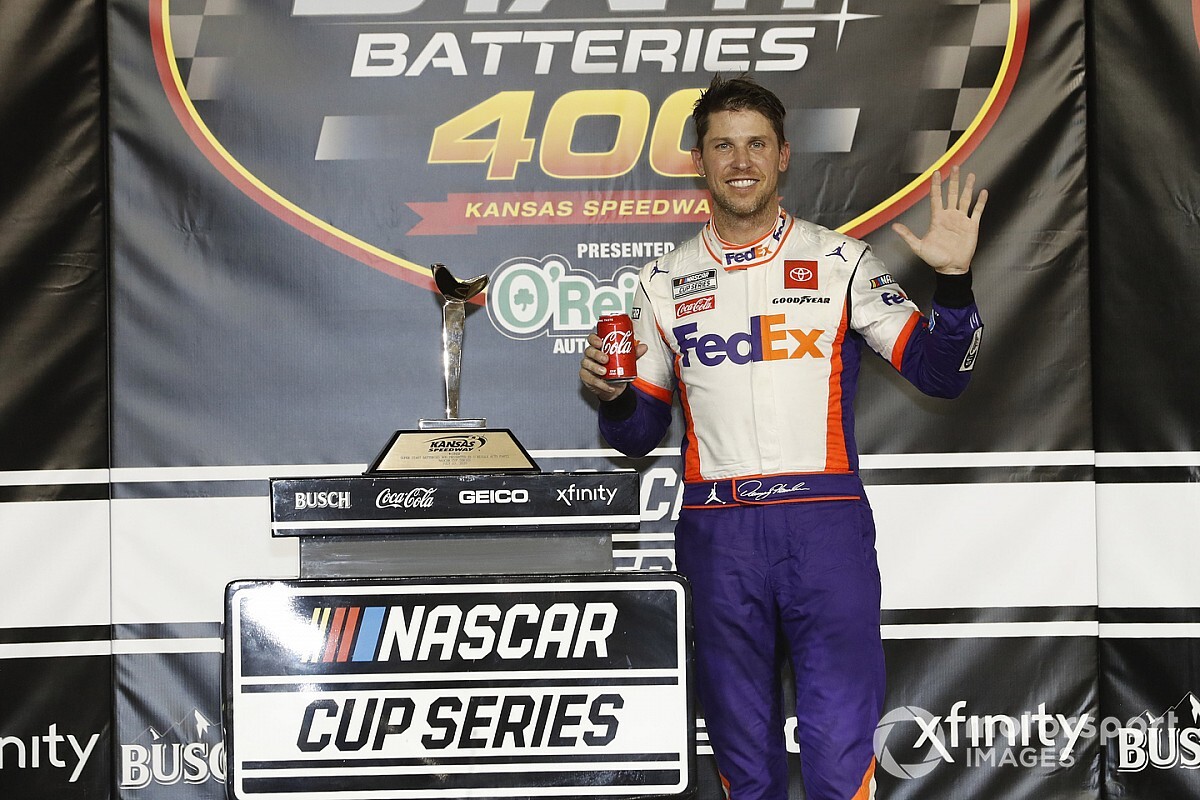 Denny Hamlin grabbed the lead with 13 of 267 laps remaining and held on for his second consecutive win at Kansas Speedway.

Hamlin ended a streak of three sub-par finishes by passing Kevin Harvick for the lead with 13 laps to go and held off a furious challenge from Brad Keselowski to win Thursday night’s Cup Series race at Kansas.

“This race team is such a dream,” Hamlin said over his team radio as he crossed the finish line.

The win is Hamlin’s fifth of the 2020 season – the most of any driver – and his second consecutive at Kansas. It’s also the 42nd of his career.

“I don’t know if we had the best car, we had a top-3 car, just went and got it there at the end,” Hamlin said. “I saw (Harvick) get loose, and when you’re loose, you can’t run up high and we had the momentum up there. This team’s really hit its stride.

“We can win any given week and that’s something that’s really hard to come by. This team’s good at short tracks, superspeedways and intermediates.”

Following the break between Stages 2 and 3, the lead-lap cars all pit with Hamlin the first off pit road thanks to a two-tire stop.

On the restart on Lap 167, Hamlin was followed by Chase Elliott (who also took two tires), Ryan Blaney, Keselowski and Kyle Busch.

Matt Kenseth and Bubba Wallace wrecked in Turn 4 on Lap 171 to bring out another caution. Several cars pit but Hamlin remained on the track and in the lead when the race returned to green on Lap 176. He was followed by Elliott and Keselowski.

On the restart, Joey Logano quickly got off the gas – apparently with a flat tire – on the backstretch and drifted back and into Harvick, which triggered a multi-car accident that also collected Matt DiBenedetto, Jimmie Johnson, Clint Bowyer, Byron and Austin Dillon.

On the restart on Lap 182, Elliott led the way followed by Hamlin, and Blaney. Hamlin quickly powered to the lead but another wreck through the race back under yellow.

Christopher Bell appeared to cut in front of Ryan Newman which triggered the incident and send Ryan Preece’s No. 37 hard into the infield wall, with the impact lifting his car into the air and turning on its side before landing upright.

NASCAR immediately put the race under a brief red flag to clear the track of debris. On the restart on Lap 187, Hamlin led the way followed by Truex and Blaney.

On Lap 193, Truex got around Hamlin to retake the lead.

Newman spun on the track in Turn 3 and again on pit road while a flat tire to bring out a caution on Lap 195. Most lead-lap cars elected to pit with Hamlin the first off pit road.

Byron remained on the track and led the way on the restart on Lap 200, followed by Hamlin, Blaney, Kenseth and Tyler Reddick.

On Lap 207, Keselowski ran down Byron and went to the inside to grab the race lead.

With 50 laps to go in the race, Keselowski remained out front but with only a small lead over Byron. They were followed by Kyle Busch, Hamlin and Bowman.

With 46 laps remaining, Byron got back around Keselowski to retake the lead.

Both Kyle Busch and Ryan Blaney were forced to pit under green with 40 laps to go – Busch after hitting the wall and Blaney for a flat tire.

Corey LaJoie spun with a flat right-rear tire on Lap 235 to bring out a caution. The lead-lap cars all pit with Byron the first off pit road thanks to a two-tire pit stop.

After a side-by-side battle with Byron, Bowman emerged as the leader on Lap 241 while Harvick began battling Byron for second-place.

John Hunter Nemechek got loose on the backstretch and wrecked on Lap 241 which brought out the 11th caution of the race. The race returned to green on Lap 246 with Bowman out front followed by Byron and Harvick.

With 21 laps to go, Harvick got around the outside of Bowman to take the lead for the first time in the race as Hamlin moved into the second spot behind him.

On Lap 255, Hamlin went to the outside of Harvick and was able to clear him for the lead.

With eight laps to go in the race, Keselowski worked around Harvick and moved into the runner-up position.

Keselowski got around Blaney with one lap remaining and held on for the Stage 2 victory.

Almirola was third, Hamlin fourth and Kyle Busch rounded out the top-five.

Following the break between Stages 1 and 2, the lead-lap cars all pit with Hamlin the first off pit road. On the restart on Lap 87, Hamlin was followed by Truex, Kyle Busch, Keselowski and Harvick.

Byron’s team was penalized during their stop for an uncontrolled tire which meant he had to restart from the rear of the field.

Truex went to the inside of Hamlin off Turn 1 on Lap 98 to move into the lead.

On Lap 100, Wallace spun off the exit of Turn 4 and into the frontstretch grass to bring out a caution. The lead-lap cars all pit again with Keselowski the first off pit road thanks to a two-tire pit stop.

On the restart on Lap 104, Keselowski was followed by Truex and Kyle Busch.

After battling side-by-side for the lead for three laps, Keselowski finally cleared Truex to remain the leader of the race.

On Lap 155, Truex went to the inside of Keselowski and was able to get around him to retake the top spot.

With 40 laps to go in the second stage, Truex had expanded his lead to 1.7 seconds over Hamlin as Keselowski dropped back to third.

After 140 laps, Truex held a more than 2-second lead over Hamlin with Blaney having moved up to third.

With 18 laps remaining in the stage, Chris Buescher spun off Turn 2 and down the backstretch to bring out another caution. All lead-lap cars elected to pit with Blaney the first off pit road thanks to a two-tire stop.

On the restart on Lap 149, Blaney was followed by Johnson, Reddick, Nemechek and Hamlin, who was the first driver on four new tires.

With five laps left in the stage, Blaney managed to remain out front with Keselowski close behind him trying to challenge him for the stage victory.

Kyle Busch took control early and easily held off Hamlin to take the Stage 1 win, the first stage victory of the 2020 season for the reigning series champion.

Truex was third, Blaney fourth and Keselowski rounded out the top-five.

Harvick, who started from the pole thanks to a random draw, didn’t stay there long as Logano quickly moved into the lead at the start and led Lap 1.

On Lap 26, NASCAR displayed a caution to allow teams to check for tire wear. All lead-lap cars elected to pit with Truex the first off pit road.

Logano’s team received a penalty during their stop for an uncontrolled tire and he had to restart from the rear of the field, Buescher received the same penalty as well. Truex led the way when the race returned to green on Lap 31.

Kyle Busch got around Truex on the restart and grabbed the lead for the first time in the race.

With 30 laps remaining in the first stage, Kyle Busch held a small but steady lead over Hamlin while Truex ran third. Blaney was fourth and Keselowski fifth.

With 20 laps to go in the stage, Ricky Stenhouse Jr. was forced to bring his No. 47 Chevrolet to pit road with what appeared to be an electrical fire in his cockpit. Once Stenhouse reached pit road, he exited the car so his team could push it to the garage area.

After 70 laps, Kyle Busch appeared on his way to his first stage win of the season as he held a more than 1 second lead over Hamlin.

Despite late lead, Harvick 'needed a miracle' to win at Kansas