One of the best things about my racing road trip life in 2013 was the variety of events I got to shoot: Indycar, ARCA, GrandAm and of course, NASCAR. While I only got to cover three NASCAR races this year, they were each significant and memorable. I also got to grab a few shots at Michigan during down time from my ARCA duties in June, but the spring and fall races at Talladega were ones for the record books and the Brickyard 400 was noteworthy if not spectacular.

After missing the fall 2012 race at Talladega due to my teaching schedule, I was not about to miss the spring event this year. It turned out to be most memorable for the persistent rains and cool weather which plagued both the Nationwide race on Saturday and the Sprint Cup race on Sunday. I spent nearly 10 hours each day in the main grandstand outside the tri-oval lugging my gear up and down multiple flights of stairs both days, in and out of the rain, waiting for the track to dry and racing to resume. I don't think I've ever shot a NASCAR race in the kind of darkness that descended on the track both days as the rain delays pushed action into the early evening hours both days. The weekend began with a long Friday night drive through heavy rain most of the way and ended just about the same as I left Talladega after dark on Sunday as the rains hit again. The most sensible thing I did all weekend was stop and grab a room around midnight that night and finish the drive back to Indy on Monday. I think I called it the 24 Hours of Talladega at the time and my frog togs never came in more handy! 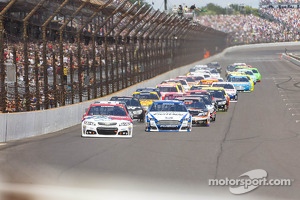 The next NASCAR race I shot was the Brickyard 400 at Indianapolis at the end of July and it was really cool to see Ryan Newman, a Hoosier from South Bend and a Purdue grad, take the win, his first at Indy. The weekend included the Nationwide Series on Saturday and the GrandAm races on Friday, so it was a hectic weekend of shooting and editing for motorsport.com. I walked all over IMS for three straight days but loved every minute of it and have quite a few images I am extremely proud of as a result.

My personal highlight of the Brickyard weekend was shooting Newman, his family and his team during the post race ceremonies at the yard of bricks. His infant daughter seemed bewildered by all the people milling around and the attention her daddy was getting but she never flinched or cried as the kissing of the bricks process wore on. She even seemed at home with daddy's bottle of Coca Cola nearby as the cameras clicked away around her. It was a sweet and quiet moment after hours of noise. The race itself was a typical Brickyard with single file racing in the corners and positions being made up in the pits moreso than on the racetrack. With IMS talking about adding the apron in the turns again, perhaps that will improve the racing product and bring fans back to the Brickyard for NASCAR. At least Jimmie Johnson didn't win!

My final NASCAR race of 2013 took me back to Talladega in October and the weather was infinitely better than it had been in the spring, even though sprinkles Saturday morning washed out Sprint Cup qualifying. The fall weekend had the Camping World Truck Series paired with Sprint Cup and both races involved flying racecars which was just crazy as I couldn't believe what I was seeing through my lenses when the incidents occurred. The truck race on Saturday ended with a flip coming down to the checkered flag and then Austin Dillon got airborne on the last lap in Tony Stewarts's #14 during the Sprint Cup race on Sunday. Jamie McMurray won the Sprint Cup race when no one could mount a charge as the race ended under yellow. 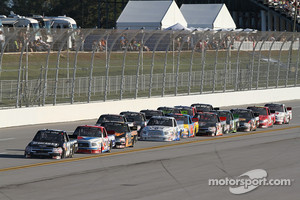 I shot both Talladega races this year for Associated Press and I am so thankful that I have developed that relationship as those people really have taken care of me and given me some great opportunities to "make some pictures", as they like to say. It's awesome to view the post-race slideshow with the other AP photographers and see how they tell an event story through photos. It's also exciting to google my name after a race with AP to see where my pictures have ended up. Calling home after a race weekend like this is also exciting as my friends and family can do a similar search and see my photos picked up by news outlets all over the world. I love that aspect of AP's instant news service and have developed a greater sensitivity for timeliness and efficiency as a result of my work with them.

I have learned so much from other photogs on weekends like these and am really excited to hit the road again in 2014 and head back south to 'Dega. The track's promo tag line is: "This is more than a race. This is Talladega". I can attest to the fact that there's no place like it and just hope to continue having good luck down there. I will be ready to make some pictures, that's for sure. Until next time, here's a slideshow of my personal best NASCAR photos from 2013.

A very important reminder for us all