One photographer is hitting a bucket list race this week, as the 24 Hours of Daytona is ready to get underway.

In another week, if all goes as planned and the racing gods part the wintry Indiana weather and allow my plane to escape Indianapolis, I will be fulfilling another bucket list item on my racing photography journey: The Rolex 24 Hours at Daytona. I have wanted to shoot this race for years and I am very fortunate to finally get the chance to do it with Associated Press. When I heard over a year ago that GrandAm and the American LeMans Series were going to merge, I targeted attending this 2014 edition of the Rolex grind. I knew it would be a historic event, the first for the combined series, now known as the TUDOR United Sportscar Series, and would include all the best teams and drivers from both series under one banner for the first time in over a decade. The only thing missing, it seems, will be the LeMans spec and all conquering Audi prototypes! But I will be there and that's all that matters to me right now.

As a numbers guy I looked over the entry list for this year's race (I teach algebra and geometry after all), this 24 promises an epic battle over four classes among 67 entries. A twitter friend @Shayzen has written a nice piece on all the open wheel drivers who will be racing next weekend, and I encourage you to check it out at her More Than A Fan site. By my count, there are roughly 30 drivers with ties to open wheel racing, including Indy Lights, Indycar and Formula 1. There are three teams entered with drivers "TBA" yet the entry list already boasts 242 drivers among the 67 cars entered! There's an all-Brazilian driver team (#65 Scuderia Corsa) that will wheel a Ferrari 458 Italia. There's another team, also using a Ferrari 458, with three Russian drivers, including the newest Indycar rookie, Mikhail Aleshin. Oddly enough there are only two drivers listed with NASCAR connections, and one of them is the hottest young guy in racing right now: Kyle Larson. I could count Kyle as an open wheel guy too since he came up through USAC. It appears that lady racers outnumber the stock car boys as I noted 3 women drivers listed. Katherine Legge has arguably the plum job of the women entered: co-piloting the radical Deltawing machine. Can't wait to see that machine at speed! 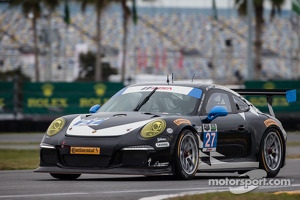 All of these men, women and machines are vying for the coveted Rolex watches which all the winners get. With 19 of the big prototypes and all the best North American sports car racers in attendance, the race will almost surely be a series of sprints between pitstops. The top protoype teams are still the ones people will recognize - Ganassi, Wayne Taylor Racing, Gainsco, Muscle Milk, Starworks, Michael Shank, Action Express - and they have most of the big names behind the wheel, as well as team cars in many cases so different strategies can be pursued. I think this 24 is wide open and I wouldn't be at all surprised if one of the Prototype Challenge teams made its way to the front and won. Winding their way through 40 GT cars will make for exciting racing. Then there's always the element of weather to add to the mix: rain, cold, fog, etc., not to mention a grueling trek through over 12 hours of darkness where everyone is just trying to get to sunrise Sunday morning to hit the reset button and go for the win.

My pre-race favorite still has to be the Ganassi #01 entry with Scott Pruett as the lead driver. I have been wacthing Scott race since the glory days of Trans Am in the 80's and he knows how to win these endurance races, and so does the Ganassi team! But the 24 Hours is a truly global event with drivers, support personnel, engineers and crews representing countries throughout the industrialized world. I am so excited to have the chance to walk through the garage area and down pit lane to hear the cacophony of languages being spoken.

The universal language of speed will tie us all together, and I am hoping that this trip south will be both creative and fruitful. Sports car racing also has its share of star power and sometimes plays out like a hollywood script. If you saw the effort put in by Dempsey Racing at LeMans last year, then you know what I mean. And if the maze of car classes and acronyms for the new Tudor series makes your head spin like it does mine, then be sure to check out Tony DiZinno's blog post which likens sportscar racing to the periodic table of elements. Let's hope that the mixture of the GrandAm and ALMS elements this year is not too volatile, but then a race twice around the clock has the potential for just about anything to happen. I can't wait to get there and get to work! Until then, here's a few pix from my GrandAm and ALMS work the last couple of seasons to get you going. See you at Daytona