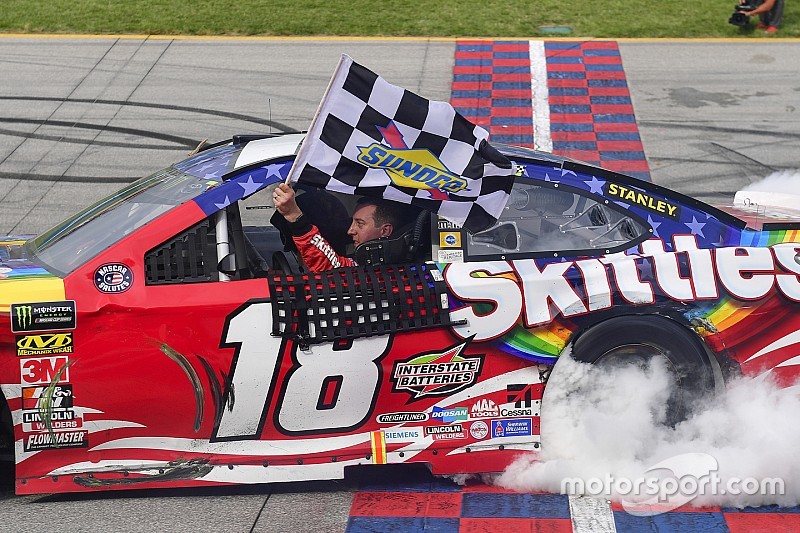 There may well be one very good predictor of the next Cup Series champion and not one many may consider.

Strangely enough, there is only one other track in the Cup schedule that has used the exact same Goodyear tire combination as Homestead-Miami Speedway the last four years and will do so again this Sunday in the Ford 400 – Chicagoland.

In each of the last four years – which coincides with NASCAR moving to the “winner takes all” title format – the driver who ultimately won the series title also had the best overall performance at Chicagoland that same season.

In 2014, the final four drivers were Kevin Harvick, Ryan Newman, Denny Hamlin and Joey Logano. Harvick had the best car out of those four at Chicagoland, finishing fifth and leading 79 laps (Logano did finish fourth but led no laps). Harvick went on to win the championship.

In the 2015 season, the final four were Kyle Busch, Harvick, Jeff Gordon and Martin Truex Jr. Busch had the best car out of those four at Chicagoland, finishing ninth and leading 121 laps in the race. Busch went on to win the championship.

In 2016, the final four were Jimmie Johnson, Logano, Busch and Carl Edwards. Johnson arguably had the best car out of those four at Chicagoland, finishing 12th but leading 118 laps (Logano was second and Busch eighth finished better than Johnson, but they led only 1 and 21 laps, respectively). Johnson went on to win the championship.

Last year, the final four were Truex, Busch, Harvick and Brad Keselowski. Truex, by most standards, had the best car out of those four at Chicagoland, winning the race and leading 77 laps (Busch finished 15th and led 85 laps while Harvick finish third with 59 laps led). Truex went on to win the championship.

High wear tracks bring tire management into play, with some drivers gaining spots by going hard early in a run, while others gain late by conserving their tires early and having more long-run speed.

While the amount of fall-off during a run can be more than two seconds per lap, the rate of that fall-off may be different for everyone. That ultimately has a positive effect on the racing as it creates more “comers” and “goers” throughout a run, which in turn leads to more passing.

“While the track surfaces are a little different, Homestead has traditionally lined up with Chicagoland, as far as a tire set-up,” said Greg Stucker, Goodyear’s director of racing. “This weekend, we are bringing the same combination we ran in Joliet this past summer.

“Because of the high wear we see, these compounds provide the endurance and tread wear needed for Homestead’s track surface, while at the same time giving the cars enough grip. That is highlighted by the fact that this right-side tire is one of our multi-zone tread tires with the inboard being more heat and wear resistant and the outboard providing more grip.”

So given all of that, what do this year’s Chicagoland race results predict for the outcome of Sunday’s final four title contenders of Harvick, Busch, Truex and Logano?

This year at Chicagoland (which moved its race to July from September), Busch won the race with 59 laps led; Harvick finished third with 39 laps led; and Truex was fourth and Logano eighth, both with no laps led.

The Chicagoland predictor points to a second Cup series title for Kyle Busch.

Cole Pearn: “It's been an emotional time for all of us” at FRR