KTM's new MotoGP signing Johann Zarco admitted he was left with mixed feelings after being “a bit slow” in his first run with the RC16 bike.

Johann Zarco, who has been a regular frontrunner in the premier class in his two years on a 2016-spec Tech 3-run Yamaha, made his debut on a KTM in the Valencia November testing.

He was the first rider to hit the track in testing, but ended the rain-curtailed opening day only 17th, 1.4s off the pace and over six tenths down on new teammate Pol Espargaro.

Speaking to media afterwards, Zarco stressed he was buoyed the potential he saw in the factory team, but also added: “Little bit down feeling about the laptime that didn't come easy.

“We had to change quite a lot of things on the bike just to find the base of the bike. Is not a drama because it's the first day, it's really another spirit of bike compared to what I had during two years in MotoGP.

“Once we're going to find a good base, I hope tomorrow some dry condition to start immediately at the better level of the bike.

“We have been a bit unlucky that the rain start because we were not using the new tyres to try to be really fast, and we were on the way to have at least a better position today, but no time.

“So, half and half feeling.”

Zarco said his biggest problem on Tuesday had been a lack of confidence on corner entry.

“Valencia, it's a small track that you must feel comfortable to go fast into the corner, that was maybe the weak point today of the bike,” he said.

“It was not possible to play with the speed in the entry of the corner, so then you lose the time if you come too slow, you cannot be fast.

“I think it was good to understand it already now. We don't have any problem about tyre, rear grip, rear spinning, I cannot complain about those things because we are still not fast enough.

“We need to make clear the things and then, when we will be quite fast, we will have the potential to work well.

“I would say the entry of the corner has been the most difficult part for me, that's why I've been a bit slow.” 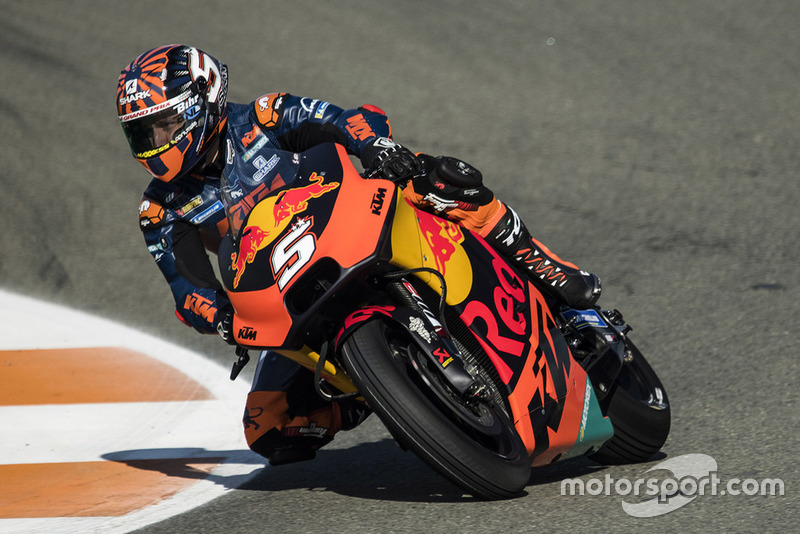