Yamaha needs a “miracle” to avoid a winless season in MotoGP this year, Valentino Rossi has said following a tough opening day of practice for the Aragon Grand Prix.

Rossi and his teammate Maverick Vinales ended Friday’s second practice session ninth and 10th fastest, both over a second off the pace set by Honda rider Marc Marquez.

This comes as Yamaha stands on the cusp of its worst-ever losing streak in MotoGP, having matched its previous tally of 22 races with no win last time out at Misano.

But Rossi says there is little hope of the Iwata marque winning any of the final six races this year, let alone at Aragon where it has struggled in recent years.

“It’s my job, so all I can do is try to give the maximum,” said Rossi.

“Barring a miracle, I don’t think we will win a race this year. But we are here to try and at least have some decent races.

“This is the situation: we need to be calm and hope for better in future.”

Explaining his problems in more detail, Rossi said he was having trouble on corner entry, as was the case two weeks earlier at Misano, where he finished a disappointing seventh.

“[At Misano] In FP4 I was P6 or P7, one tenth from the top, and my pace was very strong,” he recalled. “It was more or less the pace of [Andrea] Dovizioso in the race.

“But the next day, in the same conditions, me and Maverick lost 0.6s, 0.7s, more than half a second. This is the problem.

“Here it’s similar, but usually Misano is a good track for us. Here, also the track doesn’t help a lot. But it’s like this. We have to try.”

Vinales came into the Aragon weekend confident off the back of a strong test showing in the last week of August at the Motorland track, but was baffled to find “zero grip” on Friday.

“I think I was trying so much because the feeling after the test was so good and [I was] so confident that today when I found the track was, that feeling that I had, zero grip on the track,” said last year’s Aragon polesitter.

“Honestly was difficult for me, also because I was used to do one line during all tests, and now impossible so I needed to change a little bit the riding style.

“I slide so much on the rear, straight and on banking so I can't push. I am really slow going into the corner, that is the problem.

“The tyres are completely the same than in the test and in the test I had grip, so we need to try to figure out what is going on.” 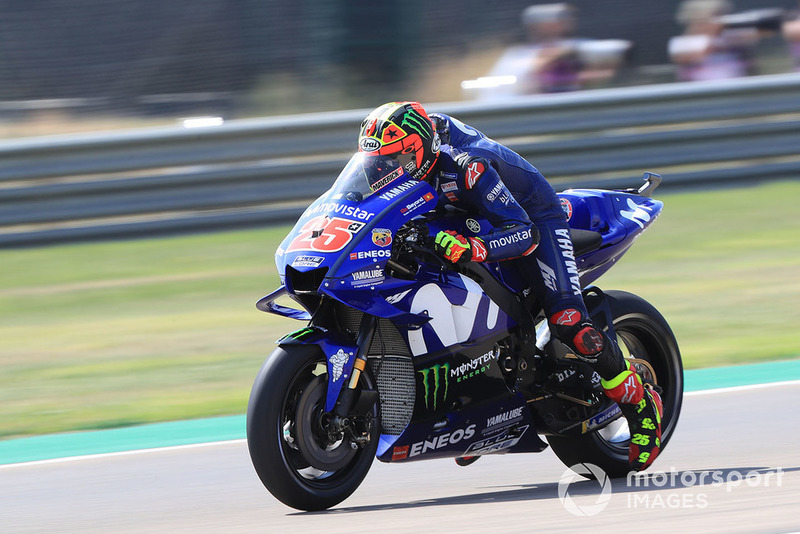