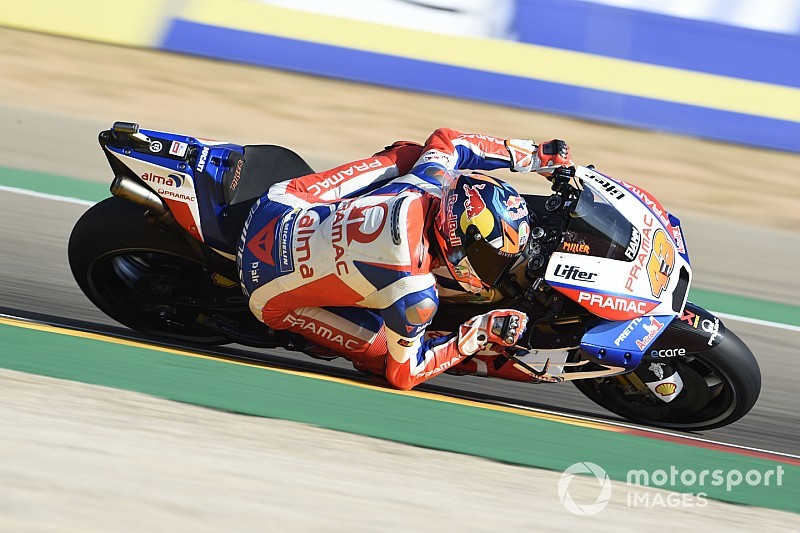 Jack Miller says a rogue warning light on his Ducati MotoGP bike's dash and concerns over tyre chunking hampered his progress during the Aragon Grand Prix.

The Australian had a reasonably lonely race on his way to ninth at Aragon, his on-track action mostly limited to a brief squabble with Valentino Rossi in the closing laps.

But while the race may have looked straightforward from the outside, Miller reckons it was anything but from his perspective.

He says concerns over tyre life in the hot conditions were heightened by a faulty tyre light that illuminated on his dash on the first lap, while a vibration left him worried about 'chunking' at high speed.

"I was eighth and starting to crawl back towards my teammate [Danilo] Petrucci with seven or eight laps to go, and then I had this feeling like the bike had jumped out of gear or something, because I had this huge vibration," he wrote in his Red Bull column.

"I thought I'd delaminated the rear tyre on the left-hand side, so that was a bit of a panic because I thought I was probably going to have to retire or crash.

"I'd been riding with one eye on that because the whole race, from the first lap, the tyre light came on my dash warning me about the tyre consumption. I knew that wasn't right because it was so early in the race, but you knew it was coming, and I just kept counting the laps down waiting for a drama.

"Seeing a tyre light every corner make it hard to keep calm, that's for sure."

Miller added that his concerns over the vibration helped bring Rossi into the fight for eighth towards the end of the race.

"When that vibration came, lap 17 I think it was, I immediately dropped my pace back half a second or more into the 1m50s which left me exposed to Valentino coming up from ninth, and he got me with less than two laps to go," he explained.

"I had nothing for him at that stage, I wanted to fight him but the tyres definitely didn't.

"When I got off the bike, the tyre looked fine as far as the chunking goes – there were no bits hacked out of it – but it was destroyed.

"Maybe the vibration came from the gearbox, we're still not sure until we look into it a little bit more."