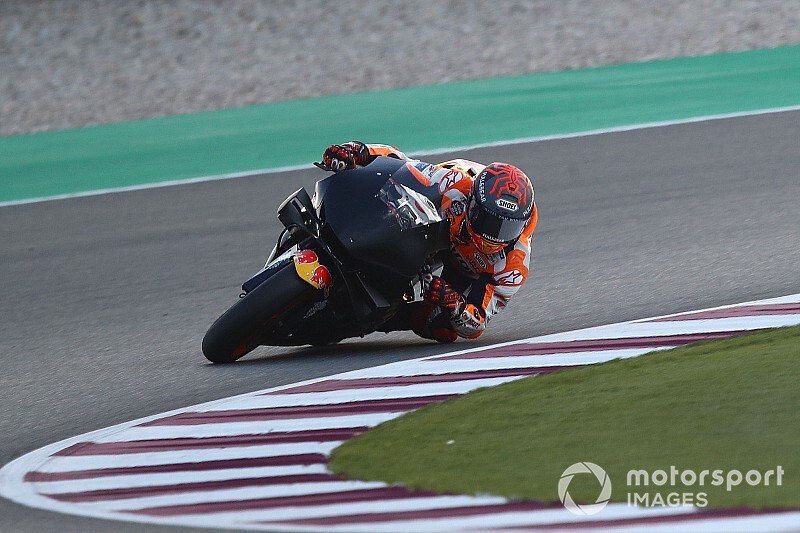 MotoGP champion Marc Marquez says Honda has “found the way” with its troubled 2020 RC213V, following a pre-season testing phase which had the injured Spaniard “worried”.

Marquez’s pre-season has been hindered by ongoing recovery from a shoulder operation in November, though he admitted after a difficult Sepang test that he was more worried about the bike than his injury. Honda’s woes – mainly surrounding corner entry and poor turning – continued on the first two days in Qatar, with LCR’s Cal Crutchlow revealing he was having to ride the bike “quite amateur” just to stay on it.

So worried were Honda that Marquez was given one of LCR’s Takaaki Nakagami’s 2019-spec bikes to try on the final day of the Qatar test on Monday. After trying various parts, Marquez believes Honda has found a way forward with its bike.

“In the last day, already I think here in 2016 we did the same way,” Marquez, who was seventh fastest on Monday, said. “But we found the way. Already in Malaysia there was some problems that I didn’t understand, some strange crashes in the fast corners that normally I’d save but I was struggling a lot, and yesterday, again, another strange crash.

“Maybe I’m thinking always about my physical condition, I say [to myself] ‘I’m riding the same like always’, but then I saw that all of the [Honda] riders were struggling; not only my team-mate, who is a rookie, but also Cal.

“I want to say thanks to Honda, to all my team, to all my mechanics because they did a great job. They concentrate all the power and all the effort inside my box and we find the way. I was riding very good, we understand many things, we test some 2019 parts to try understand where was the problem and we found the problem.

“So this is the most important thing of the pre-season, not only of the day, because yesterday we were very far and was not enjoying riding the bike, and today I enjoyed it and we were much closer.”

Asked if Honda made progress with turning, he said: “We were missing the front feeling. The entry of the corner was not good, and then we didn’t have the speed of the turning. And then we tried to recover the grip on the exit – the speed what we lose on the entry – and then we lose the grip.

“So, entry improved, mid-corner improved, so exit was faster.”

Marquez tried the old Honda aerodynamic fairing on his ’20 bike on Monday, and retried a chassis he’d previously tested but found little gain with. Now that Honda has found a direction to go, he admits it will have to re-try many things in the coming race weekends.

“We tried a different chassis too at the end of the day,” he added. “The problem is all the work we did this pre-season was not working and always… we start in one point, we try many things, and we finish in the same starting point.

“So now that we found the problem, we need to re-try all the things.”