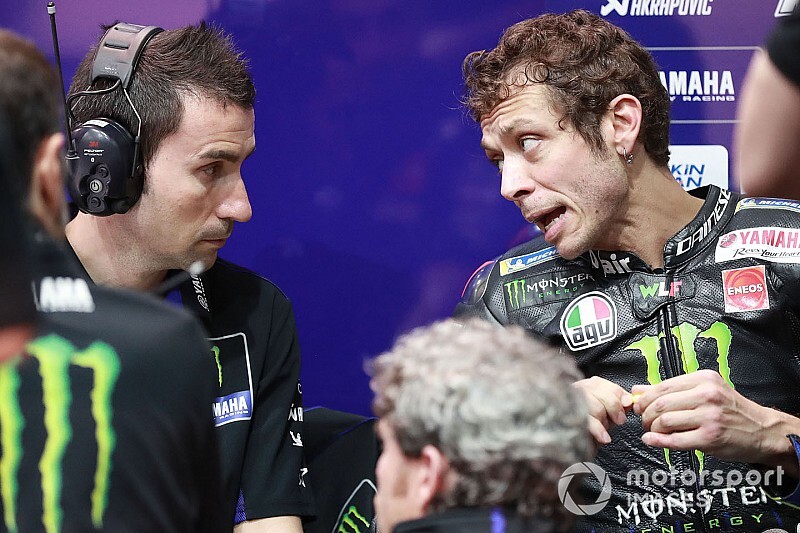 Valentino Rossi admits he is “worried” about the 2020 Yamaha’s race pace ahead of the first race of the new MotoGP season, as he is still ‘suffering’ with tyre wear.

In recent years Yamaha riders have constantly struggled in races with rear tyres beginning to fade too much halfway through a race distance. Michelin’s new-for-2020 rear tyres have been designed with the aim of offering better durability and a more gradual drop-off, while its increase in grip seems to have offered Yamaha and Suzuki riders a small advantage over their rivals.

However, speaking at the end of pre-season testing in Qatar, Rossi admits the issue with tyre wear still persists for him.

“I was strong with the first tyre, and unfortunately I crash with the second tyre [while on a time attack],” said Rossi, who ended Monday’s running in Qatar 12th. “So for this reason I am P12, but we are more worried for the pace because like last year in the second half of the race we suffer, we suffer with the tyres, especially with the rear and unfortunately I’m not able to keep the pace.

“We tried [a long run] yesterday, we tried the first day and today we try two times. We have some data and we have to understand why and try to fix before the race.

“General feeling [on the bike] is not so bad, because today we improved the setting, we fixed the setting and I was good. In the first laps I’m always quite fast, but this problem [with tyre wear] is a big problem for us and is very similar to what happened last year.

When asked if the problem was slightly better than it was last year, Rossi added: “[It’s] very similar. Also, [it’s] difficult to understand because also in Malaysia, Malaysia was very good.

“Also, the pace with the used tyre was not so bad. Here we suffer more.”

Rossi’s day was interrupted by a tumble at Turn 2 early into the evening, which he pinned on being just slightly off-line on the way into left-hander.

“I did a good laptime on the first tyre, and I tried to push on the second one because usually you are able to improve,” he said.

“Unfortunately I think I entered into Turn 2 a little bit more on the right and on the first lap that corner you always need to pay attention and I lost the front. But I’m OK.”