Pol Espargaro says his crash in fourth practice for the MotoGP Austrian Grand Prix was because he was “super pumped” about his pace at the Red Bull Ring. 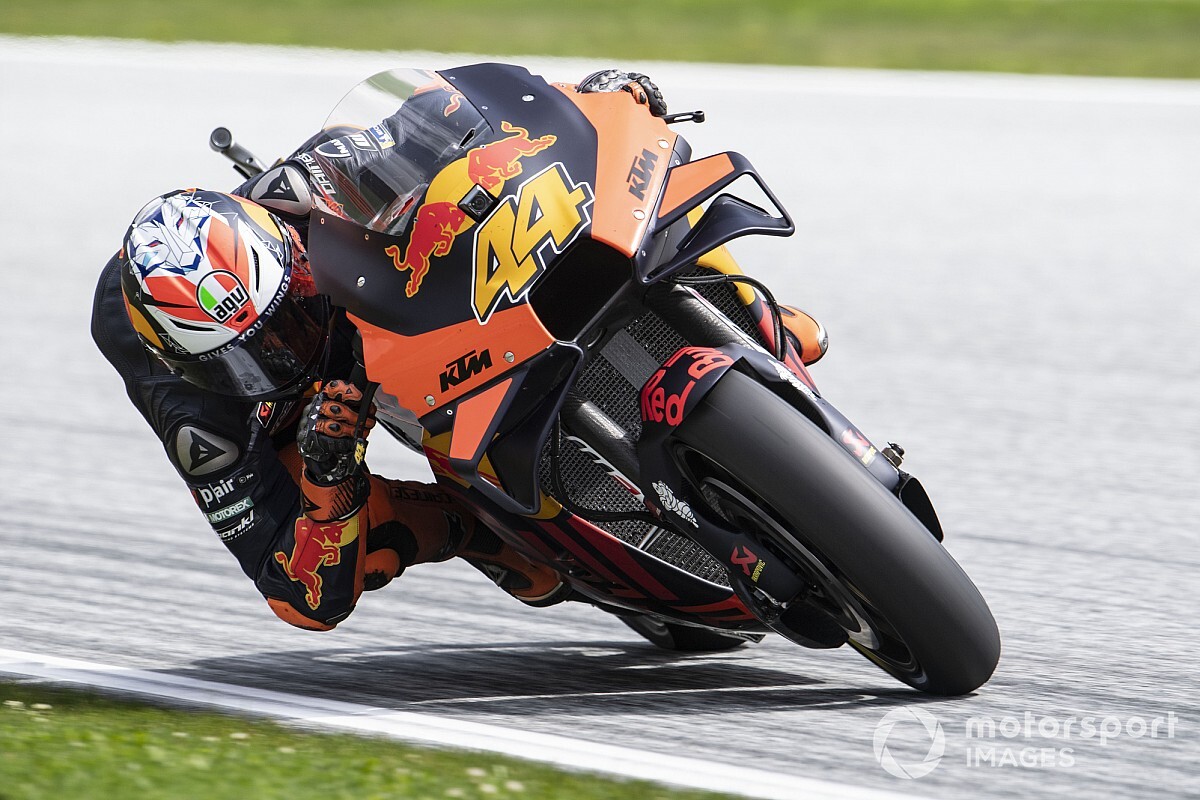 The KTM rider came into FP4 fastest on the combined times and led the way in the final 30-minute practice ahead of qualifying having focused on his race pace.

A crash in the closing seven minutes at the Turn 9 Rindt right-hander wrecked his number one bike, leaving him with just one RC16 for the Q2 session. Espargaro missed pole by just 0.162 seconds and will start KTM’s home grand prix from fifth on the grid, though feels “ready to fight”.

“It was a good day, overall it was amazing,” said Espargaro. “In FP4 we by far did the best rhythm of the grid and that is super important for tomorrow. But unluckily… I would not say made a mistake, but I was super pumped on the bike, riding in a very good rhythm, I was just going faster and faster and faster. And that lap [when I crashed] I was coming even faster, but maybe too fast and I crashed.

“This for sure doesn’t help for qualifying. We missed the pole position by 0.160s, so imagine how tight it is without the crash, using the second bike – the one I was not used to riding. It was a good day for sure, we always deserve more. Also, in the last lap I was on a good lap to be on the front row, but I did some mistakes.

“When you are pushing it can happen. No complaints, we are happy, P5, second row for tomorrow and ready to fight.”

Espargaro’s race run in FP4 consisted of 14 flying laps – 12 of which he circulated the Red Bull Ring comfortably in the mid 1m24s bracket on the medium rear tyre.

Expanding on his Saturday, Espargaro believes without the FP4 crash ‘taking some confidence’ away from him he would have been on pole – but insists it was more important to show his potential on the KTM for Sunday’s race.

“Yeah, for sure I think if I didn’t crash the pole position might have been possible,” he added. “The crash took some confidence out and then I needed to use the second bike because the first one was destroyed, and normally I feel a little bit of difference. The pole position was just 0.160s away, so we are talking about nothing.

“Every single point counts and I did that mistake in FP4, but anyway for me it was more important for me to build up my confidence on the race pace and show that tomorrow it’s possible to fight for something.”

MotoGP on TV today – How can I watch the Austrian Grand Prix?