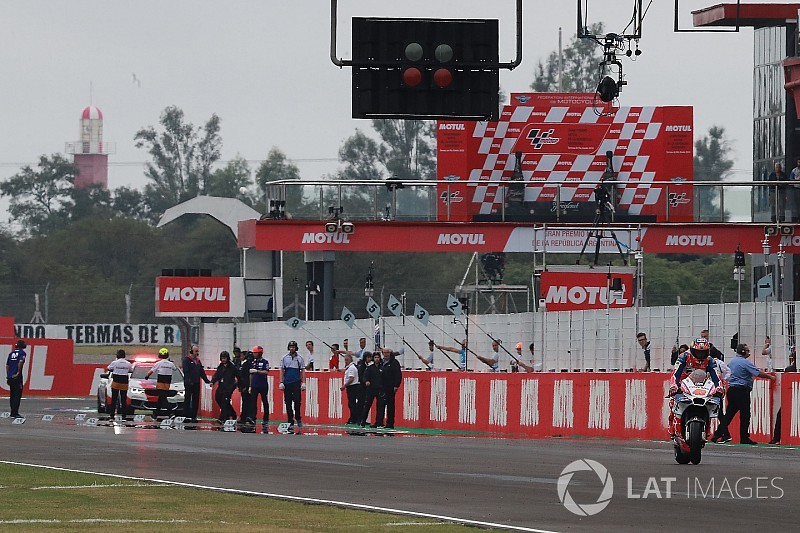 MotoGP has issued a new set of grid procedures that will come into force for the next round at Mugello in the wake of last month's controversial Argentina race.

Prior to the start of the Termas de Rio Hondo event, every rider barring poleman Jack Miller pulled off the grid to switch to their slick-shod second bike for the start on a rapidly drying track.

Wishing to avoid a potentially unsafe mass pitlane start, organisers suspended the race and gave Pramac Ducati rider Miller an advantage of six rows on the grid to compensate for his lost advantage.

But the Australian was caught and passed by Marc Marquez on the second lap and ended up fourth.

Now MotoGP organisers have agreed on a different system for future races where a large number of riders decide to change bikes before the start, which was announced at Le Mans on Friday evening.

From Mugello, any rider who pulls off the grid to change on to a bike with different tyres will now be able to start on their grid slot as normal, but will have to serve a ride-through penalty during the race.

If a rider changes to another bike with the same tyres, they will simply start from the back of the grid.

In cases where riders pull into change bikes and tyres after the warm-up lap, they will also have to serve a ride-through penalty in the race.

It has also been agreed that a mass pitlane start cannot take place with more than 10 bikes. In such cases, the race will be suspended with a 'quick start' procedure put into place.

Had the above measures been in place for Argentina, it would have meant a normal start - avoiding the unusual sight of Miller being alone at the head of the grid - with all riders bar Miller being forced to serve a ride-through penalty for having changed tyres before the start after the pitlane closed.

Riders are still permitted to change bikes and tyres without penalty for five minutes after the sighting lap, at which point the pitlane is closed.

Miller aims to prove he can be ‘all-rounder’ to Ducati