Pramac Ducati’s Jack Miller ended second practice for the MotoGP French Grand Prix fastest of all as the tricky conditions led to a number of crashes late on. 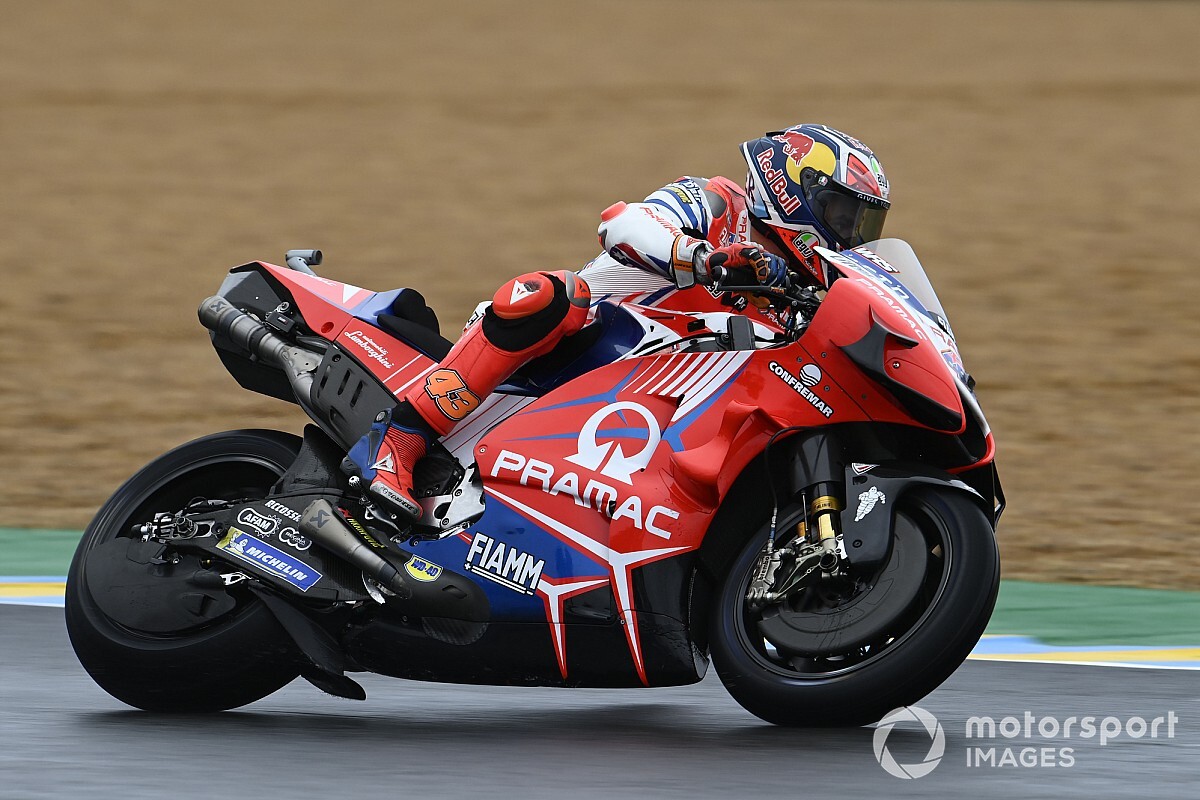 Spots of rain just before the session was given the green light meant only a handful of riders, including Joan Mir on the Suzuki, Yamaha’s Valentino Rossi and Miller, headed out on circuit.

Rossi had opted straight away for a slick medium rear tyre, but quickly aborted the run after his best flying lap was some 3.7 seconds slower than Mir’s wet-shod effort of 1m43.515s.

Johann Zarco soon took over top spot with a 1m41.811s, while several more who’d fitted slick tyres early on bailed out to switch to wets.

However, Miller went in the opposite direction and began lighting up the timing screen once he’d gotten his soft slicks up to temperature.

Miller’s times forced more into giving the slicks a try, with LCR’s Takaaki Nakagami setting the pace at 1m36.320s with 15 minutes remaining.

A flurry of fastest laps meant Alex Rins on the Suzuki and Nakagami traded top spot, with the Honda rider seizing control with just under 10 minutes of the session remaining with a 1m35.612s.

Nakagami’s charge came to an end just as the chequered flag came out when he slid off his RC213V at the Blue Esses section at Turn 11.

The tricky conditions caught out several riders in the closing stages, with the Aprilias of Aleix Espargaro and Bradley Smith, Ducati’s Andrea Dovizioso and KTM’s Brad Binder all suffering crashes.

Miller’s final effort of 1m34.133s put him 0.367s clear of the field to end FP2 top ahead of Yamaha’s Maverick Vinales and Nakagami.

Zarco was fourth after suffering some form of technical issue on his Avintia Ducati earlier in the session, while Rossi and Ducati’s Danilo Petrucci completed the top six.

Cal Crutchlow was seventh on his LCR Honda having been top briefly in the closing stages, with works Honda rider Alex Marquez, Petronas’ Franco Morbidelli and the KTM of Pol Espargaro rounding out the top 10.

Should any rain arrive for Saturday’s FP3 session, the Suzuki’s of Mir and Rins, as well as championship leader Fabio Quartararo on the Petronas Yamaha may face Q1 having missed the top 10 in FP2.

Dovizioso’s late crash at the Dunlop chicane meant he could only muster 19th on the timesheets.