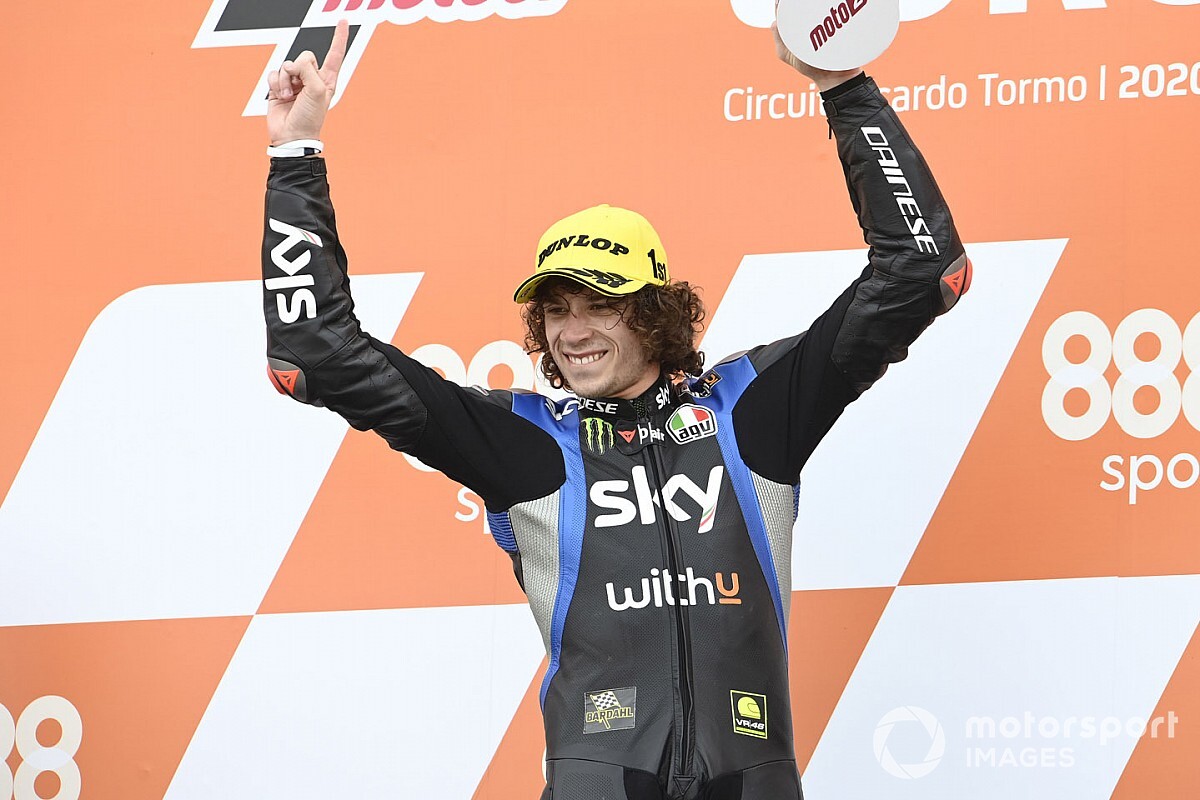 Moto2 race winner and Valentino Rossi protege Marco Bezzecchi has emerged as a leading candidate to replace Andrea Iannone at Aprilia for the 2021 MotoGP season.

The Court of Arbitration for Sport ruled on Tuesday it had rejected Iannone's appeal to have an 18-month doping ban overturned having not submitted sufficient evidence to back up his defence of accidental ingestion of a banned steroid through contaminated meat at the Malaysian Grand Prix last year.

CAS ruled in favour of the World Anti-Doping Agency, with Iannone's ban extended to the maximum four years.

Iannone issued a statement earlier on Tuesday criticising the ruling and saying it "ripped my heart apart from my greatest love".

Aprilia has stuck by Iannone through proceedings and has always publicly stated its desire to retain him for 2021 if it could.

However, with Iannone now unable to race until at least 2024, Aprilia needs to find a replacement to join Aleix Espargaro next year.

Motorsport.com understands Bezzecchi has gained keen interest from Aprilia and has emerged as a favourite to take the seat.

Bezzecchi is in his second year in Moto2 currently with the VR46 team and is just 29 points off the championship lead following his second win of the season last weekend in the European GP.

Aprilia will need to strike an agreement with the VR46 team if it is to secure Bezzecchi, as the 22-year-old has signed to remain with the team in Moto2 for 2021.

Should Aprilia prove successful, Bezzecchi will join current VR46 teammate and Rossi's half-brother Luca Marini on the MotoGP grid – who will join Avintia alongside current Moto2 points leader Enea Bastianini after both penned a deal with Ducati for 2021.

It has long been though outgoing LCR Honda rider Cal Crutchlow was favourite for the second Aprilia seat, having signed a pre-agreement with the marque.

However, it is now understood the agreement was one of intent and it expired in mid-October when Iannone's hearing with CAS took place.

It is thought Yamaha has since offered him the test rider role Andrea Dovizioso has passed over to take a sabbatical in 2021, with the deal rumoured to have been signed last weekend.

The third option for Aprilia could be outgoing Avintia rider Tito Rabat, who would bring substantial backing with him to the outfit.