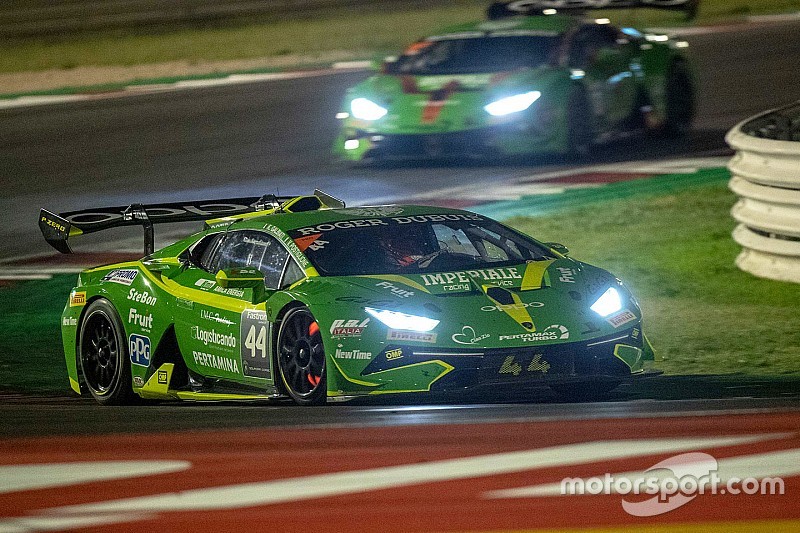 Imperiale Racing duo Vito Postiglione and Kikko Galbiati extended their lead in the Super Trofeo Europe standings after a clean-sweep of wins at Misano.

Galbiati made the most of a late-race slip-up from Polish teammate Bartosz Paziewski to win Saturday evening’s opening encounter.

Postiglione then withstood a fierce charge from Basz in the afternoon race on Sunday to double up and claim a third straight win.

Having topped qualifying by a staggering 1.036 seconds, Basz leapt away at the start of the first race and looked certain to claim a first win of the season.

Paziewski kept the #8 in front after the mandatory pit-stop and remained comfortable despite falling into the clutches of the Galbiati in the #44 entering the closing stages.

The Pole then appeared to struggle with brake issues in the remaining laps and trailed his teammate to the line by just under 10 seconds.

Pro-Am spoils went the way of Harald Schlegelmilch and Shota Abkhazava, while Raffaele Giannoni won the Am class with a superb eight overall.

Galbiati lost out in a side-by-side battle with Middleton at the exit of Turn 1 and dropped to third early on, but re-took the position on lap four.

Middleton headed a lively battle for third between Paziewski, Jonathan Cecotto and Schlegelmilch ahead of the pit-stops.

Following a debris-induced safety car period, Postiglione emerged as the leader after the pit-stops, heading Necchi and Basz.

Basz closed the gap hand-over-fist and was just under half a second behind the defending champion entering the final two laps.

The pair went side-by-side on the fast run down to the kinks, with Basz briefly taking the lead.

Postiglione just about hung onto the lead and fended off another last corner lunge from Basz to claim another win.

Necchi and Spinelli held on to finish an impressive fourth place and took Pro-Am victory.

Jake Rattenbury and Mikko Eskelinen took Am honours in the #3 Leipert Motorsport Huracan, with 11th overall.