Imperiale Racing duo Vito Postiglione and Kikki Galbiati closed to within just five points of the Lamborghini Super Trofeo championship lead following a pair of dominant victories at the Nurburgring.

The Bonaldi Motorsport crew of Danny Kroes and Sergei Afanasiev continue to lead the championship ahead of the final two rounds at Jerez next month, but with a significantly reduced margin following a brace of third place finishes.

Kroes started Saturday's opening race from pole and led the sister Bonaldi car of Jack Bartholomew into the first corner.

Galbiati got the better of Bartholomew exiting Turn 4 and began closing in on Kroes approaching the mandatory driver-change pit-stops.

A quicker stop from the Imperiale Racing crew allowed Postiglione – who had taken over from Galbiati – to emerge in the lead as Kroes handed over the commands of the #3 Bonaldi Huracan to Afanasiev.

From then on, Postiglione gradually extended his advantage at the front, setting successive fastest laps to ease to a 14.525s win.

Alberto di Folco and Davide Venditti claimed the final step on the podium in third after a thrilling three-way battle with Afanasiev and Bartholomew's teammate Stuart Middleton.

Former British GT4 driver Middleton had held onto third following the pit-stops and seemed to have the measure of Di Folco and the Leipert Motorsport car of Anthony Lambert behind before spinning through the fast Schumacher Chicane.

Middleton did a full 360 degree spin but only dropped two places before finding his way back past Lambert on the final lap to finish fourth.

Schlegelmilch started from the back of the grid following qualifying issues and also received a jump-start drive through penalty early on.

Postiglione got a perfect getaway from the rolling start in Sunday's second race, beating Middleton and Afanasiev into Turn 1, as further back Jose Collado tipped his fellow Am class runner Steven Liquorish into a spin.

This brought out the safety car for a solitary lap, with Postiglione able to build a comfortable three second margin over Middleton ahead of the stops.

Middleton managed to close the gap to Postiglione to just under two seconds by the time he made his stop, but the latter maintained a slender margin which he would subsequently ease out to 5.707s by the flag.

Behind the leading duo, Afanasiev broke clear of a raging battle between Di Folco and Schlegelmilch – who was joined by Abkhazava – for fourth.

Di Folco leapfrogged Afanasiev following a slower stop for the #3 car, but Kroes slid back past the Target Racing srl machine under braking for Turn 10 to re-take third.

Galbiati was untroubled en route to his and Postiglione's fourth win of the season – and second double after Misano – to move the pairing closer to Kroes and Afanasiev in the standings.

The battle for supremacy in the Am class was a weekend-long battle between AGS Events' Nico Gomar and Gilles Vannelet and the GT3 Poland entry of Robert Zwinger.

Zwinger came out on top in the first race after the pole-sitting Leipert Motorsport car of Mikko Eskelinen and Jake Rattenbury lost ground after the pit stops.

Gomar led the second race early on and kept ahead after the stops, with Zwinger eventually falling adrift by 16s by the end.

The championship concludes at the World Finals at Jerez de la Frontera next month, with all titles being decided at the final round of the season. 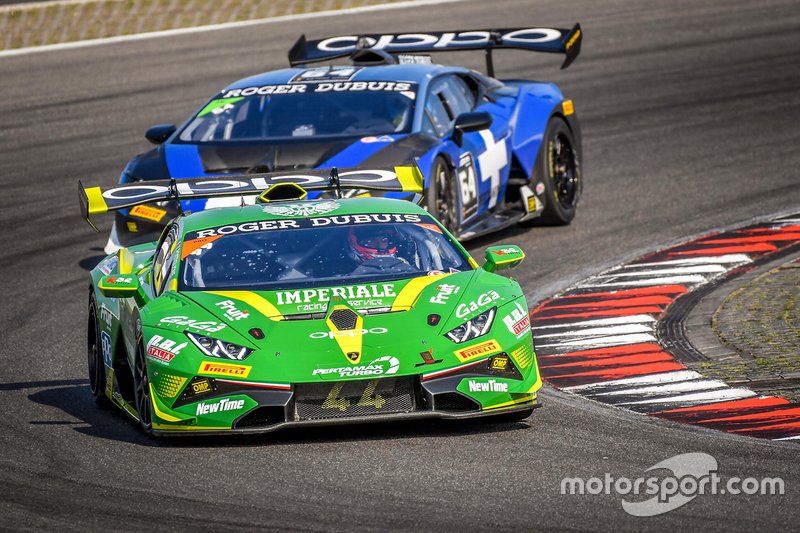 Italian GT: Kristoffersson and Frassineti save the best for last winning Monza finale