There is a strong chance of an LMP2 car finishing on the overall podium in this year's Le Mans 24 Hours, believes one of the drivers that achieved the feat three years ago, Oliver Jarvis.

The trio finished second overall in that race, only losing the lead with just over an hour to run to the winning Porsche 919 Hybrid, as all five manufacturer-entered LMP1s either retired or suffered significant delays due to reliability issues.

With just two Toyotas and three privateer LMP1s - two Rebellion R-13s and a single ByKolles ENSO CLM P1/01 - entered in the top class this year, Jarvis told Motorsport.com that he feels there is a "really good chance" of an LMP2 car making the top three overall.

"I don’t see the chance to nearly win it like we did in 2017, those were exceptional circumstances," said Jarvis. "Unless it’s driver error, both Toyotas will finish the race. They’ve been working with this technology for a few years.

"But certainly with the privateers, you’d expect them to run into reliability issues. You only need a couple of cars to hit trouble and then an LMP2 is back on the podium.

"Third [overall] is a real possibility. In fact, I would say there’s a better chance of there being an LMP2 on the podium than not." 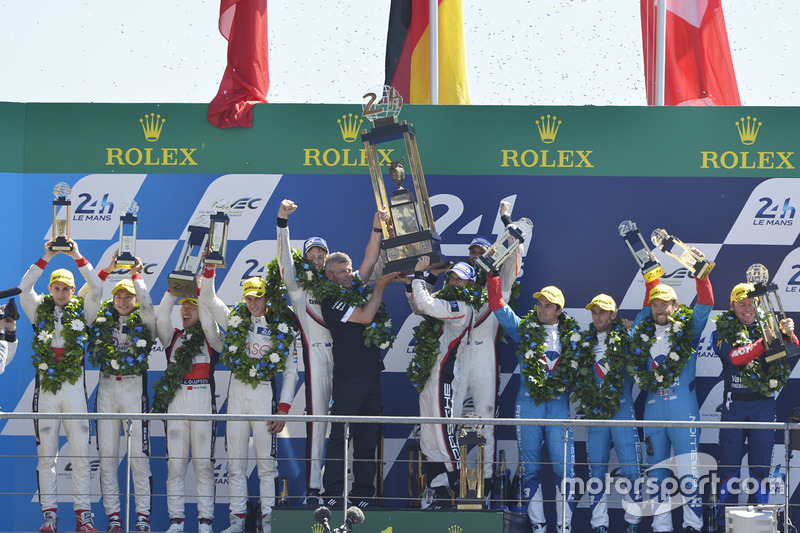 After making his debut in the GTE Pro ranks for Risi Competizione last year, Jarvis will be contesting Le Mans in the LMP2 class for a second time this weekend in a G-Drive-backed second entry from the Algarve Pro Racing squad.

He'll be sharing the team's #16 Oreca 07, one of five Goodyear-shod cars in the 24-car LMP2 field at La Sarthe this year, with ex-Porsche LMP1 star Nick Tandy and Ryan Cullen.

Asked for his expectations for the race, Jarvis said: "I think it’s really difficult to predict. It happened late, we haven’t done any testing, Nick hasn’t been in an LMP2 car for a few years, but there are no excuses; the aim is to go out and get a good result.

"It’s an extremely competitive field this year, but I like to think we’re more than capable of being in the fight at the end."

He added: "When I look at the pro names, and some of the silvers are right up there, it’s an incredible category this year in terms of depth. For me that’s going to be where the race is really at, in terms of pure competition.

"With 24 cars, even if two or three of the favourites hit problems, there are another three or four there to pick up the pieces.

"The [current-generation] LMP2 cars are in their fourth year now, reliability is improved, and the teams are experienced running them, so I expect the majority of the field will run without issues. So it’s going to come down to the drivers."