The idea of Takuma Sato joining forces with Chip Ganassi Racing-Honda should be giving his Indy 500 rivals some restless nights. The Japanese veteran tells David Malsher-Lopez why he’s so excited by his latest IndyCar opportunity.

Dale Coyne stated that his contract with Sato last year was one-year with a one-year option, that included a clause that precluded him from racing for any other team in 2023. Sato’s manager Steve Fusek confirmed in the summer and the off-season that, yes, that was the deal.

However, there was some wriggle room – a matter on which Coyne doesn’t wish to comment, even as late as yesterday – and with Sato’s financial support from Honda Japan and Panasonic being reduced, Coyne adjusted his intentions. He would, he told Motorsport.com, prefer to add a third car for Sato to run an oval-only program.

While most admire Coyne, delight in his occasional successes, revel in his David-beating-Goliath achievements, one can understand why a driver in his career twilight would want his numerically reduced opportunities to be enhanced by placement at one of the greatest IndyCar teams. And lo it has come to pass: Sato will share the #11 Chip Ganassi Racing-Honda with Formula 2 ace and IndyCar rookie Marcus Armstrong.

He joins a team with 14 IndyCar championships to its name, and with five Indianapolis 500 wins, including the most recent edition, thanks to Marcus Ericsson.

Sato has scored six IndyCar wins, but almost disproportionately, two have come in the 500 – in 2017 with Andretti Autosport and in 2020 with Rahal Letterman Lanigan Racing. On the latter occasion he beat Ganassi’s Scott Dixon with a late pass, and now he’s joining the team he memorably defeated on that occasion – the same team that has produced the fastest racecars for Indianapolis Motor Speedway over the past three years.

He admits that this time last year he could not imagine that the runout groove on his IndyCar driving career could include his best ever opportunities for victory. KV Racing was flaky, AJ Foyt Racing’s cars were only occasionally fast, Andretti Autosport was fast but flaky and he was there for only one year, while the form of RLL and Coyne over the past five years has been patchy.

Ganassi is a different level, a team you expect to see running in the top five and contending for victory at every race, whatever the type of track. Over the last few years, you could find many a full-timer who would trade 17 races with a middle-ranking team to run five races for Chip’s legendary squad. That sentiment shines through when speaking to its latest recruit. 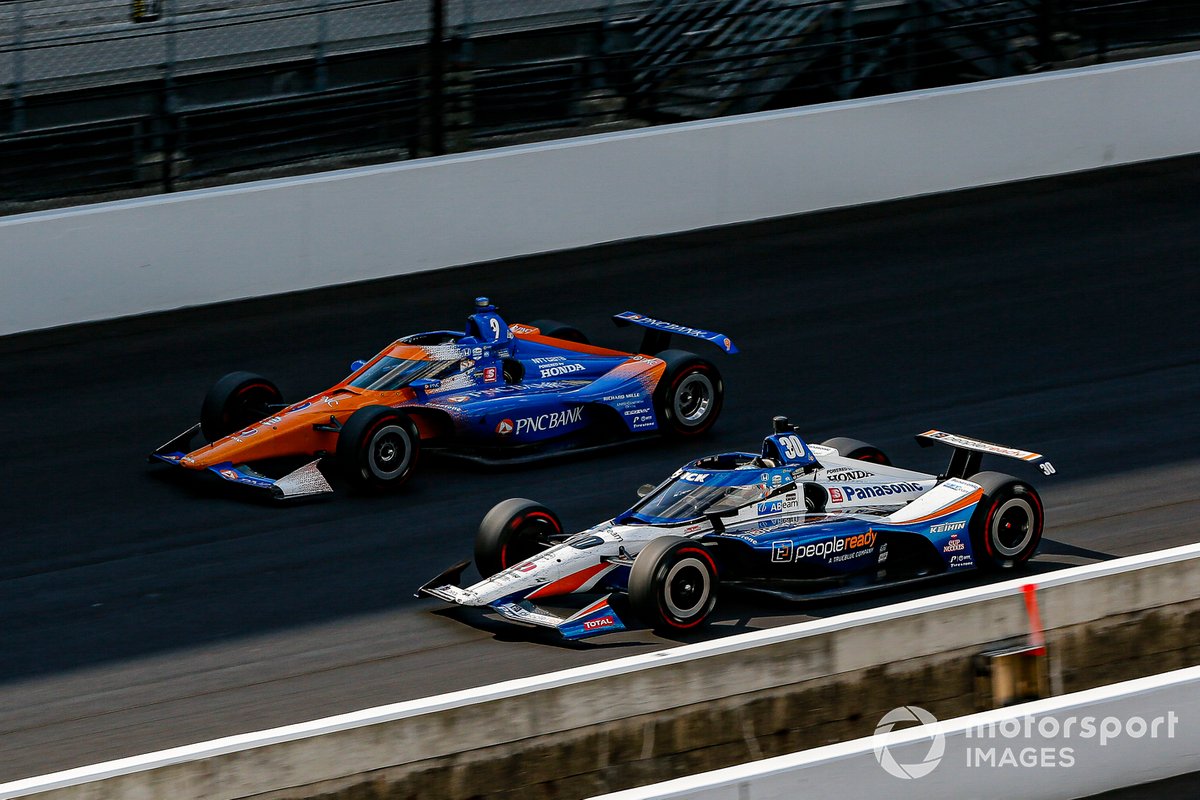 Sato tells Motorsport.com: “I am very grateful to Dale Coyne and the entire DCR team for a fantastic opportunity to work together in 2022. I was full of motivation and we did have some great races. But life is full of surprises, and a year later I had this incredible opportunity to join Chip Ganassi Racing.

“The shifting to the oval-only program is something I never imagined, but I was always prepared, as an athlete, a professional racecar driver, to put the steering wheel down. But before that, it was always my desire to compete at the highest level when I could. So this is an incredible opportunity for me to join such a team.

"You always want to win either the championship or the Indy 500 and physically, that’s a possibility to go for the Indy 500 with the best environment, the best team, the best teammates. So I am so excited and I must again thank Chip and Mike [Hull, managing director] for putting this together.”

Sato’s Lap 172 pass on Ganassi talisman Dixon in the 2020 Indy 500 turned out to be the winning move, as the then-RLL driver repelled attempts to retaliate by the six-time champion and 2008 Indy winner. And when Sato’s fuel level would have been perilously low in the closing stages having pitted for the final time a lap earlier than Dixon, he was saved by a caution period that froze the field on the run to the twin checkers.

Asked if he reckons his new employers have forgiven him for that defeat, Sato chuckles and is somewhat evasive in his answer.

“I always respected Chip Ganassi Racing – it’s always been my ultimate goal to beat them,” he says, “and it’s always been such tough competition. I have been with a big team – Andretti Autosport for example – and building up good opportunities with Rahal Letterman Lanigan Racing, and there was KV Racing at first, and the AJ Foyt Racing days… that was an unforgettable time, and it was a very similar scenario with Dale.

"But always you wanted to be with a team that was the best in the business, and Chip Ganassi Racing is top of the series all the time. I’ve never been in such an environment in all of my life, even in Formula 1.

“This just feels like a tremendous opportunity. It makes me really happy to join a team working together at the highest level.”

He’s not overstating Ganassi’s abilities. It’s unclear to outsiders how one team has found such a clear edge over the opposition at the Speedway, given that the basic DW12 is now at the end of its development, the universal aerokit is now six years old and even the aeroscreen has been present for three years. But it’s undeniable that Ganassi’s margin over the opposition, in terms of Indy 500 race pace, was greater in 2022 than it has been in any year since 2012, when Sato made his brave but doomed last-lap lunge to pass Dario Franchitti for the lead.

Last year, Ganassi’s rivals suffered a real psychological blow as they watched the track action in practice, observing how comfortable and settled the CGR cars looked in close proximity to other cars, and how they were fast in any conditions. Sato wants some of that, and now he’s in a position where he can get it.

“Their dominance was just incredible to see,” he agrees, “especially at the end of development of the DW12. It’s really interesting me to find out just what they are doing! And it’s not just the preparation of the car; it’s the organization of the entire team, the teamwork, the strategies, knowing the team pitcrews are in the gym every single morning preparing to give the best pit procedure as well.

“I’m like a boy with a new toy and I’m still unwrapping – what’s inside?! I’m just so excited. I know everyone is top-quality personnel and they are all working together to the ultimate goal of winning for Chip Ganassi Racing. And because I have different experiences, I hope I can help the team and make it stronger.”

While Ganassi has lost Tony Kanaan to the Arrow McLaren SP team, Sato’s arrival means that Chip will again tackle the 500 with three former winners on the roster. And unlike Kanaan in 2022, Sato is not in a one-off entry: the #11 team is full-time, meaning those staffing the car – led by race engineer Eric Cowdin – will be gelled and in synch by the Month of May.

Sato appreciates the difference, but points out that even if his car was an extra for the oval races, he would have faith in any crew that Ganassi put together.

“That is true and it is important, but when Tony was driving for Ganassi last year, there was nothing from outside the team where you could identify it was only a part-time deal,” he says. “That’s why Tony was able to finish third and could fight for the win. This team is always prepared and the people they employ always commit 100 percent. 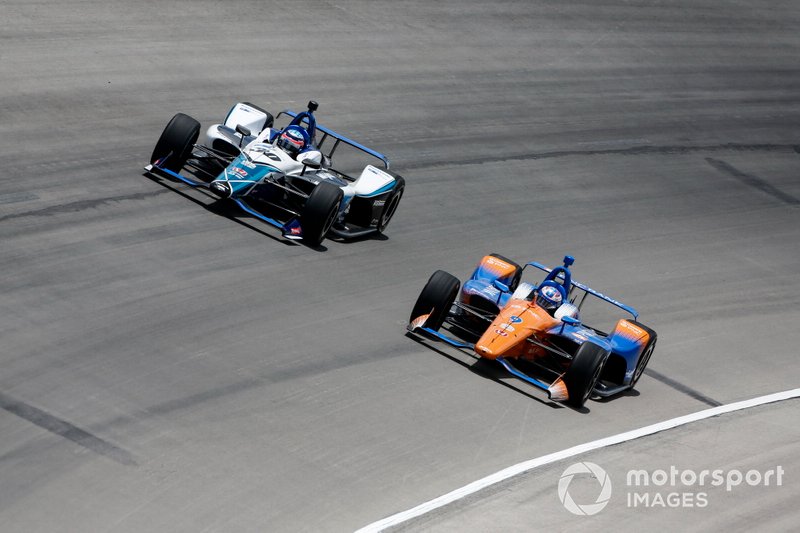 Trying to beat Ganassi has been Sato's modus operandi in years past. Now he'll be trying his best to send the team to Victory Lane.

“All the people working in the IndyCar paddock are tremendous; it’s how a team works together that makes the difference between the teams. I think the #11 car will be right on the pace from the beginning, and Marcus Armstrong has shown in Formula 2 that he is very talented. I will do anything I can to help him and the team.”

Sato is right, as usual, in that teamwork and truly productive interaction on race weekends can separate the great teams from the merely very good. But there’s also something magical about what goes on in the best teams between seasons – the collective genius of the engineers and data analysts is what allows teams to make significant strides even when the current car is supposed to be down to the last speck of development potential.

Sato acknowledges that he’s intrigued to see just how Ganassi sets up its cars to be so consistently strong.

“In terms of just pure speed, last year I don’t think Ganassi and Dale Coyne Racing were that different,” he recalls, “and that is why I was always interrupting the Ganassi train in practice, sometimes popping up in first or second or third. We could match their speed.

"But the environment changes, the track conditions change, the temperature changes, the wind direction changes, there’s different amounts of rubber down, it’s always challenging and the Ganassi cars and the team seemed to always be prepared, able to be fastest whatever the conditions. They had an A-plan, B-plan, C-plan, D-plan – they could always find something that worked – and that is crucial to being fast at the end of the race. That’s why I think they are so strong.

“How they do that, I don’t know. That’s something I hope to find out!”

He will – there are no secrets between engineers at Ganassi – and then… well, who would bet against Sato winning Indy or one of his other four IndyCar outings this year?