Three-time Supercars champion Scott McLaughlin says he’ll be “doing cartwheels, going crazy” if he finishes in the Top 10 on his IndyCar debut with Team Penske-Chevrolet. 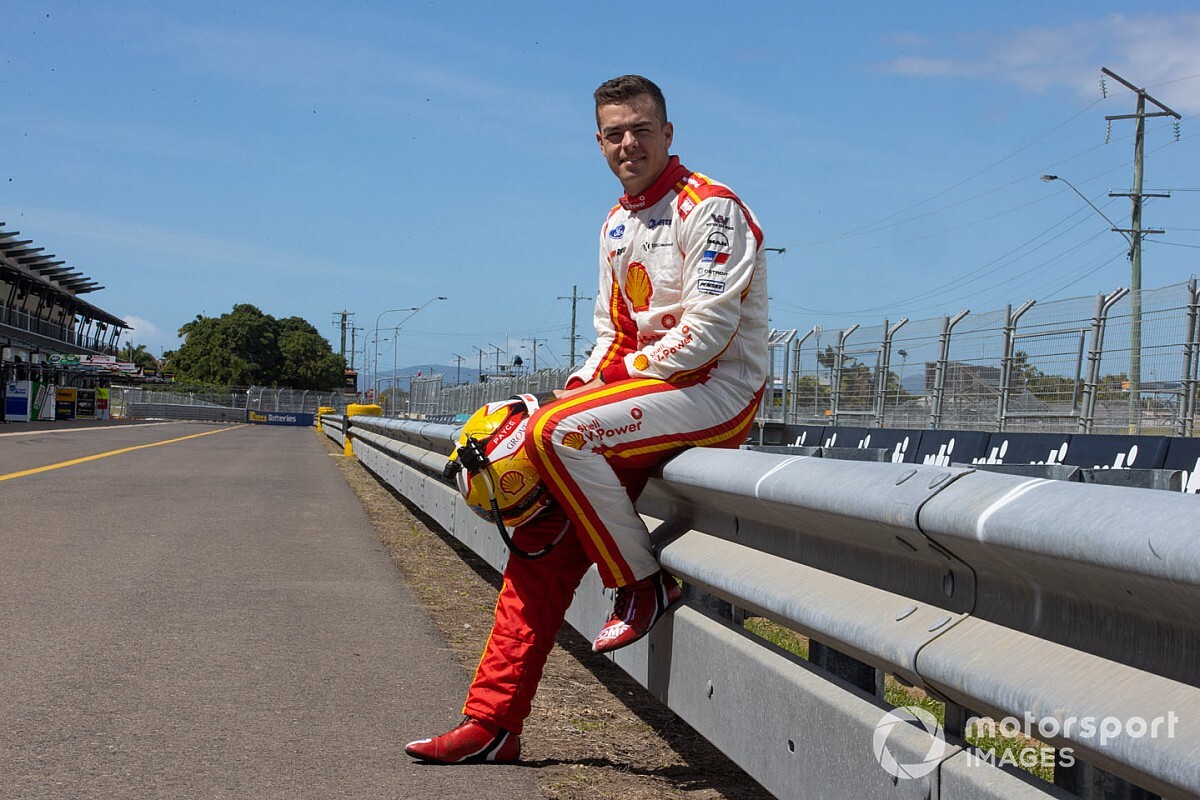 McLaughlin, who earlier this month wrapped up his third consecutive Supercars title with DJR Team Penske, was due to make his NTT IndyCar Series race debut on the Indianapolis Motor Speedway road course in May. However, the reshuffle of the IndyCar and Supercars schedules due to the coronavirus pandemic meant the first suitable date and venue became this weekend’s race at St. Petersburg – an event rearranged from mid-March as season-opener to the finale.

Although McLaughlin startled everyone with third fastest lap in IndyCar Spring Training at Circuit of The Americas back in February, he admits that the 1.8-mile street/runway layout in St. Petersburg will present a very different challenge.

“I’m very excited,” he said. “I think it's a great opportunity. I obviously never thought I'd get a chance this year due to the nature of the beast with COVID, all that sort of stuff.

“I've driven the car before, which gives me a little bit more confidence heading into St. Pete, that I sort of know what to expect from a car perspective. [But] never been on a street track in an IndyCar. I know it's very bumpy. The feeling inside the car with the bumps and stuff, it's going to be a lot different.

“I've got a lot to learn, but I'm excited for what's ahead…

“It's certainly been a transition that has happened pretty fast. I probably initially didn't think that Roger [Penske, team owner] and Tim [Cindric, team president] would think I'd be ready for an IndyCar, just because of my touring car roots, having a roof over my head. They put the proposition to me about a year and a half ago. I have haven't looked back since.

“I've always been interested it. I love the Indy 500, watch it all the time. Back in Australia it's a massive thing. The connection with Will [Power] and Scott [Dixon] Down Under is big. For me, it was always a cool thing to be a part of, but never thought I could be because I've been in a touring car for most of my career.”

Although McLaughlin tested initially at Sebring, then COTA and Texas Motor Speedway before the pandemic heavily restricted travel and threw the schedules into disarray, the 27-year-old New Zealander said he’s still been able to do some preparation. One part was working on his physique.

“I've been training a lot, I definitely lost some weight just to be a little bit lighter for the IndyCar,” he said. “Weight is obviously a big thing. All year my body clock is going crazy because I've been watching IndyCar in Australia at sort of 3am, 4am our time.”

He later added: “I was a bit fat for Supercars anyway. I needed to lose some weight regardless if it was an IndyCar deal or not. I worked pretty hard. I started a little diet, intermittent fasting. I really found a benefit out of that. For me, a lot of high-intensity training, weights, but high repetition. A lot of cardio.

“The IndyCar is very strenuous with no power steering, a few other things. That's the bit I had to learn, beef up my shoulders a bit more. I need to be competitive when I come here [and] for me to be competitive, I needed to get my weight down. I didn't want to be one of the heavier guys. I’m definitely still going to be because I've always been a bit bigger, but it’s definitely better than it was.”

Regarding preparation for competing in IndyCar, he’s avidly watched the races on TV for many years, and for the Indy 500, Penske hooked him up with the #3 team – running Helio Castroneves for the final time – so he could listen to the radio dialog. This team, including Jonathan Diuguid as race engineer and Jon Bouslog as strategist, will be running McLaughlin’s #3 Shell car this weekend.

“It's been good to get to know how some guys race, how the teams work, how the pit stops and the cautions work, just little things you can pick up with the coverage,” said McLaughlin. “The coverage that NBC does is amazing, the way that IndyCar gets it to Australia is so cool. I've been able to really enjoy that part.

“From a driving perspective, at the Indy 500 I was listening in to Helio’s radio. They are my crew guys, the #3 car. They are all of my pit crew, my engineers. It was nice to have an idea and an introduction to how everyone talks and gets through the race weekend. That was a cool, cool thing for me to understand, not only how they talk to each other, but also understand the race more.

“I think I've watched the Indy 500 for a long time, but probably haven't gone behind the scenes like that – fuel codes, lots of stuff. Still got a lot to learn, but it was a nice introduction.”

The schedule from racing Bathurst 1000 last weekend to arriving at St. Pete for his IndyCar debut has been less than ideal, but McLaughlin said he had caught up on his sleep over the past couple days.

“It's been pretty wild,” he admitted. “I did the race on Sunday in Australia – Saturday your time. I basically jumped on a plane straightaway. Bathurst is about two hours west of Sydney. I flew quickly to Sydney, spent the night in Sydney, then flew 10.30am Monday morning to California, then California to Charlotte. That was Monday night.

“I went straight to the simulator that night. I did basically a four- or five-hour session on the simulator. It was probably the best thing for my jet lag! I feel amazing now because I stayed up.

“Went back to the simulator on Tuesday, plus seeing the guys, a little bit of a seat fit here and there. The last couple days, Wednesday and Thursday, it's just been seeing everyone, getting acquainted with the team a bit more. Everyone has sort of taken a couple days off before St. Pete. Myself and my wife, we've sort of just been having a look around, hanging out, staying safe. Now we head to St. Pete tonight.”

Regarding expectations for the weekend, McLaughlin sounded profoundly cautious, despite the pace he showed at COTA – a performance he chose to play down.

“[This weekend] I just want to do every lap I can, do every pit stop I can,” he said. “It's a massive learning thing. I'll go there, I'll drive the car as fast as I can within my comfort level – but my comfort level will be a lot lower than some. I'm fully expecting this will be the toughest challenge of my career, but I'm looking forward to it.

“I think it's an opportunity to learn and understand what goes into it. COTA was good in some ways where I understood the car, I understood how to get some time out of the racecar. [But] when you're doing one lap by yourself, it's a lot easier than when you're put with 23 other drivers heading down to Turn 1! I'm fully expecting a new challenge when I get into the racing side of things with in- and out-laps, pit stops, all that sort of stuff.”

Title contender and Penske teammate Josef Newgarden said on Wednesday that McLaughlin is “a great racer, doesn’t matter what car you put him in,” but acknowledged the Kiwi had a tough task ahead of him this weekend.

When this opinion was put to McLaughlin, he chuckled: “I think if I finish top 10, I'll be doing cartwheels, going crazy!”

He later added: “I'm fully expecting a tough battle. I might have a great, great experience while running last. I don't know. It's not going to change how I feel or whatever. I've got a lot to learn. I'm fully expecting I could be last.

McLaughlin will be in relatively unfamiliar territory for Team Penske, too, for it’s exceedingly rare for Roger Penske to run a true rookie. Jan Magnussen made his first IndyCar start driving for Team Penske in 1995 but had Formula 1 and Formula 3 experience beforehand. Paul Tracy had made just one previous IndyCar start when he got his big chance in 1992. But before that, Mark Donohue, entering Indy car racing with what was then known as Penske Racing in 1968, who was the last category debutant to race for The Captain.

Asked if that privileged status and high expectations from colleagues and peers added stress ahead of this weekend, McLaughlin replied: “I think I'd be lying if I said I wasn't feeling some pressure, but it's probably from myself more than anything.

“I'm pretty hard on myself in regards to where I'm at, even on the simulator. I was a little bit slower than the guys [teammates Newgarden, Will Power, Simon Pagenaud]. Most people would be pretty happy with where I was, but I wasn't. I wanted to be closer than I was, which wasn't far.

“Yeah, there's probably… I wouldn't say ‘intimidation’ but there's an unknown there. I'm excited to see how I fare in a racing situation because I haven't had that before. Like I said, it's going to be a lot different.

“But I trust my ability. I trust what I can do in a racecar. I trust the process that Team Penske have put me on. I wouldn't be here if I didn't think I was ready and they wanted me to do it. That already gives me a lot of confidence in the process.”