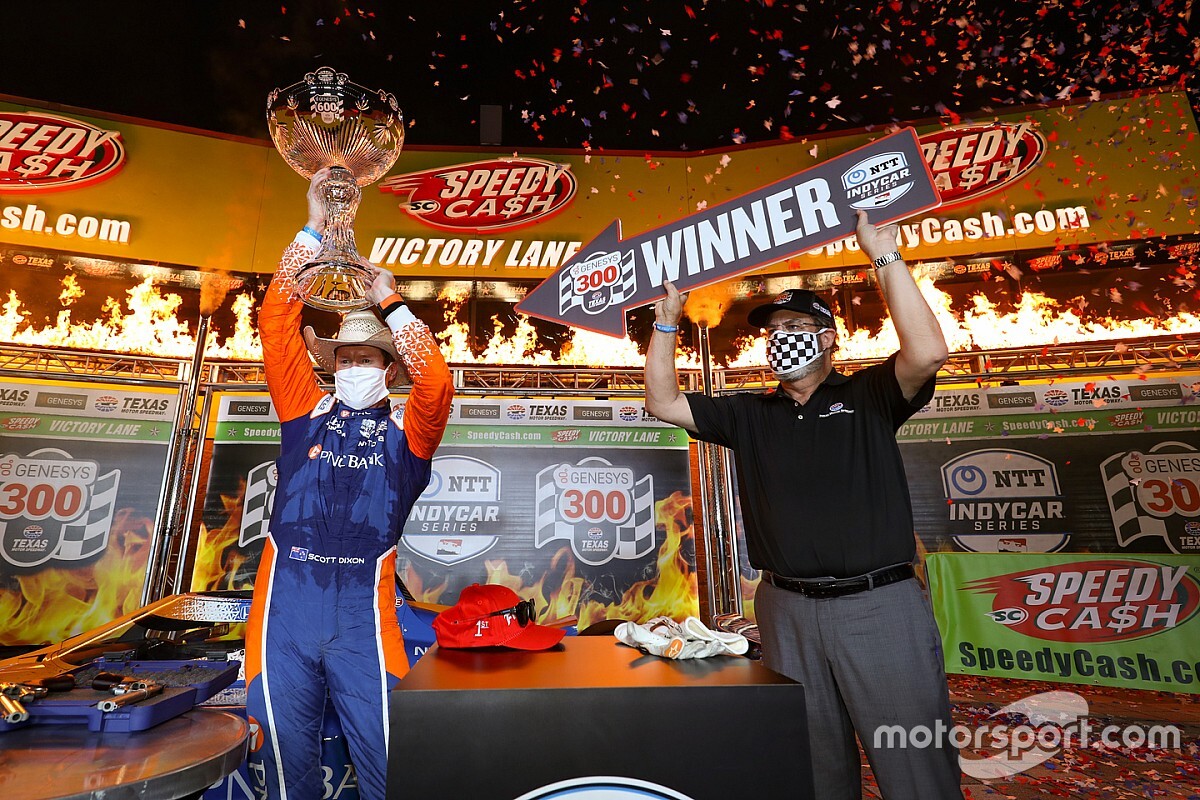 Scott Dixon credits the Chip Ganassi Racing team’s simulator work with Honda for his dominant performance at Texas Motor Speedway, that produced his 47th career win and fourth at TMS.

Although he was narrowly beaten to pole for the Genesys 300 by Team Penske-Chevrolet’s Josef Newgarden and spent most of the first stint behind the defending champion, Dixon set a scorching pace as soon as he hit the front. Only a slight miscue on pitlane and an impressive drive from teammate Felix Rosenqvist threatened to throw his victory run off the rails.

“The DIL, the simulator with Honda that we've been using for the last three weeks in preparation for Texas, has been really good,” said the five-time IndyCar champion. “Lots of things we didn't think we would try or have the time to try on track, we were able to kind of do that. Gave us some ideas. We were able to sort of verify them once we got here.

“We worked pretty hard on trying to calm the entry and exits, especially of Turns 1 and 2, from last year. That's what got really tricky. I think [Colton] Herta last year was really good. He was able to sit a little bit high, arc that corner a lot more than we were able to.

“[So] we worked on that a lot in the simulator. We found some things that kind of seemed to work. You never know if that's going to work in real life.

“As we rolled off, it did straightaway. The car felt really secure. Some of those areas going into Turn 1 later on older tires, definitely for me I couldn't do it. The car was still very loose. Seeing that some others were pretty strong there when we were getting to race pretty tight. When the tires were fairly new, outside moves, it was a lot of fun.”

Over the winter, Dixon’s former race engineer Chris Simmons has become Chip Ganassi Racing’s competition manager, and Michael Cannon was drafted in from Dale Coyne Racing as his replacement. In addition, Ganassi was able to integrate some of his former IMSA/WEC sportscar staff into the IndyCar team as it grew to three cars with the arrival of Marcus Ericsson.

Dixon commented: “The car rolled off really well. I know we'd been working extremely hard on just trying to fix some of the issues we had last year. We have some new people, plus a ton coming back over from the GT program. The engineering depth and everything got a lot stronger, so development was good through the winter.

“The PNC Bank #9 car was strong all night. We had a couple little issues in the pit stop there. I don't know if I went long. We had a bit of a bobble and I went from first back to third. The car just had some really good speed. It was just nice to drive in traffic. Never really had to push too hard. Just trying to make sure we could stay ahead of the rest of them.

“Not often you get a car like that. Just very thankful to have that. The team gave me an amazing car. It was a fun night for us on the #9. It's great to be back in the car after such a long break, to do it like that.”

Dixon also alluded to the fact that he felt the series had overreacted to the ‘unknown’ of the 2019 tires on cars with a new center of gravity, when it imposed a stint limit of 35 laps per set.

“Got to give a big shout out to Firestone, too,” he said. “I know everybody was a little bit worried coming here on a tire that was a bit unknown. The thing was fantastic. I think we could have gone 65 laps! They just kept on producing. I could still at the end of a stint run 210s, 211s. Thanks to them.”