Four-time Indy 500 winner Helio Castroneves says coming face to face with William Behrends’ sculpture of his face for the Borg-Warner Trophy was “like meeting my twin brother.”

Like all the effigies on the legendary 5ft 4.75in, 110lb trophy (bar Tony Hulman’s one in gold), Castroneves image will be cast in sterling silver as he joins A.J. Foyt, the late Al Unser and Rick Mears as the only drivers with four faces on the trophy commemorating each year’s Indy 500 winner.

Behrends has crafted every bas-relief image on the Borg-Warner since 1990, but it was only in 2015 that he started inviting each winner to his studio in Tryon, N.C., feeling that the presence of the driver gave him more to work with than two-dimensional photos. 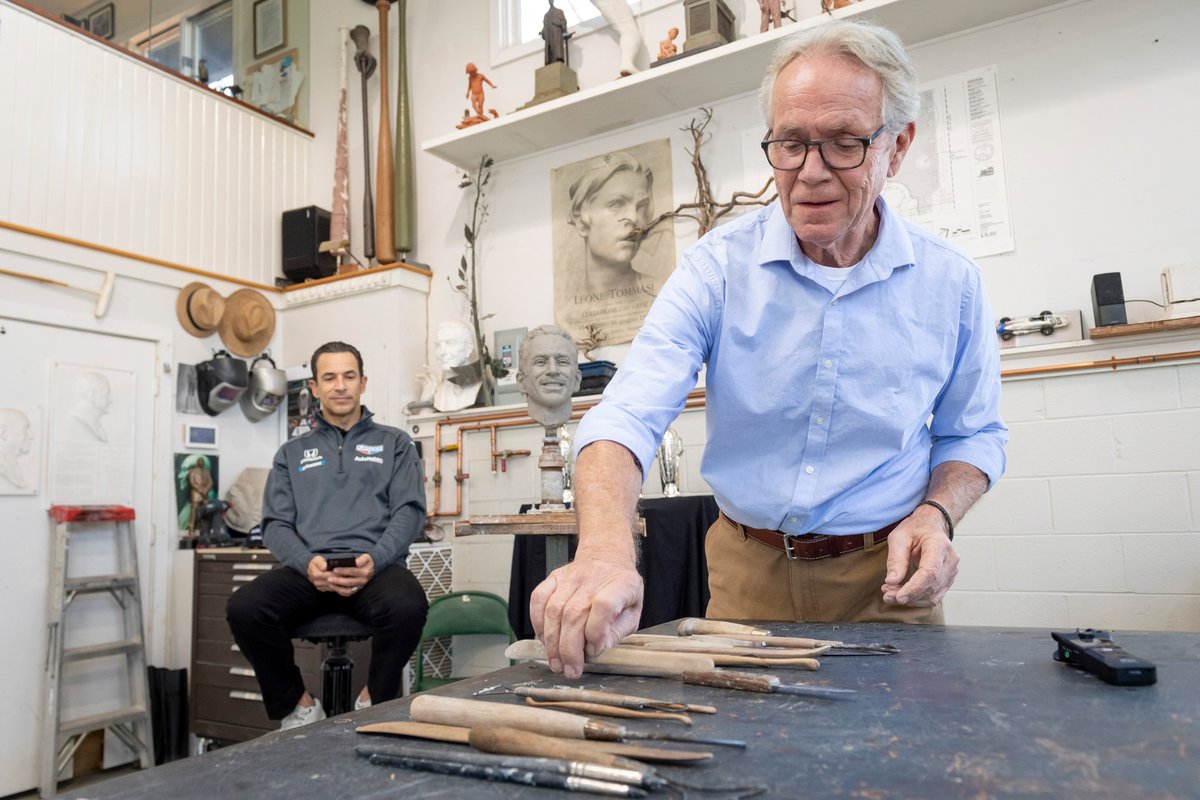 Thus despite him having come up with three Castroneves faces already, this was the pair’s first ‘combined’ effort.

“It was very, very interesting seeing the clay model,” said the 46-year-old Brazilian. “William did an amazing job. When we did a picture of me looking into the face of the model, it was like meeting my twin brother! It was soooo weird, but fantastic.

“What an incredible artist William is. He had done the model from photographs, but I spent a couple of hours sitting there while he kept working on it, making little adjustments, moving and changing things. He’s takes a lot of care trying to get it just right.”

For Behrends, the experience of meeting Castroneves was memorable.

“I didn’t really know Helio – just from meet-and-greets – so I didn’t know if I’d like the guy,” said Behrends, “but he was just great. He drove up from Atlanta, a three-hour drive, and he was very engaging. Probably chatted for a couple of hours, and it was great to get to know him, and have that time to do adjust the clay study. It really helped. I wish we’d had some chain-link fences for him to climb! But no, seriously, he was very calm but enthusiastic and helpful.

“He was amazed when he first arrived and saw what I’d done from the photos, but I was looking at him and immediately identifying the things I wanted to change. It’s very hard to create something three-dimensional based on two-dimensional images. There’s no substitute for having the person there in front of you, in the flesh.”

Behrends said there were no obvious signs of ageing in a driver who was just 26 when he first had his face added to the Borg-Warner Trophy. 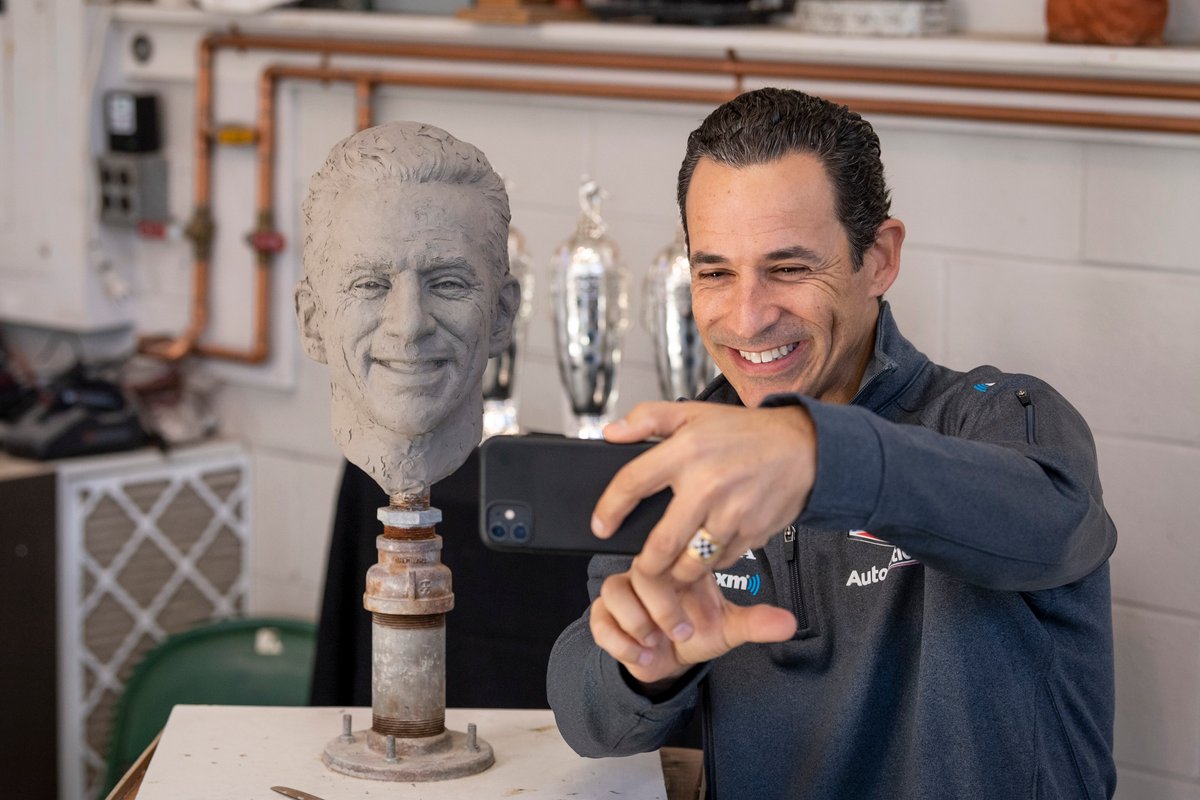 He observed: “I heard Helio was concerned about his hairline receding, but I don’t think it’s receded much at all. He’s got a good head of hair, even though it’s shorter than it was in the first couple of years I sculpted him. The last 20 years have been good to him.”

For Castroneves, the event was another happy mini trip back in time to the day he joined the Speedway’s elite in the history books after a 12-year wait between third and fourth wins.

“I have become used to the idea after six months, and I’m thinking about the work we have to do for next year, improvements to make. But when I have things like this sculpting, I do allow myself to start thinking back to May. Like the other day I was revealing the Indy 500 ticket for 2022, and every time I do things like that, or posing with the four Baby Borgs – I don’t have a long arm so it was difficult! – I start going back to Cloud Nine. You start to realize how awesome it is, what a big deal it is.”

A second casting of the same effigy will be added to Castroneves’ fourth ‘Baby Borg’, the miniature Borg-Warner that has been awarded to each Indy 500 winner since 1988. 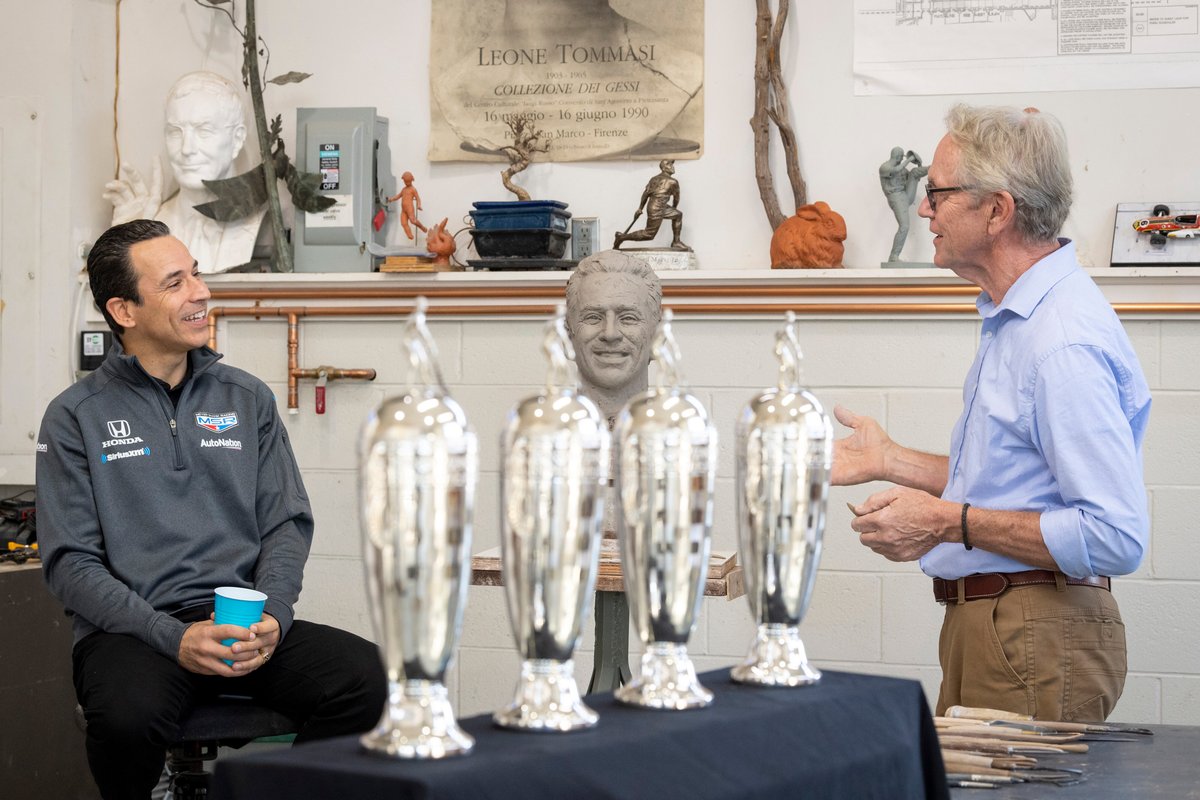 Castroneves, who scored the win in his first race with Meyer Shank Racing, admits that the result far exceeded the expectations he had after his initial exploratory laps in the #06 MSR-Honda.

“I’ll be honest, I didn’t immediately think we had a winning car,” says Castroneves, “not the very first test. I thought, ‘What the heck am I doing here?!’ The car was just so loose. When we had our meeting between Meyer Shank Racing and Andretti Autosport, I know they were thinking, ‘OK, is this guy for real? To just come into the team and say these things are not so good…’”

One side-effect of this early daunting first encounter with MSR was that Castroneves learned what it was like for the regular ‘arrive-’n’-drive’ racers in the Indy 500’s one-off entries.

“All those people who race an IndyCar only once a year, at Indy – our fastest track! – I have a lot more respect and understanding of what they go through. I’m able to use my experience that I’ve built from my first year in IndyCar, 1999, but some of these drivers only have a few races to build some knowledge of what they need from the cars at Indy.

“Anyway, once I started working with Meyer Shank and Andretti, we made some improvements– and fortunately there was no rain so we could be on track as much as we wanted. We were still struggling for race setup because we’d focused a lot on qualifying, and that was OK, we started eighth.

Then on the Sunday practice after qualifying, we got our heads around the race setup and I said yes, the car is in a good spot, and on Carburetion Day on the next Friday I knew exactly what we had.”

Whether what he and the MSR team had was going to be enough to take on the Ganassi cars of pole-winner Scott Dixon, Tony Kanaan, Alex Palou and Marcus Ericsson – all of whom were in the front three rows – was still more open to question.

“I believe Scott had the odds in his favor,” agrees Castroneves, “everyone was betting on him, but I remember saying to someone, ‘He’s not going to win the race.’ Everything was happening too perfectly for the #9 crew. He’d go out on the track in practice and boom, he’d be on top or near the top in just a few laps. I didn’t know he was going to have a particular issue, but I predicted something would stop him winning. No one just continuously has great days at the Speedway in the Month of May. There’s always at least one session where you’re slow, when the track reminds you that it is in control and cannot be totally understood. And like they say, the Speedway picks the winner of the 500 and this time it decided that this was not going to be Scott’s year…

“But all the Ganassi cars were fast and so I ended up having my battle with Palou. I have to say, he was driving very well. For someone in only his second 500, I thought he was doing a really nice job, doing everything right. His only problem was that he didn’t know what I had, but I knew what he had. I had learned before from battling with Ryan Hunter-Reay [2014 Indy 500] not to show everything too soon. So when Alex was ahead of me, I was just waiting for the right opportunity to pass and stay there, and that’s what happened, by using the backmarkers ahead of us in the right way, getting a tow but not losing downforce in their dirty air.”

This perfect start to his six-race deal with MSR led directly to team owners Jim Meyer and Michael Shank offering Castroneves a full-time ride for 2022, and he’s looking forward to it – especially given that his teammate will be former teammate and fellow Penske exile Simon Pagenaud.

“He will be very helpful to me, I am sure of that,” says Castroneves. “Yeah, Simon is another Indy winner, but Indy is something I can deal with. That’s one race I don’t need him for! The other races, we will be working very closely together to push MSR to the front, to reach the next level.” 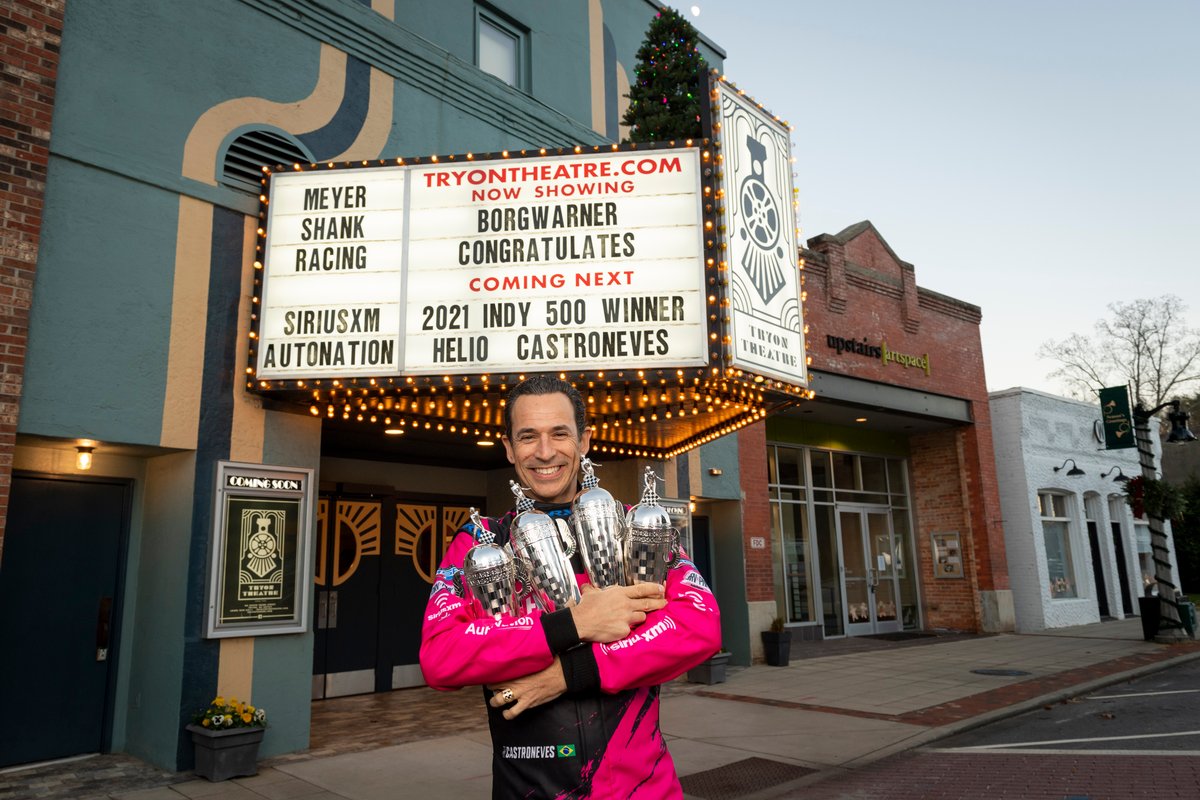 Helio with four 'Baby Borgs' outside the theater in Tryon, N.C..