Rossi thrilled by IndyCar at Circuit of The Americas 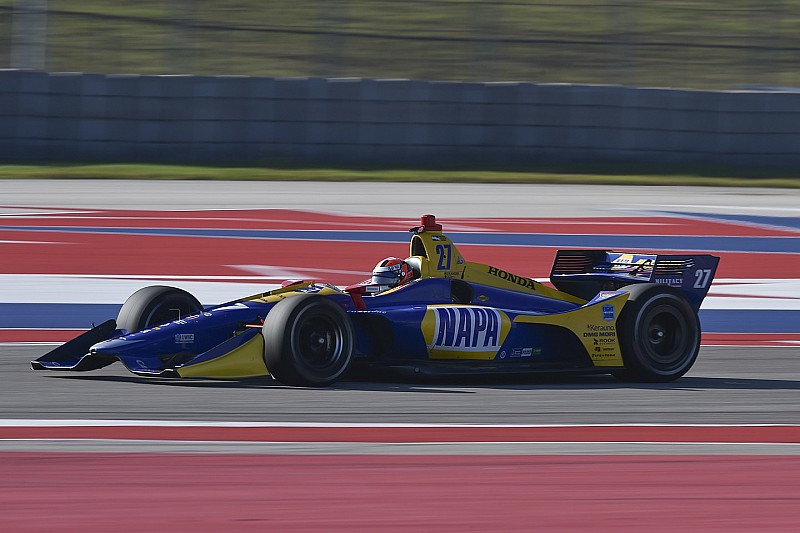 Alexander Rossi described his test for Firestone at COTA as “fantastic” and is convinced the IndyCar Series has made the right decision to race in Austin.

The Andretti Autosport-Honda driver joined Tony Kanaan of AJ Foyt Racing-Chevrolet and an unnamed Carlin Racing-Chevrolet driver for the test at the 20-turn 3.426-mile facility in Austin, TX., and completed 90 laps.

Rossi was testing a variety of tire compounds and also turbo boost levels, and both he and the teams have agreed with IndyCar to not disclose lap times.

“With the various programs Tony and I were doing, it was hard to tell where we were at comparatively,” Rossi told Motorsport.com. “But I can tell you that our car around that track is awesome! I had a smile on my face for the entire 90 laps and the package is great.

“It’s challenging, it’s technical, but there’s also a lot of high-speed corners. It’s a perfect circuit for us.

“From Turn 1 to Turn 9 is just mega. The first bit of it is pretty close to flat and each one subsequently gets tighter so you kind of decelerate as you go through them and if you’re a little bit off on the first one, you pay a big penalty six corners later! So it’s definitely a drivers’ track.”

Rossi, who finished runner-up in this year’s IndyCar championship, wasn’t able to draw comparisons with his Formula 1 experience at COTA.

“In 2015 in the Marussia, the whole time it was wet!” he recalled of the weekend in which he eventually finished 12th, “and in 2013 driving for Caterham as test driver I did one free practice in the dry. But I honestly don’t remember too much about that.”

Rossi said today’s test was primarily focused on providing information to Firestone, so he did not, for example, try drafting the other two cars nor push-to-pass boost.

“I literally didn’t see the other two all day when I was out on track,” he said. “Firestone wanted data and feedback on the tires on a variety of length of runs, so they didn’t want external influences, in order to get a true comparison between compounds.

“We weren’t really told [by HPD engineers] what the deal was with the extra boost, but there wasn’t a time when we changed a setting and suddenly found a huge bunch of laptime. It was active the whole time, didn’t use push to pass.

“Anyway, it was just good to get out on track – and that track in particular. Austin, COTA is a strong addition to the IndyCar schedule, and I think we’ll put on a good show for the fans, I really do.”

Trevor Carlin, owner of Carlin Racing, agreed with Rossi saying, "It's a fantastic track for IndyCar, a great place to be."

While he would not reveal who was testing his car today, he did confirm to Motorsport.com that it was for a prospective full-time third entry, and that Charlie Kimball's contract for returning to the squad alongside Max Chilton is "all but done."