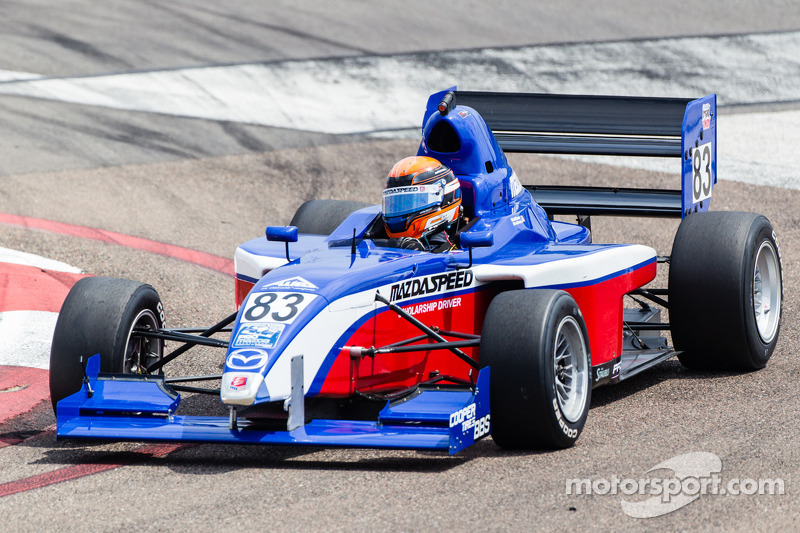 Christopher DeHrade recaps the action from Houston when the Pro Mazda drivers took on the street course.

Race one for Star Mazda started with Garett Grist on pole over Spencer Pigot, but Pigot got the lead heading to the first corner. Though the race started dry, it ended up wet after a few laps into the race.

Scott Hargrove got into his teammate on the second lap of the race and got a drive-through penalty, but after that the race was on to the pits to take on wet tires. For some unknown reason, Pigot and Kyle Kaiser remained on track as everyone behind them took on wet tires.

“That kind of saved me,” Hargrove said about Pigot’s poor strategy.

That decision would have serious championship implications once the race was over. The race had three caution periods, but even with the field bunched up, Pigot, the points leader going into the race, could not recover and finished 8th after Hargrove managed to come up with an inspired drive to win the first race of the weekend over Nicholas Costa and Dalton Kellett. Hargrove

“Once you’re inside, you can just back it down and focus on the exits and it wasn’t too hairy, but to keep them behind me was where things got a little sketchy, I was really pushing really hard, missed a few apexes and got close to the tires a few times.”

Polesitter Grist ended up sixth after not having a perfect setup.

“I was having some trouble here and there making adjustments, but tomorrow we start on pole again, so I'm looking forward to using what I learned today and applying it for race two,” Grist said.

The points were shaken up as Pigot, who won the first four races of the year, moved to second behind Hargrove, 207-194. Hargrove had been on a run, winning the two races at the Indianapolis Motor Speedway road course and finishing second at Lucas Oil Raceway. Costa managed to get to a three way tie for 8th in the points after an interesting race.

“The race was pretty crazy all the way, I didn’t know what to expect. The grip level was changing all the time, it was getting drier then getting wetter again, so it was really a matter of keeping the car on track and not to do anything stupid, so in the end we had a great result,” Costa said.

“Same thing as what we went into this race, it’s halfway through the season so we’re just racing like it’s a new championship, go on and win as many races as possible, and maybe later in the year we can think about a points gap, but we’ve got a lot of work to do there,” Hargrove said.

Race two, however, was a different story.

Grist may have started on pole, but Pigot was able to get past him on the inside heading to the first turn. Chaos then ensued.

Scott Hargrove and Felipe Donato’s races would be over after collisions rendered their cars too damaged to continue after they completed zero and one lap, respectively.

“I got a really good start, went into turn one, was battling with Garett [Grist] through turn 1, but then we both ended up boarding and going through the cut through for the chicane and then going down into turn 3 I had a really really good run, went down to the inside, everything seemed normal, it was going to be a normal pass and then I guess he just turned into me,” Hargrove said.

“I was in the braking zone and then he launched over me, so I don’t know, we’ll watch the video and see what happened, but I was just turning in and just all I saw was his car flying over me,” Grist said.

Grist was assessed a drive-through penalty but fought his way through the field to finish ninth, but it wasn’t enough as Spencer Pigot dominated to win race number two.