DAYTONA BEACH, Fla. – The annual three-day test session for the 52nd anniversary of the Rolex 24 At Daytona on Jan. 25-26 – known as the Roar Before The Rolex 24 – wrapped up on Sunday afternoon.

More than 100 cars between the IMSA TUDOR United SportsCar Championship and the IMSA Continental SportsCar Challenge have been turning laps around Daytona International Speedway’s 3.56-mile road course for the past three days as they prepare for their respective season-opening events. 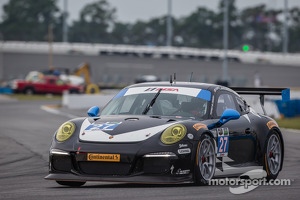 In GTLM, the No. 911 Porsche North America 911 RSR, wheeled by Nick Tandy, posted the fastest lap of the class Friday afternoon with a speed of 121.405 mph. In the same session, Spencer Pumpelly drove the No. 45 Flying Lizard Motorsports Audi R8 LMS to a top speed of 118.688 mph in GTD.

Dempsey, who stars in the ABC hit drama “Grey’s Anatomy,” will drive the No. 27 Porsche 911 GT America with Joe Foster, Marc Lieb and Andrew Davis. In the team’s sister car, the No. 28, Klaus Bachler, Christian Engelhart, Rolf Ineichen, Lane Willsey and Franz Konrad will be behind the wheel.

Dempsey Racing has delivered some strong finishes in the Rolex 24 including a third-place podium finish in the GT class in the 2011 Rolex 24.

“It’s great to be back in Daytona, we missed it last year,” said Dempsey, who will co-drive the full TUDOR United SportsCar Championship season with Davis. “We’ve had a lot of great memories here and hopefully we continue to in the future.”

“I want to win and I think we have a really great opportunity this year with the lineup we have,” Dempsey said. “To win this year with the merger and the quality of drivers and the competition that is in the field … I think if we have our first win, this would be the most satisfying. I think it would be a turning point for the team and myself.”

Shank Racing unveils lineup: Owner Michael Shank unveiled his driver lineup on Saturday during the Roar Before The Rolex 24 and they were all familiar faces.

Shank Racing will bring back the same driver’s lineup that drove the team to victory in the 50th anniversary of the Rolex 24 in 2012. Ozz Negri, John Pew, AJ Allmendinger and Justin Wilson will drive the No. 60 Ford Riley. Pew and Negri will share the full-season driving duties

“We just have a great time,” Allmendinger said. “To be able to win the race two years ago with the group of guys was just something that was so special and for me one of the highlights of my career. It makes you want more.”