15th place in his first race together with Patrick Dempsey.

A change of team in the last second, a strong first part of the race and a 45-minute pit-stop to repair the car. The legendary 12 Hours of Sebring had many incidents for Norbert Siedler. With his new team-mates Patrick Dempsey, Andrew Davis and Joe Foster he finished 15th – the maximum after an unplanned change of the steering rack. 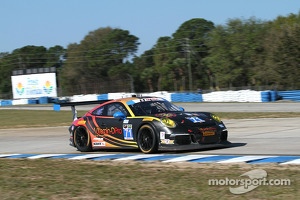 After position 13 in qualifying the first part of the race went really well for Norbert Siedler and his three American team-mates. Andrew Davis was behind the wheel for the first laps of the race and was able to improve the Porsche 911 GT America continuously up to the fifth place. “He did a great job, but suddenly we lost hydraulic oil in the steering system,” explained the race driver from Tirol. In the next few hours it was possible to refill the oil, but finally a change of the steering system was inevitable.

The unintended pit-stop cost the fast quartet nearly 50 minutes – any chance for a great result was gone. After Dempsey's and Foster's turn Norbert Siedler did the last part of the race. “My stint was quite okay, we only had some problems with the brake,” he reported afterwards. “The change of the steering unit had cost us a lot of time before anyway.” After twelve hours he crossed the finish line on position 15. “What a shame – without the problems a much better result would have been possible,” was his conclusion.

From opponents to team-mates – Norbert Siedler and Patrick Dempsey

Originally Norbert Siedler was at Sebring to steer the black and red Park Place Motorsports Porsche which he had already raced in Daytona. But shortly before the first practice the team was forced to withdraw the car from the race. Only a few hours before the race the Austrian did not have a cockpit. His fellow countryman Franz Konrad used the opportunity and signed Siedler for the team Dempsey Racing, which is supported by Konrad Motorsport.

“I would like to say thank you to Dempsey Racing for the short-term engagement,” Norbert Siedler said happily. “The atmosphere was great and the team did not have any influence on our technical problems. The squad has done a really good job.” A few weeks after the race in Daytona the 31-year-old was behind the wheel of exactly that car which he had chased in the last minutes of the previous race and overtook right before the end. With Patrick Dempsey he suddenly had an extremely famous team-mate. The actor, who is well known for his role in “Grey's Anatomy”, is also permanently seen in German and Austrian TV. “Although he is such a world-star, Patrick was really likeable. It was lot of fun to work together with him and his team. Maybe there will be additional collaborations in the further course of this season.”

After the American races in Daytona and Sebring also the European season is just about to start. In about two weeks’ time the first race of the VLN Endurance Championship is held at the Nürburgring-Nordschleife. In this year Norbert Siedler will drive a Porsche 911 GT3 R for the German squad Haribo Racing. “I am really happy that the races on the most spectacular race track of the world will start again,” he shows his euphoria. The season highlight, the ADAC 24 Hours Nürburgring take place from the June 19th to 22nd.