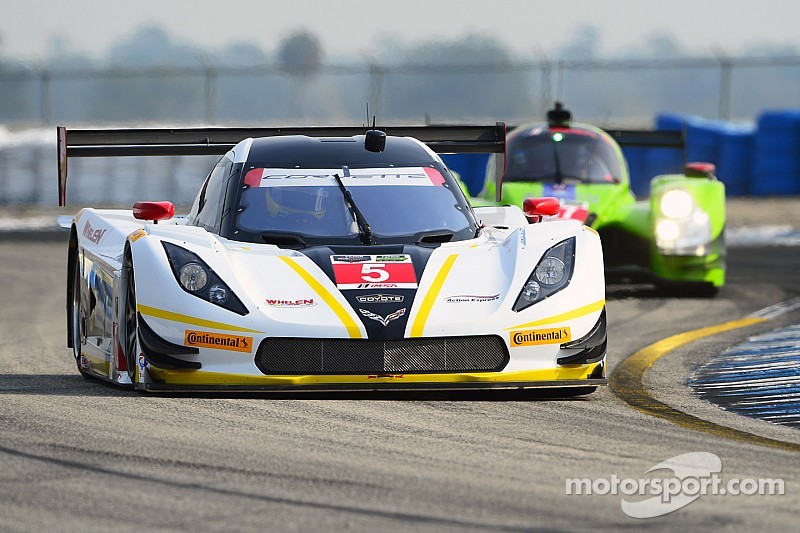 João Barbosa wasted no time in taking the Mustang Sampling NO. 5 Corvette Daytona Prototype to the top of the charts on Thursday morning.

SEBRING, Fla. - While one practice session doesn't win you the Mobil 1 Twelve Hours of Sebring Fueled by Fresh From Florida, posting the fastest time in the first session certainly sets a positive tone for the weekend.

Porto, Portugal's João Barbosa wasted no time in taking the Mustang Sampling NO. 5 Corvette Daytona Prototype to the top of the charts on Thursday morning.

Barbosa, ever the pragmatist, "In the first session its most important to have a reliable car. We have to really pay attention to how the track changes and make sure we are keeping the car going in the right direction. Right now we have a fast car and I feel like we have a great race pace."

The lap of 1:52.485 was only a half second off the pole speed set by Barbosa's teammate Sébastien Bourdais in last season's installment of the oldest sports car race in the United States. The second fastest time in the session was a 1:53.732 by Oswald Negri. Bourdais also took a stint behind the wheel in the second half of the first session.

Meanwhile, teammates Dane Cameron and Max Papis shared the responsibilities behind the wheel of the NO. 31 Whelen/Team Fox Corvette DP in the session recording the fifth fastest time of the session.

"We've been out of the car for six weeks so its nice to get back in and get comfortable again," said Dane Cameron. "The car feels good overall, we've got some small adjustments to make and I think we're going to be solid. It's the first practice so we will see as the day goes on how we progress."

The second session in preparation for the Mobil 1 Twelve Hours of Sebring starts at 2:25 PM.