The No. 5 Action Express Racing Corvette DP of João Barbosa, Christian Fittipaldi and Sebastien Bourdais. Fittipaldi posted the quickest lap of the test

Daytona Beach, Fla. – Action Express Racing completed a successful three-day test at the annual ‘Roar Before the 24’ over the weekend as the team took its first official laps of the IMSA TUDOR United SportsCar Championship at Daytona International Speedway in preparation for the 52nd running of the Rolex 24 At Daytona at the end of the month.

The team’s hard work during the off season was on full display as the group was quickly up to speed with the No. 5 Action Express Racing Corvette DP of João Barbosa, Christian Fittipaldi and Sebastien Bourdais. Fittipaldi posted the quickest lap of the test with a time of 1:38.630-seconds during Friday’s testing. 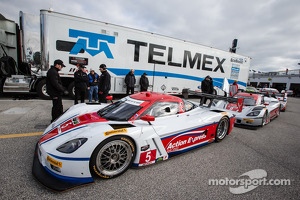 Burt and Brian Frisselle teamed with Delta-ADR drivers Fabien Giroix, Stefan Johansson and John Martin in the No. 9 Action Express Racing/Millennium Corvette DP, with the effort logging the fifth quickest time of the test with a quick lap time of 1:39.343-seconds. The five drivers are competing as part of the combined effort of Action Express Racing and Great Britain-based Delta-ADR for the historic 24-hour classic.

“It’s been a great test,” offered Team Owner Bob Johnson. “We feel great. I think we learned a lot every session and that is what we came to do. We wanted to learn a lot and get better and build on our endurance strategy and make sure all of the equipment is working as we want it to for the 24 hours. The speed is great, but that isn't the main objective. We want to be there at the end of the 24 hours.”

Both of the Action Express Racing Corvette Daytona Prototype entries logged plenty of laps around the 3.56-mile ‘roval’ course during the allotted eight test sessions and collected valuable data for the rigorous 24-hour endurance event. Vastly different weather conditions throughout the weekend - which saw cold and blustery weather on Friday and then warm and sunny weather on Sunday – allowed the team to simulate the changing weather conditions that often come into play during 24 hours of running.

“We are really happy with the progress Action Express has made in the off-season and how we have switched over to 'racing mode',” said Team Manager Gary Nelson. “We got a chance to run a lot of different ideas and different setups. So now we will go home and put it all together and come back in a couple of weeks.”

Action Express Racing will return to the ‘World Center of Racing’ for the 52nd running of the Rolex 24 At Daytona on January 23-26.

Christian Fittipaldi, No. 5 Corvette DP: "It was great to be on top of the time sheets. All in all I think we have a solid team and a solid group of guys driving, so I am really excited to come back here for the 24 and try to win this thing. I have been driving with Action Express Racing at this track for the last four years so I pretty much know everything that is happening and it just makes life much less difficult. It is never easy here, but returning with the same team makes it less difficult. The team knows how I operate and I know how they operate as well. I think the race is going to be really good."

João Barbosa, No. 5 Corvette DP: “It was a good test. Every time you have a chance to have a three day test, it is good. The track kept changing and we were chasing the car around for a little a bit, but that is not one of our biggest concerns. We were able to put a lot of miles in with the car and make sure all of the new components are reliable for a 24-hour race and we did a lot of miles so we are really happy with that and looking forward to coming back for the Rolex 24 hour.”

Brian Frisselle, No. 9 Corvette DP: “Overall the test was positive for reliability. The test showed pace for the cars and we will come back and have a good 24 hours, this team knows how to do it. I expect this year's Rolex 24 to be a very tough race just because of all of the crazy traffic and difficult cars to deal with. This will be my 10th Rolex 24 and I think we have a great shot this year.”

Burt Frisselle, No. 9 Corvette DP: “It was a great test. It was really fun working with the Delta-ADR guys and I am really excited to come back in a couple of weeks and get after the race. Action Express Racing works very hard and I think we will be perfectly prepared at the end of the month. I am just excited to be back and testing with Action Express because they are one of the best.”

John Martin, No. 9 Corvette DP: “All in all this was a very good test. We didn't quite do the amount of laps we wanted just with the way it worked out and red flags. I didn't have an opportunity until this morning to really have a decent run, but the morning went very well. Obviously this is a new car, new circuit and new team for me so there has been a lot to learn. It wasn't until the last couple of laps that everything really clicked with the car and everything. But now I am really looking forward to coming back for the race."