Stefan Johansson believes that having an American driver competing for the Formula 1 World Championship would be huge for the sport, but that Liberty has already cracked the U.S. market.

The 2022 F1 schedule will include two races in America for the first time since 1984, with a new event in Miami joining the round at Circuit of The Americas in Austin, TX, first held in 2012.

However, there are currently no U.S. drivers on the F1 grid. Alexander Rossi was the last American to start a Grand Prix back in 2015, while the last American full-timer in F1 was Scott Speed in 2006-’07. Michael Andretti, who recently withdrew his attempt to buy the Alfa Romeo/Sauber team, had planned to transfer Colton Herta from his IndyCar team to F1, but the deal fell through last month.

Ex-Ferrari and ex-McLaren driver Johansson told Motorsport.tv’s Juliana Chiovitti that he believed a U.S. presence on the grand prix grid would be helpful, but only if he or she is prominent.

“Certainly it would help tremendously,” said the 65-year-old Swede, “but it has to be a good one. You can’t just have someone who’s at the back of the grid.

“If someone is actually fighting for the championship it will be massive, I think.

“But I think Liberty has done a terrific job. I think they’ve finally cracked the code here in America with this Netflix show [Drive to Survive]. I don’t know about you, but I meet people almost daily now who are ‘experts’ on Formula 1 after watching Netflix – which is great!

Johansson also praised Indy car racing, in which he raced from 1992 through ’96. He remains a close observer and regular attendee at NTT IndyCar Series races, as manager of six-time champion Scott Dixon, race-winner Felix Rosenqvist and Road To Indy rising star Rasmus Lindh.

“I’m a huge fan of IndyCar because the competition rules are about as good as they can get, I think,” he commented. “The racing’s so close and no one really has a huge advantage, so it’s whoever gets it right on the day. Literally anyone can win on a given day – you roll the dice on strategy and the race just falls in your lap, or it can be the other way around, of course.

“That’s what I love about IndyCar, it’s so competitive and, to be honest, it’s really hard to make any predictions.

“But the cream always rises to the top. Scott had a bad a year last year, but I know he’s extremely hungry like he’s always been and unbelievably motivated. He’s going to be back and in good shape.

“Felix the same. He had a horrible start to the year, but he figured the car out as the year went by, and I think there’s been some changes in the team as well. So I think he’s incredibly motivated as well.

“But there’s another 25 really good guys there so anything can happen really.” 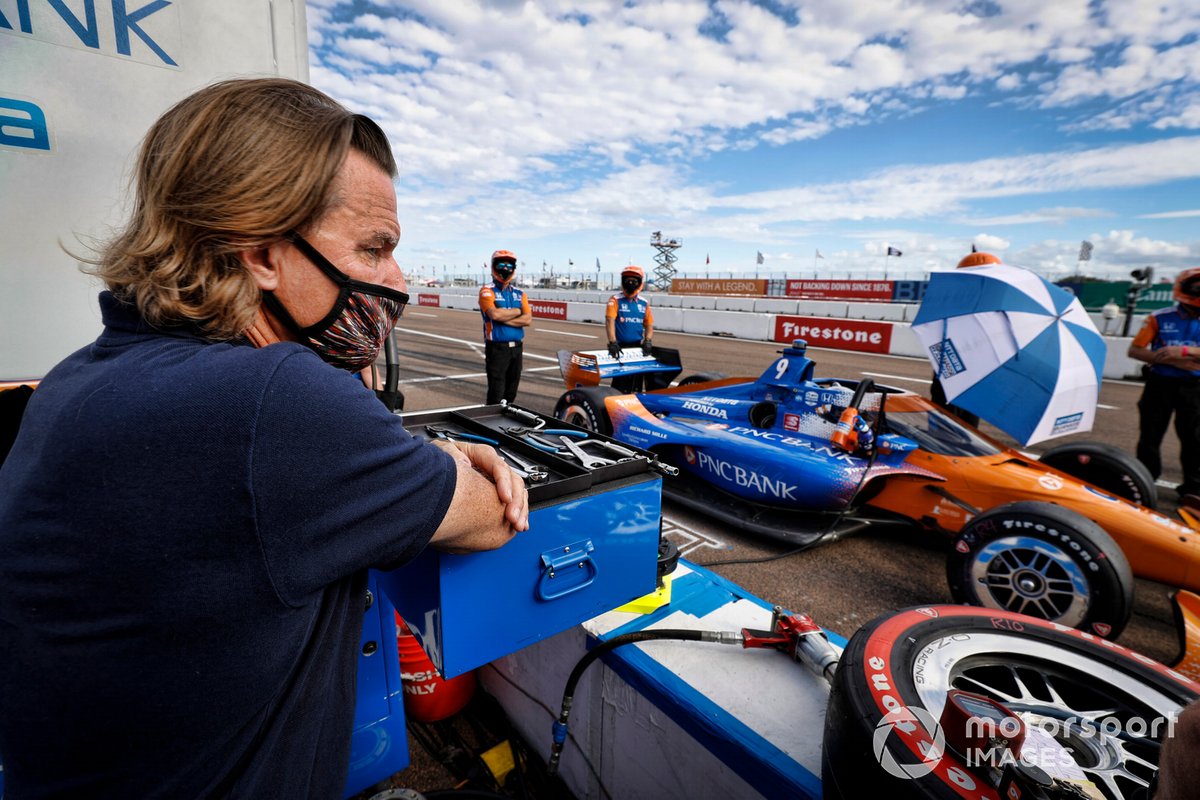 Stefan Johansson watches over one of his drivers, Dixon, at St. Pete last year.