The Trulli Formula E team's participation in the second round of the FIA Formula E Championship in Malaysia remains in the balance. 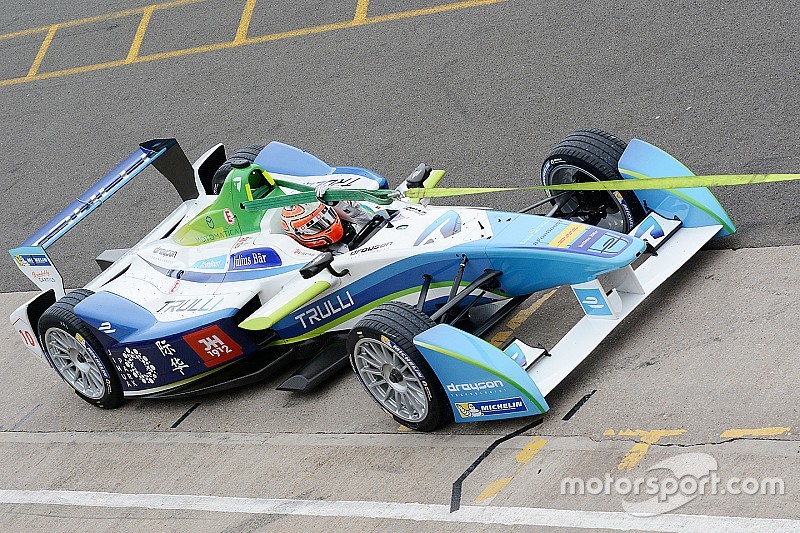 The Italian team was unable to take part in the Beijing meeting after its motors and inverters were not released by Chinese customs. The team was removed from the entry list as it could not present its cars for technical checks.

Speaking exclusively to Motorsport.com, Trulli team principal Lucio Cavuto explained the full story of how the team came to miss the opening round in Beijing this weekend and how their immediate future depends upon whether they can freight their parts directly from Beijing to Kuala Lumpur next week.

“We delivered our inverters and our motors by our own freight and not by the championships logistics, which is with DHL Motorsport,” Cavuto told Motorsport.com.

“The package landed on the October 8 and since between then and October 17, we could not get answers on a release from the customs people.

"So we then asked DHL Motorsport if they could please help us clear our case. We involved Formula E Holdings and also Mr. Steven Lu from NEXTEV who helped us a lot. So, last Wednesday we received an email from DHL Motorsport saying we had a green light for the package.

“We received another email on Thursday morning saying it was a red light and it was a big problem,” added Cavuto.

“We did all the papers and the requests of Chinese customs but the situation is that this case is still there at customs now.

“The next step we took was to speak to Mr. Alberto Longo (Deputy CEO of FEH). We are now trying to get the case from Beijing to Kuala Lumpur for the next round via DHL.

"We hope this happens and they will deliver because if we have to handle ourselves then we have to go back to Italy and deliver to KL, and we could have the same issues.”

The exact reason as to why the package would not be released by the customs officials remains unclear.

The absence of any running for Trulli is likely to have a big knock-on effect as the second round at Putrajaya is only a fortnight away.

And immediately after the Malaysia round, the cars will have to be readied for transportation to Punta del Este for the third round in December.

“For sure it will affect our performance and we have lost big track time,” stated Cavuto. “The reality is that we came on board in Formula E in July [of 2014] and all the other teams were there since the October before that.

"You cannot catch up the time for nothing, you have to work and we are working like hell and investing in our project."

Cavuto explained that the late call on confirming its Motomatica deal did have an effect on difficulties with the project, saying: “We chose not to go back to the McLaren (season one motor) because we invested a lot of money and work with the new powertrain.

"We started projecting this plan since last November, but we only got final approval from the FIA at the end of February, so our engine was in our engineers’ minds then - but we only started building in March. I believe that we have one of the best engines, I am sure.

"Our engine was ready in Monaco and we introduced it to the FIA then."

“The inverter is not an easy job,” he added. “We started in March and to do that in five months  - you go to any company in the world and ask for a high performance inverter they will say 12/13 months at least. We did it in five!”

Trulli issues rooted in start of season one

Cavuto believes that the current issues the Trulli Formula E team are facing dates back to their initial entry into the championship back in the summer of 2014.

Trulli effectively took over the slot originally intended for the Drayson team and only completed the deal in July 2014, two months before the first race at Beijing in September 2014.

“When you finish in last position like we did in season one, you are never in a very good position,” claimed Cavuto. “This is the reality.

"The performance was not perfect last year but from the management side it was tough because we had really just one month before China last season, so for us the people we chose [to run the team] were not the best on the market. We have a much better team this year, a better structure."

“Last year we had a big performance issue because we had a dramatic mistake on the cooling system. Before we received our cars, the first test was run at Donington by Drayson,” he continued.

“We found that from the radiator that they linked first the motor and then the inverter. This means [the inverter] was being ‘eaten’. This is the heart of the car and needs to be cool to be efficient."

“When we came to have possession of the team at Donington, our team copied what Drayson did and we had four cars with this dramatic mistake.

"I am very upset because you cannot burn up your season for this mistake. We only realised this summer when we were changing the car over for season two and our new Brazilian mechanic saw it and said: ‘Are you crazy, you are cooling the motor first and not the inverter.’

"Our crew last year did not understand this basic and fundamental mistake."