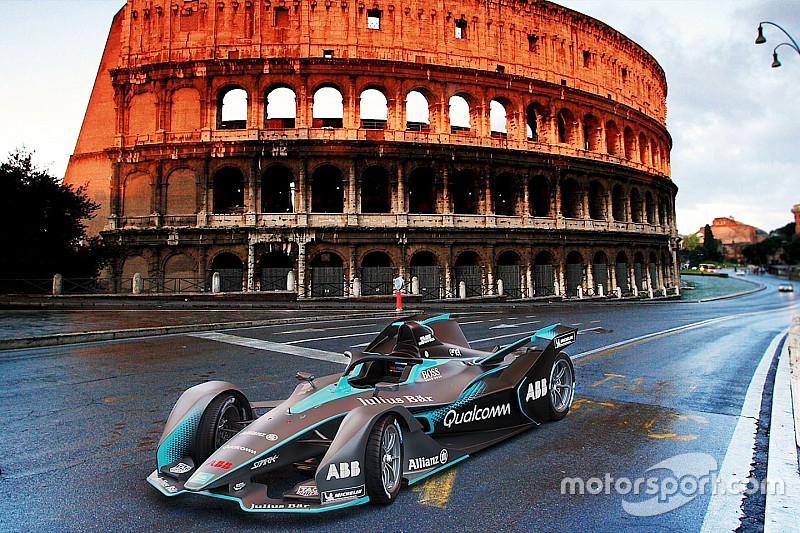 The second-generation FE design was revealed earlier this week, and the last known version of the FIA's technical roadmap for the series planned to increase battery and powertrain performance to go alongside the striking new chassis.

If the peak power output of the new car increases to 250kW (335bhp) as expected it will have an extra 50kW (67bhp) in qualifying compared to the current car.

Di Grassi told Motorsport.com that the performance boost, coupled with the low-drag philosophy of the new car, would mean stepping from the current limit of around 225km/h (140mph) increasing to speeds over 300km/h (186mph).

"The car is more efficient and it has more power," di Grassi said. "In the current configuration, with the power we'll have available, on a long straight this car could surpass 300km/h (186mph) without a problem, I would expect.

"When the car starts to go over 300km/h you're talking substantial speeds, nobody will be able to say the car is not fast."

Di Grassi suggest that FE should consider redesigning its circuits for next season so they incorporated longer straights, which would show off the speed of the cars and also present more overtaking opportunities.

"We're reaching an interesting point," he said. "The car is very difficult to drive, it's efficient, it has more performance.

"I think FE should start designing longer straights, I don't see any reason why it should not have 700/800m straights on the circuits, to adapt the circuits we race on to these new cars.

"Not change them fundamentally, but fine tune them to have more top speed and more slipstreaming and increase overtaking possibilities."

One criticism of FE is that the cars are too slow for a top-level single-seater.

The low-powered, low-downforce machines had near-GT3 levels of performance when they tested at Donington Park up to the summer 2016, and the latest crop of powertrains has improved the pace by a further few tenths of a second.

Di Grassi said it was important to remember that FE cars are designed to race on street circuits and therefore comparing performance to normal circuit-based championship was futile.

"You still can't compare the level of performance to F1 or LMP1-Hybrid," he said. "A car with this kind of performance would not be able to race on our tracks – it's impossible to put a Formula 1 car around the Paris FE track."

The tech that's so crucial to Formula E's new car