Lucas di Grassi has called out fellow Formula E champion Sebastien Buemi for his “incredibly stupid manoeuvre” that caused the Audi driver to crash out of the second Rome E-Prix.

In their battle for eighth place on lap seven of the race, di Grassi appeared to get caught across the nose of the Nissan e.dams car of Buemi on the approach to Turn 7.

Di Grassi, who retired from the race lead on Saturday with a mechanical failure, then careered into the wall and stopped down the escape road with broken suspension.

A five-second penalty was added to Buemi’s race time, which dropped the 2015-16 title winner from seventh down to an eventual 10th, and he was also handed two penalty points on his license.

"There is the perspective of the rules and the stewards of the race. Buemi got a penalty. It was an incredibly stupid manoeuvre.”

The Brazilian took aim at a lack of pace for the Nissan e.dams team all weekend, with it unable to introduce its new car in Rome as originally planned. He added that with an eventual 16 laps remaining, Buemi should have bided his time.

Di Grassi said: “He was just slow. He was slow all weekend and he was slow also in that specific race. I was doing my normal race. He had attack mode. He was trying to overtake me back.

“To be honest, he could have overtaken. We had the whole race to go, there was no hurry to do this. He decided to change, last minute, from inside to outside.

“He ended up touching the rear of my car, and then ended my race and ended also his race. It's a shame.”

But Buemi fought back against the stewards’ decision, adding that di Grassi had lined up the overtake too late and left him with no time to react.

Buemi assessed the incident as “unfortunate”.

He told Motorsport.com: “Obviously, I got penalised for that. I don't really agree to be honest. This is the way it is.

“Arriving with attack mode, much more power. In my opinion, he moved so late that I had no time to basically react. I don't mind him closing the door. It's no problem, I go on the other side. But he let me think that he was going to not close the door.

“So once I committed for the move, he came to the left and at the same point he did that, I touched him.” 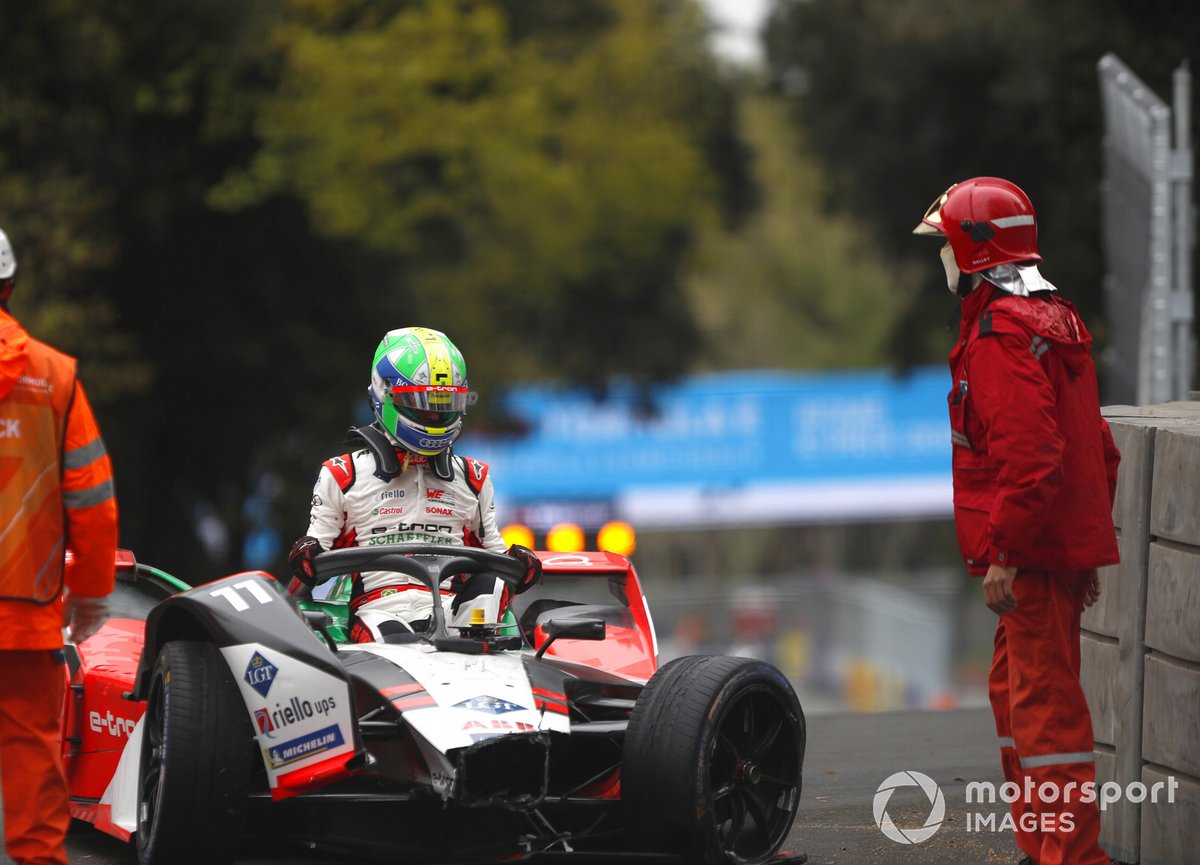 Lucas Di Grassi, Audi Sport ABT Schaeffler, Audi e-tron FE07, climbs out of his car after crashing out

More from
Audi Sport ABT Schaeffler