In lieu of the energy allowance reduction formerly used to emphasise energy management in a safety car hit race, races will now receive extra time to replace the lost racing laps taken by a caution or safety car period.

De Vries picked up the lead on the second lap from Alexander Sims, who had initially got past the slow-starting Mitch Evans – who went to the back of the field having been unable to get away from his nominal pole position off the grid.

With a slender margin over teammate Stoffel Vandoorne, de Vries set the pace in the early laps as the pair cruised away from Sebastien Buemi, who also made a move on Sims early on.

Vandoorne then grabbed the lead midway through the race, igniting a battle between the two Mercedes drivers over the second half following a lap 19 safety car, which bunched up the field.

Holding the lead for the initial flurry of the laps after green-flag running resumed, Vandoorne then conceded control of the ‘race’ to his teammate, before picking it up again three laps later.

But as extra time was introduced, adding an extra six minutes and 45 seconds to the total run-time, de Vries picked up the lead with a lap remaining and crossed the line first.

Edoardo Mortara swiped second from Vandoorne at the end, with Venturi teammate Lucas di Grassi fourth on the road to create an all-Mercedes top four lock-out. 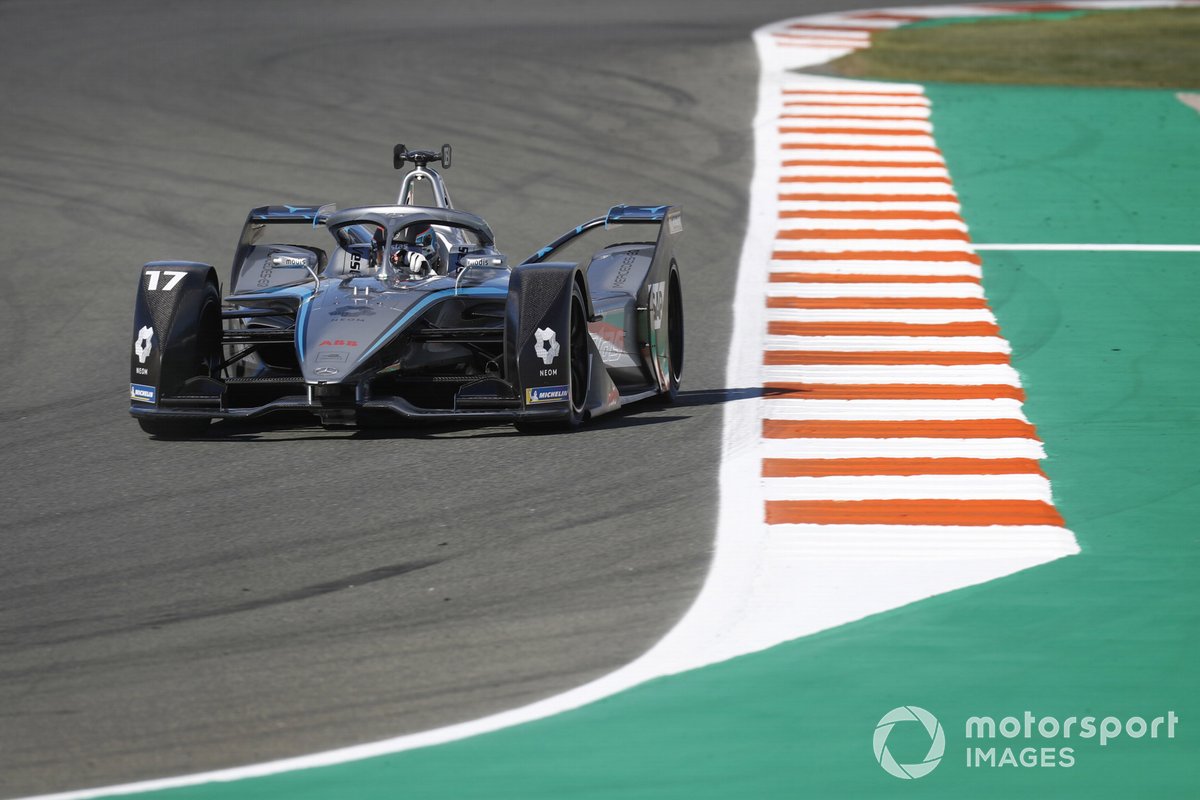 Buemi picked up fifth at the death from new Nissan teammate Maximilian Guenther, as Jake Dennis made his way through the order to cross the line seventh after starting 14th.

Oliver Rowland was eighth from a recovering Sam Bird – who, like Jaguar teammate Evans, was unable to get off the line - as Pascal Wehrlein completed the top 10.

Jaguar later explained that the inability for both cars to launch off the line was a legacy of its software retaining the trips and limits it uses for its powertrain testing at base.

Both drivers were able to reset the cars to clear those limits and finished the race simulation.

Da Costa bounced back in the final half-hour of free running, immediately setting a 1m27.022s to set the outright benchmark – easily besting Cassidy’s best time from the race simulation.

Envision driver Cassidy then returned to the top of the time sheets shortly after, punching in a 1m26.776s to collect top spot, but da Costa swiftly deposed him from the headline time with a 1m26.769s, going quickest by 0.007s.

Jake Dennis ended the session third fastest with a late lap to nudge Oliver Rowland down to fourth, as de Vries logged the fastest first sector en route to the fifth-fastest time.

Evans and Bird made up for a difficult morning with the sixth and seventh best times, beating NIO 333’s Oliver Turvey, while Vandoorne and Sims completed the top 10.

Rookie Dan Ticktum briefly stepped into the top 10, before his lap was pinged for track limits – leaving him last in the timesheets behind Powell.

Formula E releases teaser of Gen3 car ahead of 2022 debut