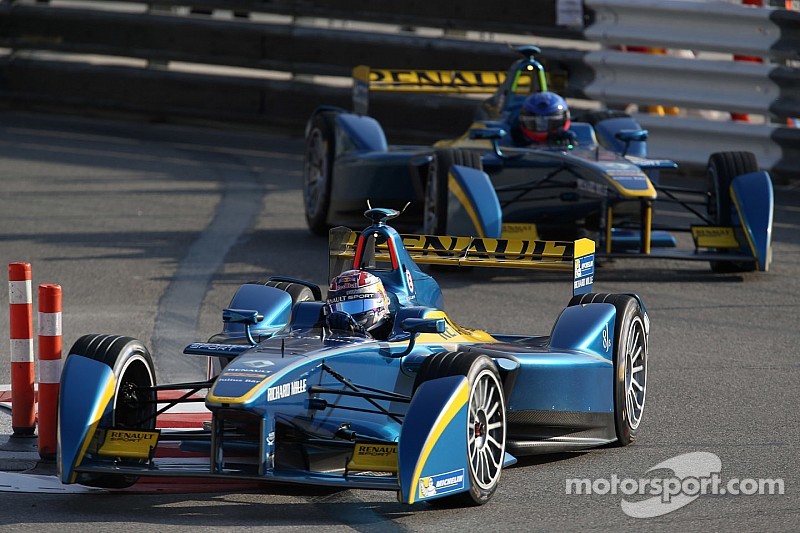 Sebastien Buemi claimed victory at the first ever Monaco ePrix this afternoon after an enthralling race on the streets of the Principality.

It was the Swiss drivers' second victory of the season and the first time so far that a driver has won more than one race in the inaugural Formula E season.

Pole sitter Buemi took the chequered flag 2.154 seconds ahead of the second placed Lucas di Grassi in his Audi Sport Abt Spark-Renault.

Rounding out the podium was Nelson Piquet Jr in the NEXTEV TCR machine despite a late race effort to take second from Di Grassi.

"It feels great, it is a good weekend for me and the team, especially after the issues I had at Buenos Aires," said Buemi. "From pole to win it is an amazing feeling to win at Monaco, I couldn't be happier."

The race began with a multiple accident on the run out of Saint Devote which accounted for Bruno Senna and Jaime Alguersuari.

Several other drivers were significantly delayed in the subsequent ‘concertina effect' including Tonio Liuzzi, Daniel Abt, Loic Duval, Salvador Duran and Jean-Eric Vergne.

Senna was lucky to escape injury after his car rode over the back of Abt and almost rolled over.

"I'm very stiff but OK," said Senna. "It is very unfortunate. I don't know what happened as I had Sarrazin on my left and then Abt just stopped dead right in front of me and I went over."

The accident eventually also took Loic Duval and Daniel Abt out of the race with accident damage.

The first safety car lasted just three laps before the race went green on lap three. Piquet immediately utilised his Fan Boost and pulled a decisive move down the inside in to the harbour-front chicane which links back on to the familiar Grand Prix circuit.

Buemi and di Grassi pulled out a small gap to third placed Piquet Jr and together traded fastest lap times. But Piquet soon ate in to the gap to the leaders before the pitstops and brought himself back in to play for the second portion of the race.

Di Grassi pitted on lap 24 in an attempt to get an undercut on Buemi, who went two laps longer than his rival.

Buemi emerged back on to the track just ahead of di Grassi and the two ran side by side from the exit of Saint Devote to the hairpin, touching briefly.

That was as close as the Brazilian got to the e-dams Renault, as soon Buemi extended the gap, initially to over three seconds and was then able to control his pace to the chequered flag.

With ten laps of the race remaining Piquet hunted down his nemesis di Grassi and latched on to the tail of Audi Abt racer.

An attempted move at the hairpin and a subsequent locking of brakes five laps from the end, ultimately cost Piquet another chance in the final laps. Piquet himself came under fire from a charging Sam Bird on the final lap but just held on for the final podium spot by 0.167s.

The close battle for third place raged for the majority of the race as Bird's Virgin Racing entry first overtook an out of sorts Nicolas Prost and then jumped Jerome D'Ambrosio's Dragon car in the pits.

Bird initially harried Piquet but was ultimately unable to wrest the place from the former Renault F1 driver and had to settle for fourth ahead of D'Ambrosio, Prost and Stephane Sarrazin.

Star performers further down the field included Scott Speed who claimed eighth after shrugging off a disintegrating front wing early in the race to somehow finish his first stint with barely reduced pace. The American claimed three points after a difficult qualifying which was beset by brake problems.

The Amlin Aguri team worked right up until the final moments before the start of the race to repair the car and ultimately score three precious point.