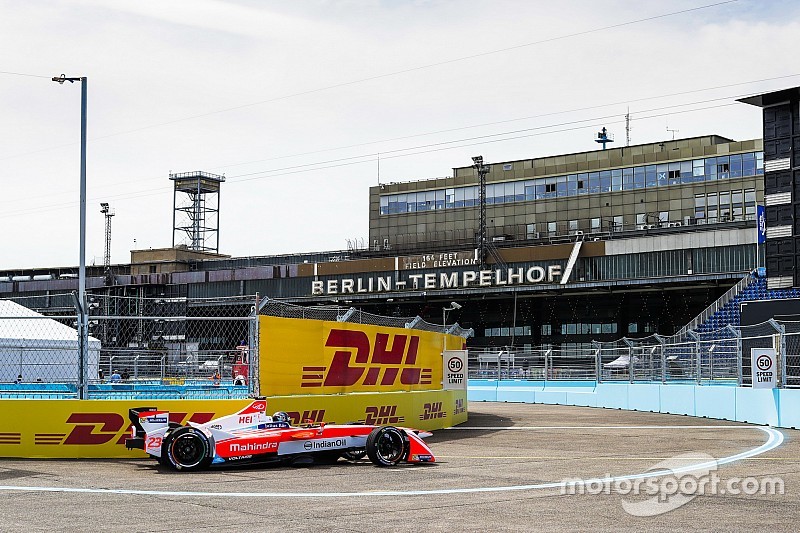 Nick Heidfeld headed his Mahindra teammate Felix Rosenqvist in practice for the first of Formula E’s two races in Berlin this weekend.

The German driver shaded teammate Rosenqvist in the second session with a time of 1m08.070s.

Rosenqvist, who predicted before the event that the new Tempelhof circuit would suit Mahindra, improved in the final third of FP2 but fell two hundredths of a second shy on a 1m08.092s.

It meant the Swedish rookie was still quicker than the fastest time from the opening session, topped by championship leader Sebastien Buemi.

The Renault e.dams driver went for a full-power lap in FP1, when many only ran at 170kW, but left it until the closing moments of FP2 before lapping at 200kW.

He had a scruffy lap and only wound up ninth-fastest.

His nearest championship rival Lucas di Grassi is nursing a slight injury after spraining his left ankle, but improved late on to finish FP2 fourth fastest, behind Venturi’s Maro Engel.

Stephane Sarrazin will go into his first qualifying session for the Techeetah team having set the fifth-fastest time in FP2.

Jose Maria Lopez was next up ahead of DS Virgin teammate Sam Bird, with Sarrazin’s new Techeetah partner Jean-Eric Vergne and Oliver Turvey completing the top 10 either side of Buemi.

Formula E is running on a different layout at Tempelhof to the one it used in its inaugural season.

The series has returned to the former airport after last year’s race took place on the streets of Berlin close to the Tempelhof site.

Its revised 10-corner circuit, and the abrasive airfield surface, caused problems for several drivers in FP1 – most notably Nelson Piquet, who hit the wall exiting Turn 5 but made it back to the pits.

The only red flag across the two sessions was caused by Mitch Evans, who stopped his Jaguar approaching the Turn 9 hairpin midway through FP1.