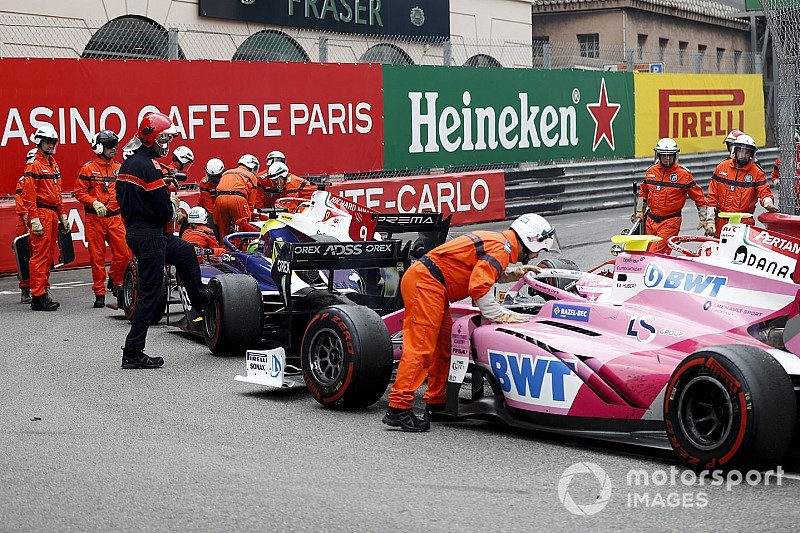 Formula 2 stewards have admitted that over half the field was placed one lap down by mistake in the feature race in Monaco, but said there was “no equitable method to resolve this”.

After the wreckage was cleared, the cars were reordered in the pits correctly, but the drivers which were stuck behind the incident and therefore completed one fewer lap than the first eight cars were not given ample opportunity to unlap themselves as per the sporting regulations.

Article 42.3 of F2's sporting regulations states: "At the two-minute point, any cars between the safety car and the leader, in addition to any cars that had been lapped by the leader at the time the race was suspended, will be allowed to leave the pitlane and complete a further lap, without overtaking, and join the line of cars behind the safety car which left the pit lane when the race was resumed."

Motorsport.com had earlier reported that this regulation hadn’t been followed and that drivers were confused after the race.

Those cars were not given the opportunity to do this, and many raced on believing their times would be adjusted before the end of the race to remove the lap in lieu, but that was not done.

After a lengthy investigation, a report issued by the F2 organiser stated: “Article 42.3 of the 2019 FIA F2 Sporting Regulations specifies the manner in which the restart order is to be re-established at the restart.

“That process was not executed in that those cars originally in pit lane ahead of the leader as well as lapped cars were not allowed to transit the course and join the restart order at the rear.

“While this procedure negatively impacted the remainder of the race by putting significantly more cars down a lap than would otherwise have been the case, the stewards find no equitable method to resolve this error and accordingly leave the results from race one as they stand.”

Feature race winner Nyck de Vries said that he used an extra set of tyres to try and push for a gap after the red flag, as he believed the lapped drivers – all of whom had pitted for a mandatory tyre change, while the top seven would still have to pit – would become unlapped and threaten his victory. Points leader Nicholas Latifi added he’d taken “risks” in a bid to fight towards the top eight, which was not possible with his lap in arrears still applied.

In a separate incident, Luca Ghiotto was disqualified from second place in the feature race as his rack blocks weren’t deemed to be compliant with the regulations.