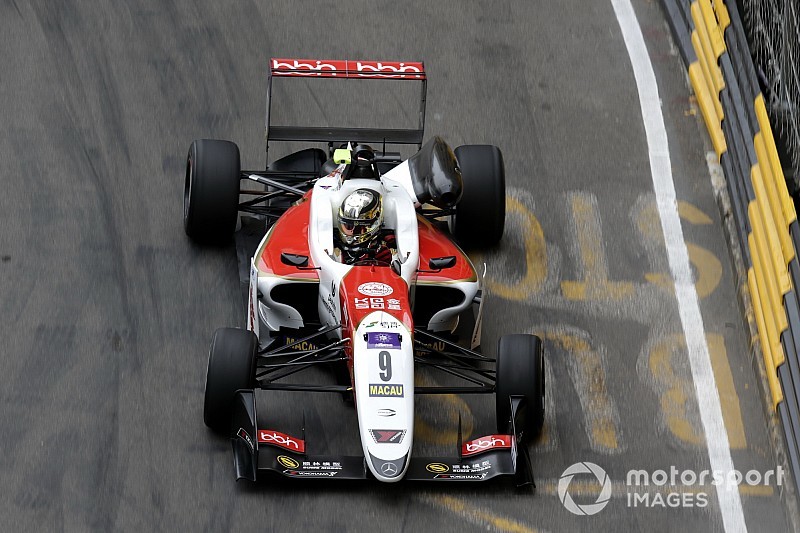 Formula 3 European champion Mick Schumacher’s bid to become the third member of his family to win the Macau Grand Prix kicked up a gear as he headed second free practice.

Times tumbled following yesterday’s red-flag-ridden first qualifying session, and Schumacher moved to the top of the times late on in his Prema Powerteam Dallara-Mercedes.

Unlike first free practice, where Schumacher also led the way, this time he did not benefit from a tow, and his lap was good enough to dislodge Ferrari junior Callum Ilott’s best in the lead Carlin Dallara-Volkswagen by 0.091 seconds.

F3 returnee Ilott’s finishing position means that he has been second in all three sessions to date this weekend on his fourth crack at the Macau GP.

“It’s the first time in Macau that I’ve played around with the car trying to optimise stuff,” said Ilott, “because normally you’re trying to focus on driving.

“I thought I’d find space on the track and just get on with it, because it’s better to just do laps than look for a tow, and the car’s good.”

The performance backed up claims from Vips that he should have qualified at least in the top three on used tyres in Thursday’s session, only for his quick lap to be ruined by a red flag.

Jake Hughes continued his impressive F3 comeback by taking fourth fastest for Hitech GP, and looking very flowing and quick on the circuit.

This was enough to head 2017 Macau GP winner Dan Ticktum, who in contrast to most of the field stayed out on the track throughout the session in his Motopark car.

Another Motopark driver, BMW DTM race winner Joel Eriksson, was quickest for more than half the session, but after his pitstop he tumbled to sixth as he became mired in traffic.

Nevertheless, Eriksson looked superb on track and remarked: “The pace is there and the feeling is there, and we are driving on quite shit old tyres at the moment.”

Marcus Armstrong began to show strong form on his Macau debut by taking seventh in his Prema car, one place ahead of B-Max Racing’s Alex Palou.

Ralf Aron was ninth in his Prema machine, with the top 10 completed by Carlin’s Jehan Daruvala, who like Ticktum stayed on track throughout the session.

A late red flag meant the last two minutes of the period were lost, after Toshiki Oyu crashed his Toda Racing car at Maternity Bend.

Oyu was also one of the drivers to cause yellow flags by taking to the escape road at Lisboa, with Enaam Ahmed (twice) and Sacha Fenestraz doing likewise.